For the original by Elenilce Bottari in Portuguese in O Globo click here. 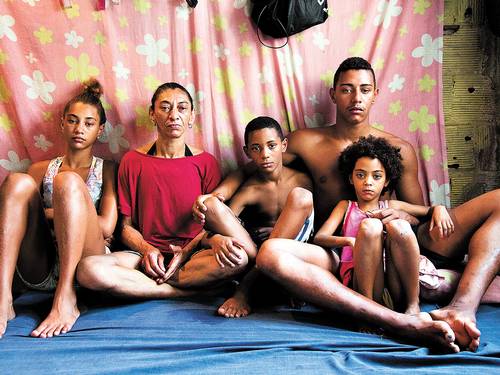 They have no doubt that “what they did to Bull was a great cruelty.” This is how residents, friends and family have described what happened to Rio resident Amarildo de Souza, who has been missing since July 14th, when he was taken “for questioning” by police officers of the Pacifying Police Unit (UPP) in Rocinha. Amarildo is an assistant bricklayer, born and raised in the community. In his 42 years, he never got above the poverty line and has always lived in the little known area of Pocinho, which is dominated by the drug traffic, with open sewers and many cases of tuberculosis. Father of six children, he shares with his wife, Elisabete, and his family, a one-room shack without a toilet, and the R$300 per month he earns on a building site in Copacabana.

“He lives in a drug traffic area, like everyone here, but he is not called Boi (Bull) because he is a criminal, but because he is strong enough to carry the sick from this part of the community on his shoulders, since mototaxis do not come to this area. I have been rescued and saved by him myself, when I fell off a tree and lost consciousness. I was 15 years old. Since then Boi has called me Seven Lives,” recalls Carlos Marques, 21, who, like others, has participated in protests and searches for Amarildo.

Arrested in front of the drink shop

The story that has terrified the family and makes the UPP police officers look suspicious started a day after Operation Armed Peace, which mobilized 300 police officers with 58 warrants. The goal was to arrest those drug traffic suspects that had never been arrested before by the police. Between July 13 and 14, 30 people were arrested, 22 of them based on the warrants. According to the police, the other eight were caught in the act. Boi was taken on the 14th, a Sunday, at around 8pm, right in the middle of the football match between Vasco and Flamengo, with his personal documents.

“He was in front of the drink shop, just about to go home, when the police officers arrived. Monkey Face (as one of the UPP officers is known) put his hand in Boi’s pocket. He complained and showed his documents. The police officer pretended to check it through the radio, but he turned around almost immediately and told Boi he had to come with them. Monkey Face knew Boi, and he was always teasing him and his family. That police officer is bad, he likes to humiliate the poor around here,” explained one of the men who witnessed the police raid in the drink shop.

Elisabete was home, waiting for her husband before frying the fish he himself had caught on Sunday with his cousin. Warned about his detention, she hurried to the UPP station on Rua Dois, and heard his last words.

“He looked at me and said the police officer had his documents. Then they said Boi would go home in a little while, and that we should not wait at the Parque Ecológico station. We went home and waited all night. My son looked for the commander, who said Amarildo had already been released, although this was not visible on the UPP’s camera images because they had broken down. They think poor people are stupid too,” said Elisabete.

Due to an ordinance of the Civil Police, cases related to disappearances are initially dealt with by the local police station, which is supposed to deliver a report within 15 days indicating if there is any evidence of homicide. Only then is the case taken to the Homicide Police. Amarildo’s case was registered in the 15th Police Station (Gávea) on July 16, a Tuesday. Chief officer, Orlando Zaccone, responsible for the investigation, heard from all police officers involved. He already has the list of GPS locations of the UPP’s vehicles, and he is trying to locate Amarildo on images on other cameras. He also found a contradiction: the police officers who were involved in the apprehension informed that they did not know Amarildo.

“We received information that there was a brawl between one of the police officers and Amarildo, and that this police officer had already arrested one of his sons once. Today (July 23), we have a meeting with the family and friends at the Human Rights Commission of ALERJ (Rio de Janeiro State Legislative Assembly). The objective is to gain their trust, so that they help with information. Our interest is to solve this case. I need more accurate information and I need to formalize a few complaints, also to be able to realize searches in the woods,” informed Zaccone.

As a way of gaining the family’s trust, the Chief Officer recalls the investigation of a case that occurred in Morro do Borel: he prosecuted five officers of the 6th Military Police Battalion (Tijuca) for the execution of four innocent people on April 17, 2003. Among the victims was Carlos Magno Oliveira Nascimento, 18 years old, who was studying in Switzerland and had gone to visit his grandmother in Borel.

Unreconciled with Amarildo’s disappearance, residents of Rocinha have already organized at least three protests. During two of them, they shut off the Lagoa-Barra highway (Rio’s principal thorough-fare between elite areas in the South Zone and Barra da Tijuca). They have also organized searches in an attempt to find the body or clues that might lead to solving the case. Last Thursday, a group found a hoe in an area close to the Parque Ecológico station, next to a mound of upturned soil.

“We found the hoe’s owner, who told us it had been taken from his house on Monday, the day after the arrest, by UPP officers. It might have nothing to do with it, but it might also be an important clue. We need search dogs and rangers, but that is exactly what the police are not providing here,” complained Rogério Vilas Boas, who participated in the searches together with William Roberts, one of Amarildo’s cousins.

The assistant bricklayer has had two encounters with the police: one for theft in 1989, when he was 18 years old, and one having been caught working as a carwasher in 2005. According to Elisabete, her husband, who was now working formally with an official signed work card, was about to realize a dream: “He was buying materials to build a second storey on our house. The bricks are there on the rooftop.”

Last Saturday, lieutenant colonel Paulo Henrique de Moraes, coordinator of the Pacifying Police, informed that the four police officers who took Amarildo to the UPP station “before he was released” have been suspended and they will do a refresher course. The four of them are freshmen from the Police Training Center. There have been other complaints from residents against them, accusing them of abuse of authority and brutality.

The commander also informed that he would analyze the tracker installed in all UPP vehicles in Rocinha, to check where the police officers have been. According to witnesses, on the day they took Amarildo in for questioning, there were two BOPE (Special Forces Battalion) vehicles covering the operations. However, these vehicles do not have GPS. When approached, the Military Police informed it would not give any more statements at the moment.