For the original article by the Popular Committee in Portuguese click here. 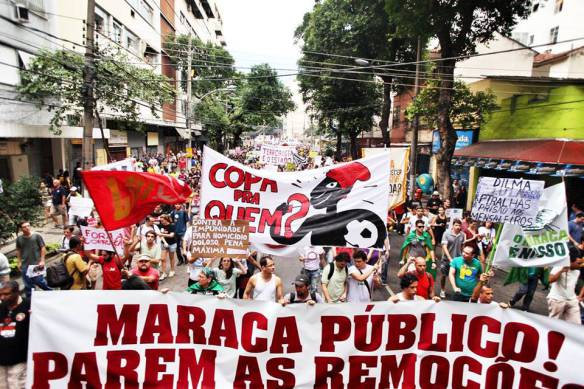 This Thursday morning (August 8, 2013), the Popular Committee on the World Cup and Olympics participated in a meeting with Rio de Janeiro’s Mayor, requested by the Mayor himself. Following three years’ discussion about the impacts of mega-events on the City, the Committee presented points that reflect the large number of issues it has come to monitor. The meeting finished with some commitments from the Mayor, such as: to once again declare the Célio de Barros Athletic Stadium and the Júlio Delamare Aquatic Park national heritage sites; to declare the Aldeia Maracanã and the Friedenreich Municipal School national heritage; to negotiate the maintenance of Vila Autódromo; to guarantee the permanence of the community Indiana (Tijuca); and to give information free on the works and impacts of the Olympic project, among others. Read the statement below:

The recent retreat of the state government in agendas related to, for instance, the Maracanã Stadium Complex, are nothing more than reactions to the popular mobilizations. People taking to the streets have sent a clear message to politicians: we will not accept living in a city for sale! We will not accept a city managed for private benefit!

It is within this context of popular mobilization that Rio de Janeiro’s Mayor, Eduardo Paes, began inviting several civil society organizations to dialogue, among them the Popular Committee on the World Cup and Olympics–a group that has been meeting over the past three years to debate the impacts of large sporting events on the city, events which are being used to legitimize the violation of basic rights.

On the morning of August 8, 2013, we met with the Mayor and officially handed him the latest version of the Dossier on Mega-events and Human Rights Violations in Rio de Janeiro, launched in May. We also presented some of the points that reflect the group’s accumulated understanding, from the right to housing to informal employment, questions related to the Maracanã Complex and the lack of public access to information on the Olympic project.

The Popular Committee on the World Cup and the Olympics registered in its dossier severe violations of the right to housing, affecting at least 40,000 people. The numbers are underestimated, because the municipality has not yet disclosed official numbers. Under threat of removal, families have to deal with uncertain futures, and they suffer intense psychological pressure to leave their homes, most of the time without having been given a motive. Many of the families already removed from 26 communities are now in a worse housing situation. The committee has declared the need to halt all current removals, in order to discuss the projects with participation of the impacted communities. The Committee requested the publication of the Mayor’s commitment in the form of a municipal decree.

The Mayor did not commit to stopping evictions. He argued that during his administration, evictions are only accepted in three circumstances: a) a situation of high-risk has been confirmed for families, and there are no possible solutions through containment works; b) construction along the edge of rivers and lagoons; or c) works meet a crucial need for a large portion of the population. When confronted with different situations, Eduardo Paes acknowledged that several projects that resulted or may still result in community evictions are been wrongly directed by the municipality, and he asserted that the on-going projects will be revised. The Mayor also committed to publish a decree that will establish clear rules concerning families’ resettlement processes. This decree will specify which cases, according to the municipality, would be liable for resettlement and the rules as to how this should be executed. According to the Mayor, there will be dialogue between civil society organizations and specialists.

In the case of the removal of Vila Autódromo, since the announcement of the Rio Olympics, residents have been receiving eviction threats through the media, dubious information, and they have been approached by city officials to accept leaving the community or risk losing everything. The Mayor has affirmed, on various occasions with shifting arguments, that Vila Autódromo would be removed. The Residents’ Association, supported by two federal universities, has elaborated a Popular Upgrading Plan for Vila Autódromo, which would take place without disadvantages related to the Olympics. The Mayor received the Popular Plan in August 2012, but kept his removal plans. The Popular Committee has defended Vila Autódromo’s stay and the full implementation of the Popular Plan.

The Mayor acknowledged that the process of Vila Autódromo has been badly conducted and he admitted, for the first time, he would consider the possibility of the community staying. He reported he had a meeting with the President of the Residents’ Association, Altair Guimarães, and that he has proposed to have a technical group of the municipality engaging in a dialogue with technical advisors and other partners selected by the community, and accompanied by the State’s Public Defenders office. He affirmed part of the community must be resettled, but that any decision on this matter will be made with the participation of this group.

Concerning the Indiana community, in Tijuca, the mayor committed to visit the community on Sunday, August 18th at 8.00am, to announce its permanence and the process of upgrading and regularization of the locality. In relation to abandoned municipal buildings in the City Center, Paes acknowledged they should serve as social interest housing. He acknowledged as well, the incapacity of his administration to make progress with such projects, but he signaled the will of the municipality to hasten the process in a dialogue with social movements.

Another issue raised by the Popular Committee was the right of street vendors to employment and our opposition to the use of less-lethal weapons by the Municipal Guard, which was allowed following the passage of Law 469/2009. One of the groups that most suffers with the actions of the police are street vendors, who might face even higher risks from such weapons by public agents, especially during large events. Paes asserted he will not cancel the use of less-lethal weapons, as solicited by the Committee. He only agreed to define the rules by which they will be permitted during confrontations between vendors and the police. The registration of vendors in 2009 left many without permission to work. The Mayor stated he does not plan a reregistration, but he wants to specifically discuss the situation of workers in the city center. He informed that meetings between street vendors, the police and the Secretary of Public Order are already taking place. He also guaranteed that public storage will be created to allow vendors to stow their merchandise without dependency on third parties.

Regarding the privatization of the Maracanã Stadium Complex, we stated that the municipality acted as a facilitator of the process conducted by the state government. The project planned the demolition of four important buildings in the surroundings. The day before the bidding process on the Complex was disclosed (October 22, 2012), the Mayor undeclared–through a decree–the Julio Delamare Aquatic Park and the Celio Barros Athletic Stadium as historic heritage sites. During this process there was no prior negotiation with athletes and users of the sporting complexes. In the case of the Friedenreich Municipal School, the Mayor did not make himself available to receive teachers and parents to negotiate the permanence of the school. When a project to declare the school a heritage site was put before the City Council, the Mayor informed he would veto it were it approved, and classified the initiative as “demagogic nonsense.” There was a proposal to declare the Aldeia Maracanã national heritage, which was overthrown by the ruling coalition.

In response to the request presented during the meeting, the Mayor committed to publish in this Friday’s (August 9) Diário Oficial a decree on the redeclaration of the Celio de Barros and Julio Delamare as preservation sites, and the declaration of the Friedenreich Municipal School and the Aldeia Maracanã.

The Popular Committee made its understanding clear that Maracanã Stadium should be recognized by the municipal and state governments as a public space of special interest to local inhabitants. In this sense, we demand the installation of the Glaziou Park, a project of the municipality that foresees the integration of the Maracanã Complex with Quinta da Boa Vista through the construction of this public space. The Mayor did not commit himself to this request, but he agreed that the area on which the park was supposed to be installed will have a public function.

Finally, we defend that ongoing projects in the city should have their information publicly disclosed, as guaranteed by law. However, the Committee and other entities have been encountering difficulties accessing crucial points in order to understand what is happening in Rio de Janeiro. Upon hearing this demand, the Mayor committed to making public all data on the following issues: the motives of each removal; the exact number of families removed or threatened; the resettlement areas; environmental and social impacts of works; public investments associated with public-private partnerships (PPPs); and bidding and signed contracts, as well as the source and the use of resources for each project. It was agreed that these data will be available publicly on the municipality’s website, but the term was not defined.

The Popular Committee on the World Cup and Olympics believes that dialogue with the government is part of the advancement of concrete agendas of popular struggles. We believe, however, that achievements are only possible through resistance efforts that expose the contradictions of an exclusionary and elitist city project.

We also know that these advancements further enhance popular mobilization in order to achieve an effective transformation of society and of an economic model that causes inequality and unacceptable privileges. It is in this sense that we reaffirm our willingness to dialogue, but we want to make clear that we will not abstain from continuing strengthening our struggle on the streets.

For a more just and egalitarian city.