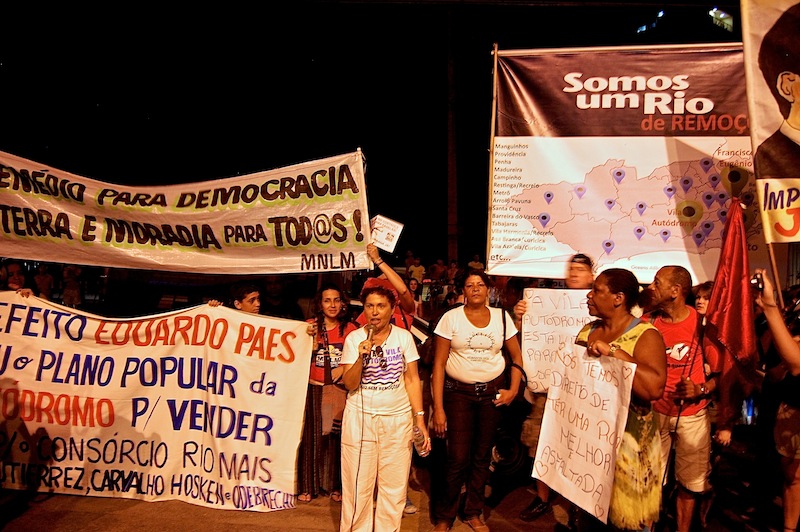 August 9, 2013–In a meeting today, the second in one week with residents and supporters of the community, Mayor Eduardo Paes agreed to the permanence of Vila Autódromo, a favela that has been creatively and doggedly resisting since its imminent eviction was announced by the Mayor, through the media, the night Rio de Janeiro won the 2016 Olympic bid in October 2009.

The Association of Residents, Fishermen, and Friends of Vila Autódromo (AMPAVA) released this public note:

The Residents’ Association of Vila Autódromo met with Mayor Eduardo Paes this Friday, August 9, 2013. The meeting consisted of the presence of the municipal secretaries of the environment and housing, the Sub-mayors of Barra da Tijuca and Jacarepaguá, a representative of the Municipal Olympic Corporation, and the Municipal Attorney General. At the invitation of the community, also participating were the State Public Defender’s Office, the two federal universities (IPPUR/UFRJ and PEPHU/UFF) that helped the residents draw up their 2012 Popular Plan, and the Catholic Church’s Pastoral das Favelas.

The Mayor recognized there had been mistakes in the treatment of the community and affirmed he is willing to open a round of negotiations based on the permanence of Vila Autódromo and its urbanization. The eventual cases of resettlement can be made in the same area, if a resident so desires. The mayor also presented options for resettlement in the Parque Carioca apartments or compensation at the market rates.

To continue the process, a negotiation group was created that will consist of technical advisers to the Mayor, residents, and their technical assistance. The decisions will also be submitted to resident assemblies. The community asserted that the base for the urbanization and regularization project should be the Popular Plan. Vila Autódromo continues in the fight for the right to housing, together with other communities at risk of removal. 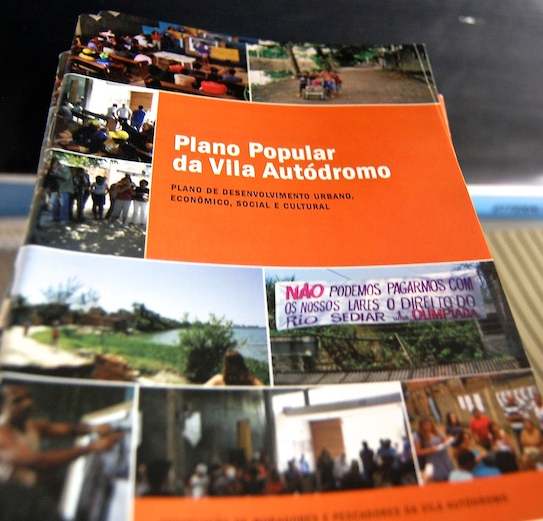 This commitment comes after over twenty years of the community’s organization to remain, a highlight of which was the presentation of the Popular Plan for on-site upgrading in August of 2012, and grown heated in the last few weeks by public employees pressuring individual residents to sign their homes away. The community responded by organizing a march through the surrounding neighborhoods last month which mobilized residents, allies and members of adjacent communities.

Yesterday, Mayor Paes met with Rio’s Popular Committee on the World Cup and the Olympics, a coalition of citizens, academics, and human rights organizations which developed in response to the Pan-American Games in 2007 and do research and advocacy work in defense of the right to housing, the right to the city, and democratic participation of urban transformations, a right guaranteed in the Brazilian constitution’s Statute of the City. The Popular Committee presented to the mayor their report on Megaevents and Human Rights Violations in Rio de Janeiro and discussed issues relating to the right to housing, the right to informal work, issues related to the Maracanã stadium and surrounding areas, and the lack of public access to information about Olympic projects.

The Popular Committee reported that they highlighted to the mayor the over 40,000 citizens facing threats to their right to housing and the fact that families from over 26 communities had lost their homes and were currently in lower-quality housing situations. Their press release states that,

Confronted with different situations, Eduardo Paes recognized that diverse processes that resulted or that can still result in the removal of communities were or are being ‘poorly conducted’ by the city government, and he affirmed that the processes underway would be reviewed. He made the commitment to publish a decree that will establish clear rules about the processes of resettling families. This decree will specify the cases which, under the evaluation of the mayor’s office, will experience resettlement and the rules for that. According to him, this will be constructed in dialogue with civil society organizations and specialists…The Popular Committee defended Vila Autódromo’s right to remain and the implementation of the Popular Plan. The mayor recognized that the Vila Autodromo process had been ‘poorly conducted,’ and he admitted for the first time that he would consider the possibility of the community remaining…About the community of Indiana, in Tijuca, the mayor committed to going to the community on Sunday, August 18th, to announce its permanence and the process of upgrading and real estate regularization in the area. 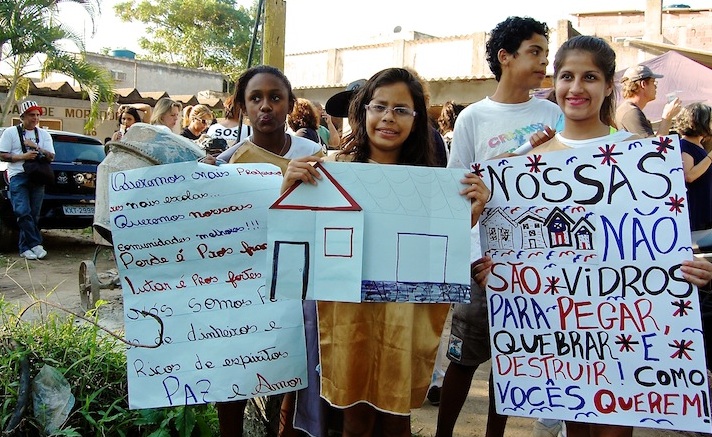 The meetings between Vila Autódromo and the mayor and between the Popular Committee and the Mayor come at the tail end of a week in which the Rio de Janeiro City Council was occupied by demonstrators in support of congressional investigation into bus company contracts and the Aldeia Maracanã indigenous museum adjacent to Maracanã stadium being re-occupied by indigenous groups, with a pledge from the state government to create a center for indigenous studies in the building.