On Tuesday, March 18, the Vidigal Residents Association, Intersectoral Forum of Vidigal, Albergue da Comunidade, and Catalytic Communities held the first of four debates discussing the process of gentrification underway in the community. As prices continue to rise, many residents are facing the difficult question of whether or not they can continue living in their homes, as well as what the process means for the social, economic and cultural make-up of the community.

Starting at 7pm in the packed amphitheater at the entrance of Vidigal, the first “Fala Vidigal” event brought together some 250 residents from both Vidigal and other communities across Rio de Janeiro to discuss the issues involved in gentrification. Marcelo da Silva, president of the Vidigal Residents Association, hosted the event, introducing leaders of several organizations and communities who gave presentations and spoke from a number of angles about the gentrification process. 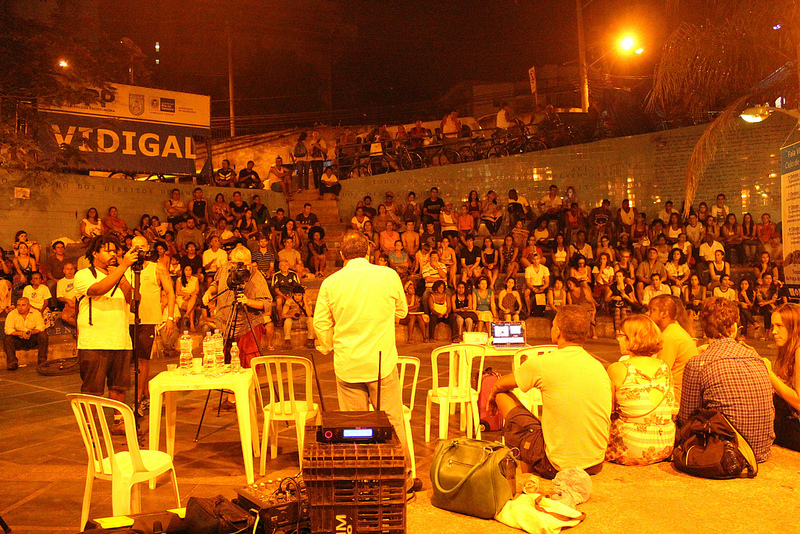 The first half of the debate consisted of presentations designed to set the stage for the open debate that followed. Paulo Muniz, a life-long resident and musician involved in the 1970s battles against eviction in the community, launched the event by presenting this important history of Vidigal. He was followed by Dora Figueiredo, a 30-year resident and sociologist who explained the origins of favelas as affordable housing. Theresa Williamson, city planner and Executive Director of Catalytic Communities, then explained the concept and process of gentrification as it traditionally unfolds in other contexts, then applying this to the Rio context. In sequence, journalist and doctoral candidate Pedro Barreto discussed the role of the mainstream media in the process. And finally, Sara Junger, resident and founder of Albergue da Comunidade, presented her organization that organizes responsible favela home-stays intended to safeguard residents’ ability to stay in their homes and preserve local culture by ensuring long-time residents, rather than outside speculators, are doing the hosting of visitors. Sara spoke about the role and initiative of the residents of Vidigal. 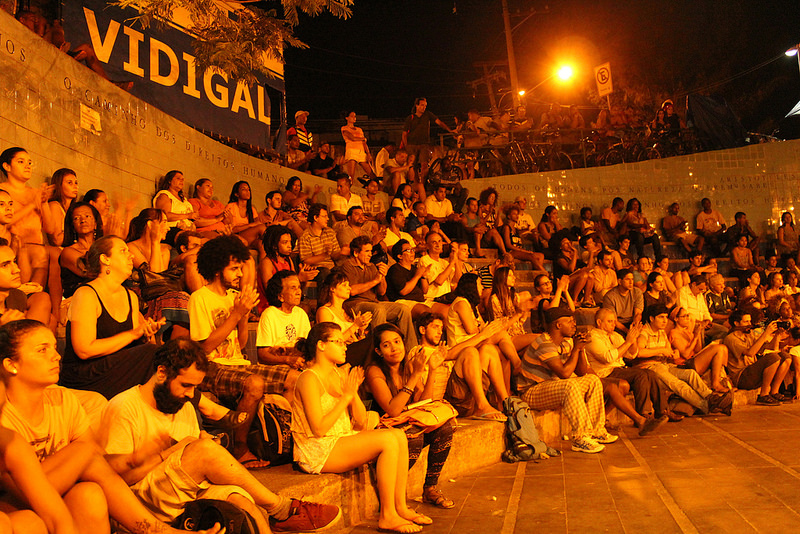 Following these presentations, the debate opened to the public, with residents and leaders of other communities providing eloquent and deeply troubling testimonials. The first few speakers were leaders of various communities around Rio who discussed the similar nature of problems in their communities, energizing the crowd. André Constantine, a resident of Babilônia and member of the Favela Não Se Cala movement, set the mood of the debate, passionately stating, “We’re already living [the process of] gentrification…We need to be united. Wake up resident! Wake up Vidigal! Wake up favelas! We can’t let this happen and let people who are part of our history leave.” By the end of his speech, the entire crowd was excited, with many ready to speak about the problems they are facing. He was followed by testimonials from leaders of Indiana, Vila Autódromo, and neighboring Chácara do Céu.

A series of residents of Vidigal came forward and made impassioned speeches. Aline Fernandes, president of Vidigal’s Women’s Association (A.M.A.R.), took to the microphone and immediately declared “I don’t see anything good about gentrification,” and talked about how the current processes in the community negatively affected female residents who were excluded from recent economic development in the community, and youth who didn’t know whether they’d be able to grow up in the community their ancestors had been raised in.

A resident, Danilo, married to a lifelong resident, was removed from his home in 2010 due to stated risk by the authorities and given a monthly rent check of R$400, and spoke about how the rent in Vidigal has increased to a minimum of R$800, and most recently has lived with his wife and four children in a basement, before giving up on life in their community for the outskirts of Rio–the Baixada Fluminense–two hours away. Danilo describes his anguish: “[My kids] lost their friends because the City tricked us. With R$400 I can’t live anywhere…I can’t take this suffering anymore. The rent is too expensive. I don’t have conditions to pay R$800 here in Vidigal. I have a job, as does my wife. But we couldn’t afford to stay in Vidigal any more…My house is still there now, why don’t they just build a containment wall that will benefit various residents in the community?” Many more residents spoke about their concerns and frustrations, engaging the packed square in a lively debate and setting the stage for the the next events to be held in Vidigal.

The next debate scheduled for April 8 will focus on what residents of Vidigal want for the future of their community: what qualities they don’t want lost in the process underway. Existing assets of the community that residents want preserved will be detailed, as well as challenges residents want to see addressed. This will be followed by a May 6 debate where new entrepreneurs entering the community will be given an opportunity to share their intentions for the community. The final debate, on June 3, will invite public authorities to discuss their plans for the community, and hear residents.

For more information on the debate series, click here. Read local media coverage of the debate in the Jornal do Brasil, LECC, and O Dia.