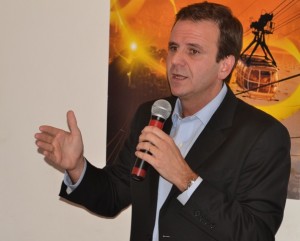 On Monday, April 28, 2014, Rio de Janeiro’s Mayor Eduardo Paes spoke to a small but energetic audience at a closed-door OsteRio event. His talk was in response to a “crisis of credibility” that has recently engulfed the city’s hosting of the 2016 Olympic Games. During the talk, Paes walked the audience through the current state of Olympic preparations, the budget, and most emphatically, the non-sporting legacy of the games.

Rio de Janeiro’s 2016 Olympic preparations have recently come under international scrutiny. In an ironic twist of fate, only hours after Paes’ talk the International Olympic Committee (IOC) vice-president John Coates declared Rio’s preparations the “worst” he had ever seen. The week before, The Guardian columnist Simon Jenkins wrote a strongly-worded critique of mega-event staging, asking whether Rio had the “guts” to “be the first city to haul the Olympics back from its fixation with money and buildings and […] fashion a sensation from a disaster.”

Paes defended that most of the Olympic infrastructure is close to or within the deadline for delivery, except for the Deodoro cluster, which will host sports such as kayaking and mountain biking. He also provided a meticulous breakdown of the Olympic budget, in an effort to quell anger about excessive public spending on mega-events, showing that most of the 2016 Games is being funded through private initiative or public investment in “legacy” infrastructure. 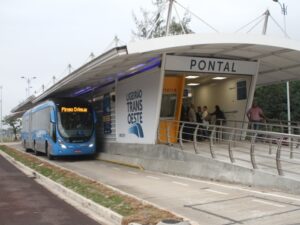 Mayor Paes’ message was, ultimately, a defense of this Olympic legacy. The Games, he argued, are a means to accelerate urbanization projects that the city has needed for a long time. “We use the Olympics and the World Cup to do things that were projected our whole lives,” he stated. These lasting legacies are infrastructure works such as the Bus Rapid Transit (BRT) lines, water storage and flood prevention infrastructure, and the regeneration of the Port area–all of which he describes as “important for the city,” and ultimately, he claims “have nothing to do with the Olympics.”

While Paes argued that the BRTs will improve mobility for the urban poor in the city’s North and West Zones, critics have challenged that the transport lines do not address the broader transportation demands of the metropolitan region, and will instead lead to continued real estate speculation in Barra de Tijuca and spacial segregation as these feeder routes facilitate the sprawl of low-income areas to the extreme urban periphery and therefore exacerbate inequality. Academics have often criticized an obscure or unobtainable “legacy” as the legitimizing discourse for the Olympics, an example of which is Jay Oakley and Doralice Lange Souza’s 2013 paper ‘Sport mega-events: Can legacies and development be equitable and sustainable?’: “As the cost of hosting sports mega-events has become excessive, the traditional sport-for-good narrative has been combined with or replaced by a sport-for-development narrative.” 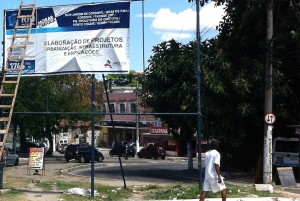 Once the Mayor’s talk was over, the floor opened up to questions. Paes was immediately asked about the absence of the Morar Carioca program from his talk, a favela upgrading program that pledged to urbanize all Rio’s favelas by the year 2020. He assured the audience that it was ongoing, but whereas Paes announced in 2010 that the Morar Carioca program would be part of the Games’ legacy for the city, on Monday night he emphatically and repeatedly denied its relationship to the Olympic project. This response comes just one week after Jenkins stated that Morar Carioca would have been a true legacy, calling it, “one of the most imaginative urban renewal projects I have seen anywhere.”

RioOnWatch asked the Mayor about plans for the urbanization of Vila Autódromo, following his assurances in August 2013 that families who desired to do so would be permitted to remain, being resettled within the community if necessary. He argued (along lines recently promoted by newspaper O Globo) that most of the residents wanted to leave Vila Autódromo to live in the “super-beautiful” Parque Carioca housing complex, and were protesting against the Public Defenders’ Office for preventing them doing so. (This refers to a controversy in which lawyers in the Public Defenders’ Office filed an injunction preventing house demolitions, which was erroneously portrayed as one preventing residents from leaving.)

On the urbanization of Vila Autódromo, Paes gave the following answer:

“We are developing the plan for urbanization, we will present it soon after resolving all the related issues, because it is difficult to prepare a plan for urbanization when there are so many people coming to us looking to leave. So we are going to see what remains of the community. And what remains, the people who want to stay, so long as they are not in the access areas, we will urbanize as I promised… This will arise soon.”

Activists allege that this calculated response is further evidence that the Mayor’s true intentions are to remove the entire community of Vila Autódromo. His answer reveals that the political priority is resettling families to Parque Carioca, with little apparent concern for the longevity of the community, despite the existence of an alternative, international award-winning People’s Plan–developed by residents and technical experts from Rio’s leading universities–and his public affirmation that the residents of Vila Autódromo could stay.