On the afternoon of the 2014 World Cup final, as Rio’s Maracanã stadium filled with soccer fans, demonstrators congregated just 2km away in the Saens Peña square, in Tijuca, North Zone, regrouping after a peaceful morning march from the nearby Praça Afonso Pena. The demonstration brought together 500-1000 protesters, from favela residents and community groups to left-wing political party members and activists. Many sported Copa Pra Quem? (World Cup for Whom?) stickers, and people carried signs making a range of demands, from the end to the Military Police to a guarantee of the right to peaceful protest to comprehensive health and education reform.

While the Ministry of Sports’ official figure is $11.6 billion, recent estimates put the World Cup’s total cost closer to $15-20 billion, making it by far the most expensive World Cup to date. There is widespread discontent over the government’s allocation of funds, pouring money into stadiums and infrastructure projects–of which, 18% remain unfinished–while neglecting serious problems with sanitation, resource-starved hospitals, and floundering schools. In addition to these concerns, protesters voiced their opposition to forced evictions and the use of police violence, both against protesters and favela residents. One banner read “Free Those Arrested on Political Grounds, Dictatorship Never Again.”

On Saturday July 12, the day before the World Cup final and planned protest, police issued 60 warrants for temporary detention and made 21 arrests of activists on grounds of suspected vandalism and gang activity. The Brazilian Bar Association (OAB) asserts that the arrests were unconstitutional, interfering with the right to peaceful demonstration. Indeed, the risks of protesting have gotten too high for many. Recent protests have seen increasing police violence–including the use of live ammunition–as well as arrests made without reasonable cause. 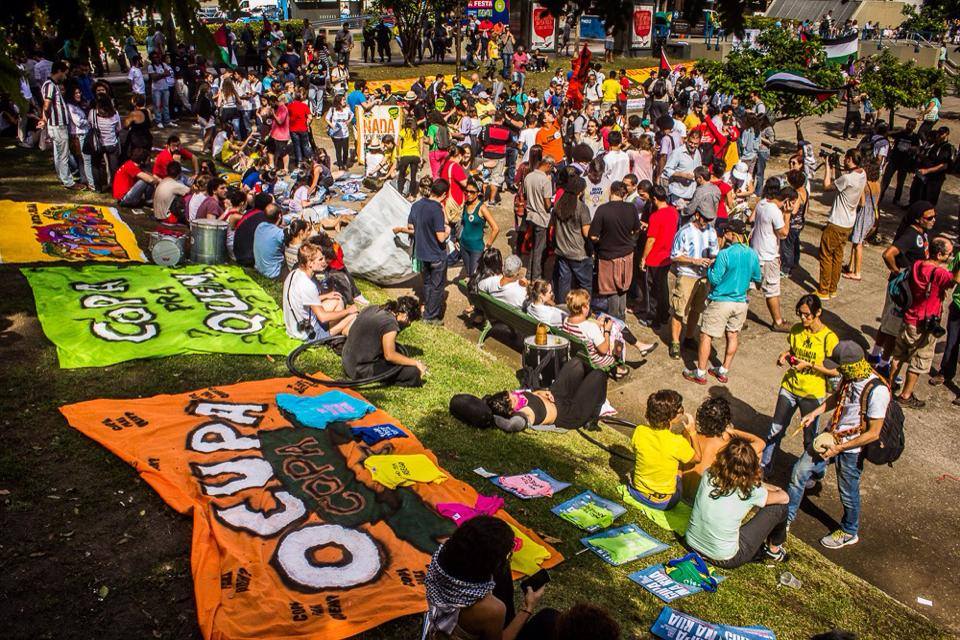 The Brazilian government spent US$1 billion on security for the World Cup. A total of 170,000 law enforcement, military, and private security personnel were deployed across Brazil during the tournament, backed up by an additional 10,000 members of the Shock riot police battalion. On the day of the World Cup final, there were 26,000 security personnel in Rio–a third of the Maracanã stadium’s total capacity.

Several hundred officers, most in full riot gear, were stationed all around the square. Apart from surrounding and searching a few protesters, they kept a distance, allowing demonstrators to circulate freely. However, large armored vans, rows of camouflage-print motorbikes, rows of police shields, and a mounted cavalry division blocked off different streets, with the greatest number of police stationed along the roads headed towards the Maracanã. 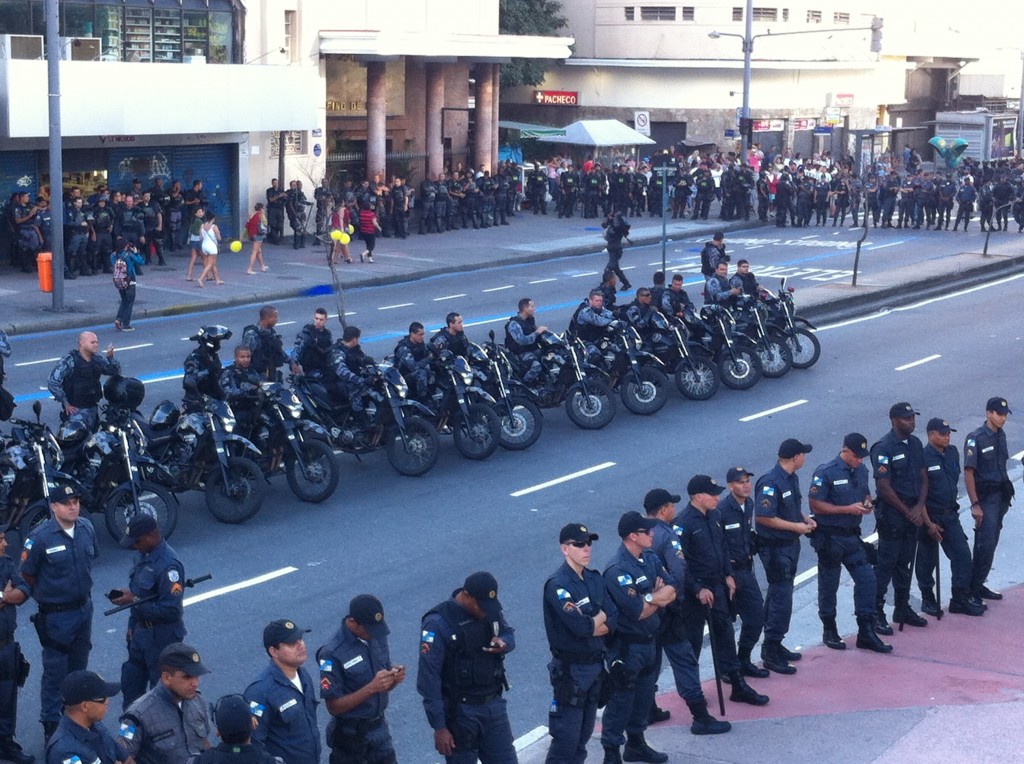 One protester held a sign shaped like a tombstone, with “RIP Human Rights” and an unsettling list of statistics: 5 people killed by Brazilian police per day, 250,000 people evicted from their homes for World Cup preparations, 10 worker deaths during stadium construction. A man wearing only a speedo and a garbage-bag cape carried a large cut-out of Brazil, filled in with the words “Dragged, Tricked, Repressed, Disappeared, Stolen, Killed” in red paint.

Residents from various favelas formed a loose semi-circle in one part of the square and took turns with a megaphone. They held a large banner with “The party in the stadiums is not worth the tears shed in the favelas” scrawled across, the same message of a June 23 protest along Copacabana beach. Residents focused on the effects of police violence, the Pacifying Police Units (UPPs) and the current army occupation in Maré. Representatives from Maré, Rocinha, Complexo do Alemão and more spoke over the crowd’s clapped funk beat, voicing their frustration with government policy that has used the World Cup to compromise and even negate their rights. Gizele Martins, a journalist and activist from Maré, spoke first:

“We have the right to housing, the right to a life. The World Cup destroyed and ended many lives with policies that target poor, black favela residents. Amarildo was just one case, but innumerable others are exterminated in the favelas. We are tired of tears of blood. We are tired of wiping up the bloodied ground.”

Amarildo de Souza, a bricklayer from Rocinha, was killed by UPP forces a year ago, on July 14, 2013. The case became an international scandal, and 12 officers underwent investigation for kidnapping, torture, murder, sequestration of the body, fraud, corruption, and false testimony. Last week, on July 7, a Military Police inquiry concluded that Major Edson dos Santos, ex-commander of Rocinha’s UPP, was not guilty, implicating three lower-ranking officers instead. Evidence of Major dos Santos’ role in Amarildo’s murder means that the decision will pass through internal investigation, however Rio’s long tradition of police impunity could once again block the course of justice. UPP officers have killed at least 30 people; the actual number is unknown, but likely higher. 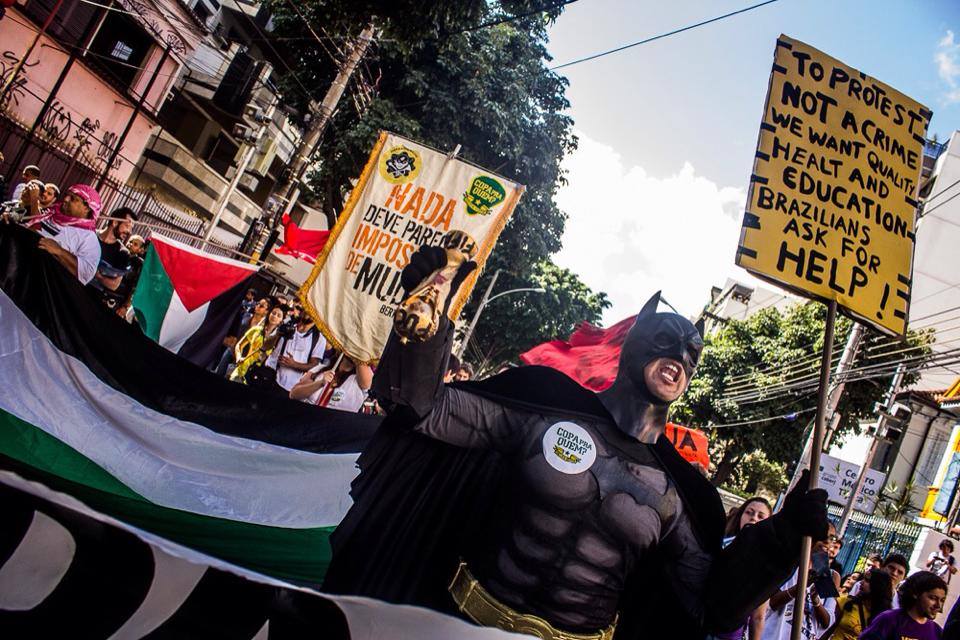 The megaphone continued to change hands, with several people leading the crowd in politically-charged funk songs. Lidi from the feminist funk group PaguFunk performed  a chant of MC Serginho’s ‘Era Só Mais Um Silva‘ (He Was Just Another Silva), making reference to the police killing of dancer DG Silva in Pavão-Pavãozinho this past April. A Rocinha resident sang about the World Cup legacy: “It’s the Cup of the business men, and the legacy of the Cup? Repression, privatization, it’s not for the favela residents.”

The testimonies were cut off as the protest started to move. Demonstrators began spilling into the street and starting off in the direction of the Maracanã stadium. Triple rows of riot police flanked the protest on either side with side streets barricaded by cavalry and military police. After walking two blocks, the protest hit a wall–armored vehicles and rows of police shields sealed off the road ahead. Protesters were forced to make a U-turn and head back towards Saens Peña.

Using the controversial kettling technique to physically constrain the limits of a demonstration, police then surrounded protestors on all four sides. Tension began to mount, and the protest split as a few demonstrators towards the back were abruptly surrounded by police and arrested. The protest continued the way it had come, but on reaching the Saens Peña square, things turned violent. A flash bomb went off near the front, sending a plume of blue-gray smoke into the air. As three more exploded, panic erupted. NPR nicely documented the shift in sound from upbeat samba, to chanting, to gunfire and the use of disproportionate and arbitrary force. 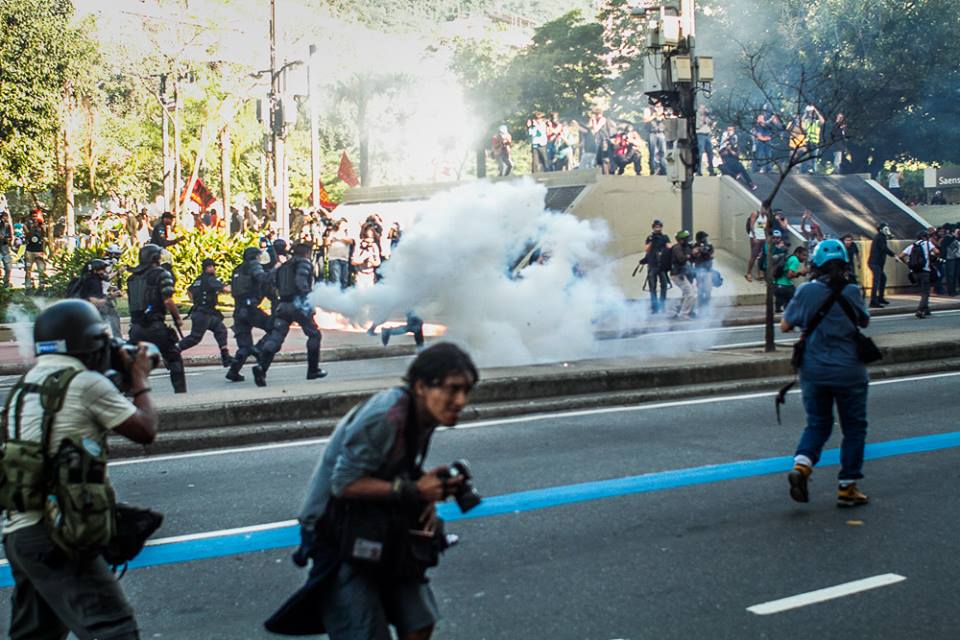 Security forces fired a combination of stun grenades, tear gas, pepper spray, and rubber bullets and blocked all escape routes from the Saens Peña square. People ran only to encounter additional tear gas bombs placed at intervals around the square, spewing blue and green smoke. Demonstrators rushed to the metro entrance in the square, trying to escape the gas, as police were closing the gate. According to protester Anna Baptista Marim, who posted a video of the scene in the metro, “[the police] assaulted a lot of people who were trying to get into the station before the gate was closed.”

Those who did not get to the metro in time were trapped in the square, with protesters as well as residents unable to get past police barricades, including a mother trying to get to her daughter’s birthday and a pregnant woman. The remaining demonstrators faced another round of tear gas and smoke bombs as well as reported beatings with police batons. While protesters were outnumbered by security forces by at least 2:1 at the beginning of the protest, by the end, the ratio was closer to 5:1. By 4:25pm the police declared the protest over.

According to the Rio Journalists’ Union, fifteen reporters were injured, including three foreigners. At least two were injured by grenade shards, and a girl was hospitalized after being tear gassed. The potency and color of the tear gas used have led some to speculate as to whether such aggressive weaponry is at all safe or recommended for use in civilian contexts. 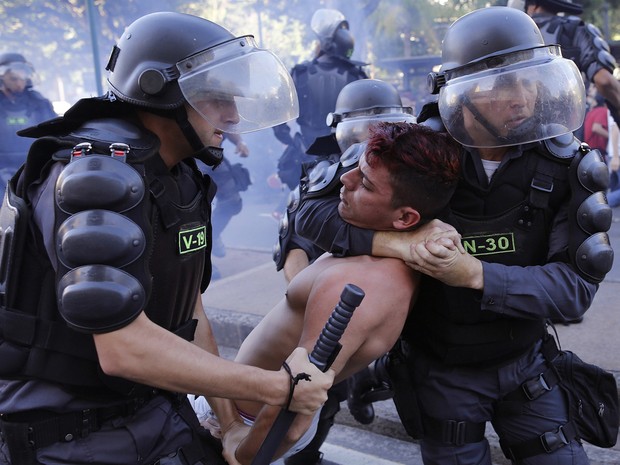 While protests in June 2013 rocked the country, as millions of Brazilians took to the streets, recent protests have been tiny in comparison. FIFA President Sepp Blatter recently asked the rhetorical question, “Where is all this social unrest?” during a July 3 speech. The police’s punitive, undemocratic response to peaceful protest with disproportionate use of force, coupled with a heavy-handed media criminalization of protesters over the last year, have been successful in deterring the majority of those who protested last year. Yet the demonstrations have continued, met with increasing police brutality.

In response to the weekend’s arrests and police violence–which have caused widespread outrage and furious commentary on social networks–Amnesty International Brazil has called for an investigation into the police abuses. Director of Amnesty International Brazil, Atila Roque, said: “The arrests on Saturday and the way the police behaved on Sunday, violently repressing a small protest near Maracanã stadium, were a clear attempt to intimidate protesters.The violence meted out by the security forces over the course of the World Cup was excessive, unnecessary and a direct threat to the right to peaceful protest.”