On Sunday April 10, residents of Horto, located within and around Rio de Janeiro’s Botanical Garden in the South Zone, held a protest against the removal of their community of 621 families.

The protest, announced as “An Act of Defense of the Horto Community” started inside the gates of Horto, where around 80-100 residents and supporters of all ages gathered wearing “Horto Remains” t-shirts and sharing “Horto: history that matters” stickers.

At 10am the community made their way down Rua Pacheco Leão to Rua Jardim Botânico where they marched alongside the fences that enclose the Botanical Garden, stopping to chant at one of the Globo Network buildings. As happened during the last march, on Sunday March 27, the Botanical Garden gates had been blocked to prevent the group from entering.

Outside the entrance gates of the Garden, the community affirmed over a mega-phone that they will continue to protest every Sunday until their voices are heard. Until now Botanical Garden representatives have not made direct contact with the community about the reasons for eviction. President of the Horto Residents Commission, Emilia Maria de Souza confirmed they refuse to discuss the matters with community. 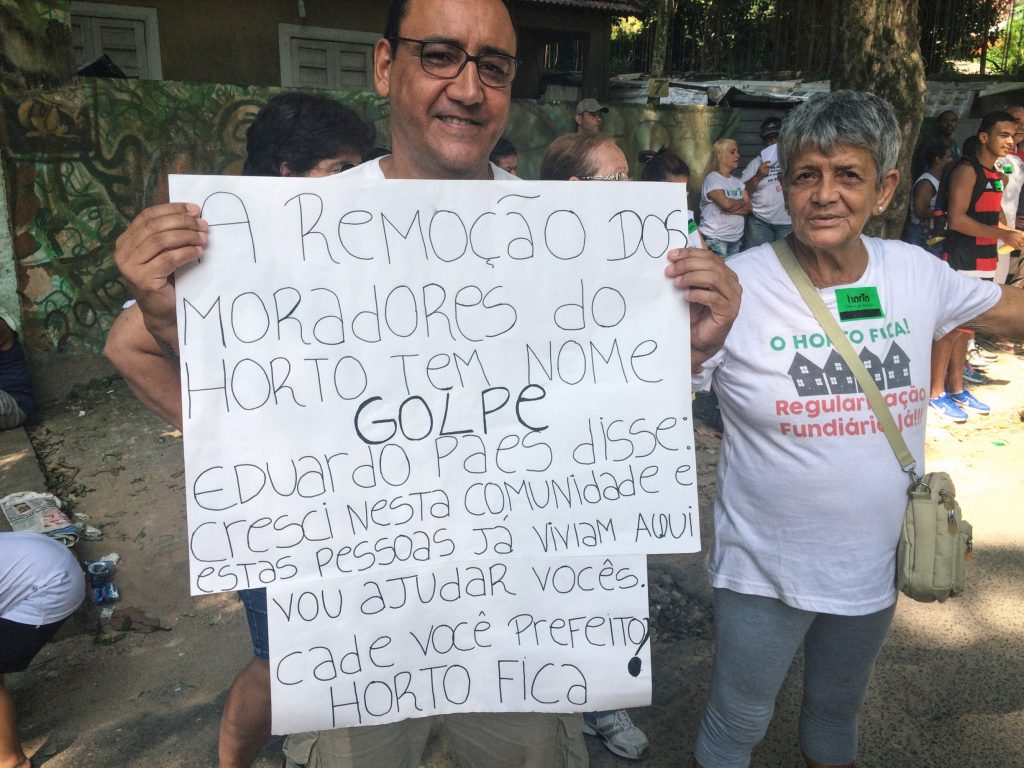 One resident held a sign saying: “The removal of Horto residents has a name: COUP. [Mayor] Eduardo Paes said: ‘I grew up in this community and these people already lived here. I am going to help them.’ Where are you Eduardo Paes?” The resident explained that Paes was born just over the road and he has been filmed pledging his support for the community.

The community of Horto has a long history, dating back to the 15th century when the land was occupied by sugarcane plantations. In 1808, King João VI expropriated the land, first for a gunpowder factory and then for the gardens. As the workers of the Botanical Garden were spread across Rio de Janeiro State, they were invited by the King to relocate and permitted to build homes within the park’s boundaries.

Resident Vilmar da Silva Paulo, who has lived in Horto for over 50 years, affirmed: “The majority of people who live here are descendants of people who had lived here for 70-80 years.” Vilmar received an eviction notice from Botanical Garden representatives on January 18, 2016, stating that he would be evicted in 10 days. This eviction did not take place. On March 28 Vilmar and his family faced another eviction threat and spent several days receiving news that the Shock Troops were to arrive and remove him from his home. Vilmar’s son, Adilio da Silva Paulo, said he’s doesn’t know why his family’s home was targeted first.

All information regarding the eviction notice was conveyed through Shock Troops and the media. There has been no official communication. Residents have received no offers of compensation.

Vilmar believes the eviction threats and misinformation were intended to increase psychological pressure on residents to leave, as has happened in favelas across the city. However he is standing firm and remaining in his home where he lives with his four children and four grandchildren. He strongly affirms: “We are a family here… all the residents of Horto are a family.”

According to Celia Ravera, lawyer and professor of Architecture and Urbanism at Rio de Janeiro’s Federal University (UFRJ), the Botanical Garden is claiming to need Horto’s land in order to conduct a research study, but there are many other areas that the Garden already has access to that would be more than sufficient.

Recent speculation for the use of the land is to transform it into a commercial area for surrounding businesses, Globo being one of the dominant tenants of the area. Many residents voiced that it was only after Globo moved some of its headquarters to the surrounding Jardim Botânico neighborhood that Horto started to experience the threat of eviction.

At least 20 residents currently work in the Botanical Garden. None of them participated in Sunday’s demonstration for fear of jeopardizing their employment.