On Friday August 5, millions of people around the world watched as passinho dancers took to the stage at the Olympic Opening Ceremony. This moment, emblematically put to the favela anthem “Rap da Felicidade,” signified for many a much-awaited affirmation that passinho has a permanent place in Brazil’s cultural identity. Passinho has come a long way to get to this point, from near obscurity to stigmatization to international fame, in an amount of time that rivals the iconically speedy footwork itself.

While passinho has been around in the baile funk (funk party) dance scene since at least the early 2000s, it remained relatively unknown for several years. The first dance group to include passinho was the Imperadores da Dança, founded in 2006 by Anderson Santana (known as Bainaninho) in Jacarezinho in Rio’s North Zone. During that time, dancers learned by word of mouth about one another and baile funks became locales for inter-favela dance duels. While baile funk parties are thought of as the birthplace of passinho, many battles actually occurred on a small side road by the Madureira Shopping Mall. This historical spot was where many dancers gained their reputations, battling in one of the many informal rodas (circles) formed every Saturday, a tradition that continues to today.

In 2008, at a moment that is often regarded the Internet inception of passinho, a dancer called Beiçola from Jacarezinho posted a YouTube video of him and his friends dancing. The video spread rapidly, inspiring favela youth across the city to use social media to share similar dance videos, and passinho was transformed almost overnight from an insulated dance to a full on cultural phenomenon.

In 2011, writer Julio Ludemir and musician Rafael Mike Soares organized the first Batalha do Passinho (Passinho Battle), at the SESC cultural center in Tijuca. These battles legitimized passinho as a dance style and inspired filmmaker Emílio Domingos to make the 2012 documentary A Batalha do Passinho in which he follows the lives of pioneer dancers such as Cebolinha and Gambá. Tragically, Gambá, the “King of Passinho,” was murdered in 2012 at the height of his dance career. He never got to witness the release of the film or the impact it had. His death, the details of which remain a mystery, hit the dance community hard. Those who knew him resolved to keep dancing in his honor. Gambá lives on in passinho’s history, immortalized through the choreography he contributed to the dance movement.

Passinho first gained international exposure when Ludemir took a group of dancers from the passinho battles to perform at the closing ceremony of the London 2012 Paralympic Games. Soon US pop icons were picking up on the phenomenon: Chris Brown danced Passinho do Romano; Beyoncé included passinho moves in her 2013 Rock in Rio performance; and Ricky Martin featured the Dream Team do Passinho in his 2014 music video “Vida.” During the 2014 World Cup, passinho was featured in the BBC‘s official video montage and the New York Times called funk the “soundtrack of Rio.”

Passinho, which literally translates as “little step,” is characterized by patterns of rapid foot movements that are facilitated by sharp twists from the waist. Passinho mixes elements from breakdancing and funk with traditional Brazilian moves like samba, frevo and capoeira. It is traditionally performed unchoreographed, with dancers improvising on the spot to the music. 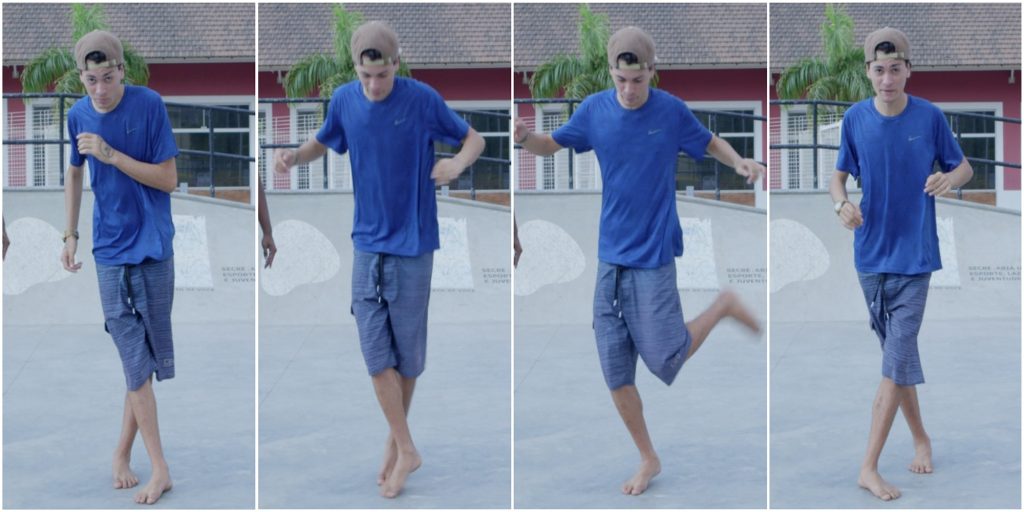 A signature stylistic aspect of passinho is the dancer’s gaze towards their feet. Often mistaken for looking at the ground–a no-no within the world of classical dance training–this aspect is not a sign of amateurism but a stylistic choice. Dancers say they are following the motion of their bodies, and motion in passinho is in the feet.

While there are basic passinho moves, there is no rubric that demarcates what is “correct” or “incorrect.” This gives dancers the freedom to interpret moves differently and personal modifications can become unique styles, such as the famous Passinho do Romano in São Paulo. The goal of passinho is not to imitate, but to reinvent. This playful competition is the creative force that drives passinho’s continuous evolution.

Because passinho is typically danced to funk carioca, the dance movement has received a lot of the stigma associated with the musical style. Funk carioca, a fusion of American funk beats and Afro-Brazilian rhythms that originated in the 70s and 80s, has faced criminalization and criticism for lyrics that push the limits of social acceptability in terms of violence, drugs, and sexual references. Many artists will say that they are speaking from their reality and point to other musical genres that also include taboo themes, but never seem to face the same magnitude of backlash. For many, the criminalization of funk, and by extension the criminalization of passinho, is an expression of the criminalization of poverty.

Passinho has also been affected by the criminalization of baile funk parties, a key dance space for passinho. In 2000, Rio de Janeiro state passed law 3410 restricting the organization of baile funks by requiring, among many things, that organizers install metal detectors and only host bailes with the presence of the Military Police. In 2009, the baile funk movement gained a victory with the passage of state law 5543, which officially recognizes funk as a cultural movement and prohibits discrimination against funk.

Passinho is often credited for helping to diffuse tensions between favelas as dancers were allowed the exceptional ability to bypass borders that separated territories run by rival drug gangs. Passinho gives dancers an affirmation of the value they have as individuals. 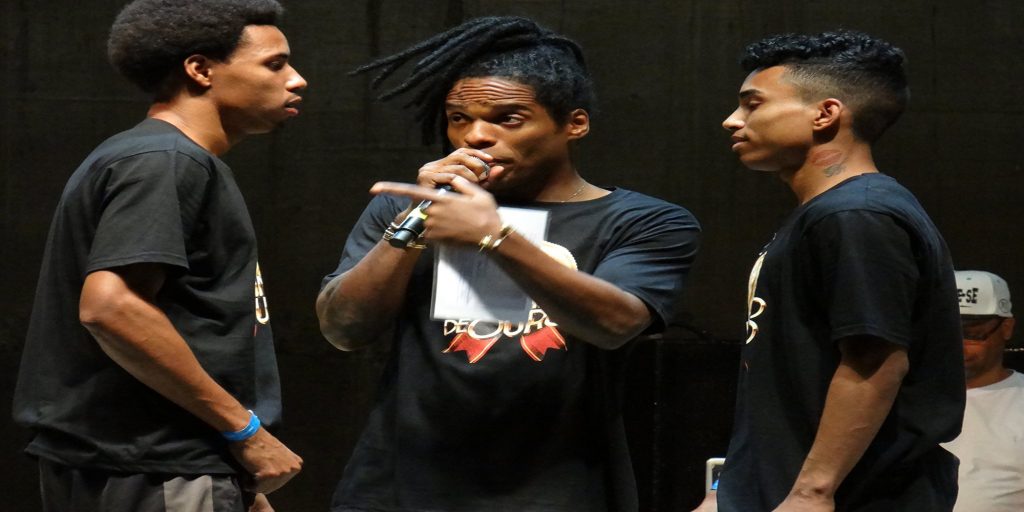 Passinho offers young black men, the demographic most likely to fall victim to police violence and coercion into drug trafficking, a refuge from violence and alternative means of gaining status and earning money. Passinho is inherently political in its assertion of pride for black culture and favela culture within a country that historically stigmatizes both.

Inherent to the passinho movement is a sense of community and belonging. Many dancers refer to their peers as “family” and veteran dancers feel a sense of responsibility to guide the next generation, not only in dance movements but in life choices.

Passinho has also helped break down gendered roles within the dance community. Passinho created a space for men to show off dance skills, challenging the preconceived notion that only woman can dance in exhibitionistic ways. The dance’s tendency for playful gender-bending choreography also allows men to defy the expectation of showcasing hyper-masculinity.

This deconstruction of gender norms indirectly opened the possibility for female artists to enter the scene and use funk and passinho as a means of empowerment. Initially, when female dancers entered the passinho scene, they faced discrimination and exclusion. While girls have been involved in passinho battles since 2012, there was an unspoken rule that a man could not lose to a woman.

In 2015 girls were finally given their own category in the CDA Batalho do Passinho, a victory for those who’ve waited for recognition in the male dominated passinho dance field.

Educators are now recognizing the corporal and socio-cultural potential of passinho, and the dance style is being introduced as an instructional tool in some Rio schools. Members of the Dream Team do Passinho act as cultural ambassadors, using their fame to spread messages about topics such as reproductive health and rights.

Today passinho has grown from one small dance group in Jacaré to active groups based all over Rio. Passinho dance battles are highly organized and have corporate sponsorship. Contestants are either chosen or nominated democratically by their peers through “likes” on dance videos. Dancers are then paired off and each has 40 seconds to perform for the panel of three judges. The judges, experts in passinho, decide who shall proceed to the next round taking into consideration both range of skill and basic technique. Judges also look to see that the dancer presents their own unique style and personality. The winners receive a cash prize in addition to the acclaim and recognition of winning the battle.

Dancers are currently preparing to compete in the Passinho de Ouro finals this Saturday August 20, a challenge put together by Rio 2016 organizers. Meanwhile, passinho continues to gain recognition in pop culture–dancers from Imperadores da Dança will make an appearance in the upcoming comedy film Tô Ryca to be released on September 22.

But while passinho is gaining exposure on the stage and in cinema, artists are still fighting for recognition in the formalized art world and for the facilities to train. Many performance dance groups, such as Imperadores da Dança, still do not have a studio space of their own to train in.

Additionally, as passinho and funk become more popularized, these cultural forms face appropriation by industries hoping to profit by selling the funk “brand.” Nightclubs in the affluent South Zone and even clubs within pacified favelas host high-priced funk or passinho themed parties which attract wealthy Brazilians and tourists. This exclusivity is counter to the inclusive nature of passinho, and is especially problematic to those who believe the key difference between valorization and appropriation is the presence of representatives from the original passinho dance community. Dancers hope that instead, international attention will bring greater respect for passinho as a legitimate dance style and generate more opportunities for favela artists.

Passinho’s history is far from complete, in fact many dancers say the movement is only growing. As such, passinho is a history in motion, a legacy forged step by step.

Check out our video of  William Severo dos Santos preparing for his Olympics debut: