The world was shocked earlier this year when a video went viral of Dandara dos Santos, a trans woman from the state of Ceará in the Northeast of Brazil, being tortured and eventually killed in the state’s capital of Fortaleza. Many international news sources picked up the story, appalled at the sheer disregard for life displayed in the horrific video. To many Brazilians, however, the video was not surprising. For many years, Brazil has held the world record for hate-based LGBT murders with 331 recorded in 2016 resulting in the statistic of an LGBT person being killed roughly every 25 hours.

On the other hand, Brazil is also a beacon and model for the world in its fight for LGBT rights. The annual Pride Parade in São Paulo grows every year keeping hold to its first place ranking based on number of attendants; this year organizers boasted crossing the 3 million mark. Rio’s annual Carnival celebration is often openly queer and attracts LGBT tourists from around the world. Furthermore, the Brazilian government was one of the first countries to work with LGBT rights organizations to offer free medical care to people living with HIV/AIDS, gaining the country international acclaim and decreasing the number of people living with HIV/AIDS to below the level of the United States. It is also a leader in manufacturing cheap antiretroviral drugs, also resulting in a higher level of people taking these medications as compared to the United States.

At the federal level, in 2004, same-sex unions were legalized which eventually led to full marriage equality in 2013. In 2010 and 2011 the Supreme Court expanded rights for same-sex couples including adoption and expanded legal rights. The country has also been very active in the fight for equal rights in international bodies such as the UN. In Rio de Janeiro, the city and state government cooperated to create “Rio Without Homophobia,” a public campaign to fight homophobia in the city. It was massively popular, however, it was almost completely defunded by the City official who put in charge of the program, among others, in the previous government.

Unfortunately, the LGBT community has recently come under attack again which is leading to an ever-growing state of fear; this is exacerbated by the politicians who have recently taken power on the national and local level. New president, Michel Temer collapsed the Human Rights Secretary position, previously in charge of nationwide LGBT rights initiatives, under an already existing national secretariat. Recently-elected Rio mayor Marcelo Crivella has also targeted the community by threatening to defund the annual Pride Parade and appointing a religiously conservative party member to be the Special Secretary of Sexual Diversity. While the secretary is openly gay, he belongs to one of the most conservative and anti-LGBT parties in the country. The city, state, and country are all in a financial crisis, as well, which puts LGBT people who are already among the most vulnerable in society, at even greater risk. It is also important to note that while there haven’t been many concentrated attacks against LGBT individuals on the governmental stage, the conservative, and in Rio’s case, openly Christian political parties in charge easily support and advance homophobic and sexist ideologies across the country.

All of these political changes also share center stage with a growing crisis of racist, sexist, and homophobic violence taking place in the country. In July of last year, the body of Diego Vieira Machado was found on the nationally esteemed campus of the Federal University of Rio de Janeiro (UFRJ). He was an openly gay, black student from Pará studying languages, and his death shook the city. If LGBT and black individuals weren’t safe on a federal university campus, where would they be? The Rio de Janeiro metropolitan area, including its major suburban cities, experienced 64 hate-based LGBT murders between 2012 and 2016. The city had the third highest number of murders over that five-year period (after São Paulo and Manaus) and the state of Rio fell in third in 2016 behind São Paulo and Bahia respectively.

When comparing Rio to other major metro areas, interesting data are revealed. Although Rio experienced the third most cases of LGBT murders, its deaths per million number is in seventh place among the other major metro areas in the country. It is almost tripled by cities like Salvador and Recife, and Manaus has a murder rate six times that of Rio. It is important to note that cities like Manaus, Salvador, Recife, and many other North and Northeast state capitals have high murder rates in general. One thing is clear, though, for LGBT individuals, Rio is relatively safe compared to other large cities in Brazil. Select smaller cities throughout Brazil also boast much higher murder rates as well.

Let’s break this down even further. Rio de Janeiro is a metro area with various regions and suburbs. When considering just Rio de Janeiro proper, the murders go down to 31 in the five-year period: 12 in the West Zone, 6 each in the North and South Zone, and 7 not reported. This means that over half of the LGBT murders in the Rio metro area took place outside of the city of Rio de Janeiro.

When investigating more specifically, the municipality of Rio de Janeiro’s murder rate is on the low end while certain suburban areas’ rates are quite high. Nova Iguaçu for example, has a higher LGBT murder rate than all of the ten major metro areas of the country except for Manaus. The charts below give a year by year representation of the number of LGBT murders in the major metro areas and the Rio metro area respectively. 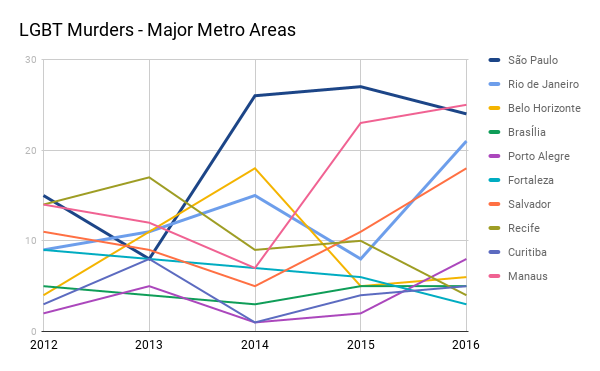 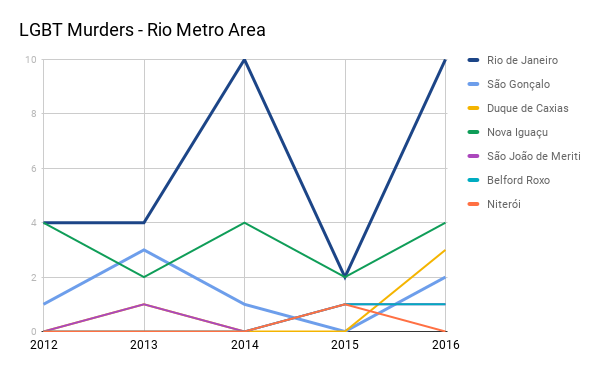 Rio is similar to the rest of Brazil when you look at the identities of the individuals murdered. A majority (42) were gay men as well as one bisexual man. The rest (21) were trans people or transvestites, most of whom were transitioning from male to female. Rio de Janeiro is not alone. Over a seven-year period ending in 2015, Brazil experienced 802 trans murders, more than tripling Mexico in second with 229. The trans community is thriving in many parts of the country, yet stories like Dandara dos Santos’ continue to make their way to the headlines creating a deadly dichotomy.

It is important to note that the trans community in Brazil has vastly different origins than that of many other countries. Travestis, literally translated to transvestites, whom never fully transition yet often have surgical procedures and live as women, existed long before the notion of trans and drag queens made their way to Brazil. In fact, the famous drag queens of Carnival were originally, and still are, largely travestis. After the government included gender transition surgery under covered procedures, transitioning has become more popular and accessible, however it is very important to note that Brazil in general is more queer than most of the U.S. and Europe, and many people do not prescribe to the categories Westerners are often used to.

However progressive culturally, Brazil has yet to catch up in actual lived freedoms for trans individuals. Brazil is highly religious, representing 11.7% of the world’s Catholic population. Evangelicals are also on the rise, specifically ultra conservative Pentecostal churches: growing from 26 million Brazilians in 2000 to 42 million in 2010. This all has contributed to a general lack of understanding about the LGBT community and in some cases increased attacks physically and legislatively. In effect, many trans people are prematurely kicked out of their family home resulting in inadequate education and health standards for this community; up to 90% of trans people turn to prostitution for survival. While the trans community is celebrated and praised, especially around Carnival, the community is often quickly forgotten and relegated to the shadows of society in many areas across the country.

Notably absent from the murder statistics are lesbians and trans men; over 5 years Rio de Janeiro had zero reported cases of lesbian murders. However, this statistic could be vastly inaccurate and is hiding a much deeper and deceiving truth. Machismo culture in Brazil, like much of Latin America, is extremely strong: a woman is assaulted every 15 seconds and murdered every 2 hours in the country. Women, especially lesbian women, have reported increased “corrective rapes” where men rape a women to “correct” her behavior. This may be done to lesbian women in an attempt to “correct” her sexual behavior. This issue exploded in Rio last May when a 16-year-old girl was mass raped while being recorded. In 2015 alone, the state of Rio de Janeiro had 5,676 reported rapes. While this statistic is staggering, approximately 90% of rapes go unreported. Lesbians, trans men and women, and queer women are highly affected by this statistic.

As of writing this article, 200 LGBT individuals have been murdered in Brazil in 2017; 16 in the State of Rio de Janeiro which is in fourth place behind São Paulo, Bahia, and Minas Gerais. There have been 96 trans murders, 67 of which were travestis. The Rio metropolitan area has seen 9 murders: 3 in Nova Iguaçu, and one each in Belford Roxo and São Gonçalo. While it can’t be deduced that public policies have directly impacted the rate of violence against LGBT Brazilians, it is still important to understand the feeling of living day-to-day in their shoes. Programs like Rio Without Homophobia and federal government mandates protecting LGBT rights had a vital impact in lifting the LGBT community to a greater place of power. These initiatives must be continued and bolstered if the nation wishes to shed its infamous title of World LGBT Murder Capital. With the current state of the economy and politics in Brazil, however, this seems unlikely. Only when the lives of LGBT activists and citizens are valued, fought for, and protected will the statistics and pressure ease.