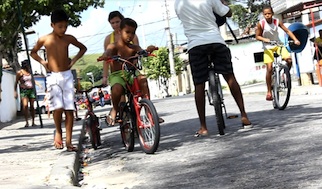 The neighborhood of Santa Margarida, in the West Zone of Rio, is home to 5,000, many of whom depend on bicycles for local transit and who pitch in to clean up the neighborhood. The Vice President of the Resident’s Association of Santa Margarida explains that: “You evolve as a human being, by passing on your knowledge and learning from others on a daily basis.”

The association strives to have the wisdom and the foresight to create improvements for the community’s residents. One of their projects involves local residents helping with the trash pick-up in the neighborhood. It’s the ideal job for Seu Tijuga, 71, who can choose his own hours and help improve the community while at the same time making himself feel useful and healthy. “I have diabetes, and diabetics aren’t supposed to stay still, they have to move. So, I know that when I’m moving I am doing well…I take care of myself, I take the right medicine and the rest of the time I just live my life,” he says with a big smile. 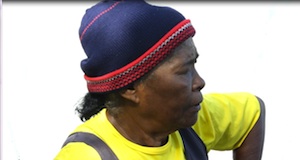 Another worker, Dona Carminha, does not read or write and is one of the main supporters of her family at 78 years old. She is proud of her work and the fact that, in six years, she has never taken a sick day, or a day of leave. Dona Carminha even broke her arm and said, “I went to work the next day…I needed to. I have a widowed daughter, three boys, one who has special needs, and now I have diabetes.” The project employs people who may not have other chances to work due to prior circumstances and lack of opportunity. They are residents with dignity and perseverance whose work helps the community become a cleaner and more beautiful place.

Despite the wonderful work being done there are still many resources needed within the complex, such as a bank and a nursery center. The majority of the residents work far away from their homes in Santa Margarida in more developed parts of the city such as Barra, the city center, and Ilha do Governador, and deal with Rio’s infamous traffic every day to go back and forth. With the West Zone quickly becoming one of the city’s largest working class areas due to its overall affordability, neighborhoods such as this are on the rise.

Santa Margarida is one of eight communities to be featured in Catalytic Communities’ film, “Favelas as a Sustainable Model,” to be launched during the Rio+20’s People’s Summit in June.