This is the third article in a five-part series on community museums and resistance in Rio’s favelas in honor of Brazil’s 16th Annual Museum Week (May 16-20, 2018).

The Maré favela complex is made up of 16 favela communities situated in the North Zone of Rio de Janeiro. Home to over 130,000 residents according to the 2010 census (although recent estimates calculate approximately 140,000 residents), Maré is the largest favela complex in Rio. Before the first settlers arrived on what is now known as Morro do Timbau, this part of Guanabara Bay was made up of an archipelago of nine islands where small indigenous fishing communities resided for over 8,000 years.

Since the late 19th century, however, Maré has been the ground upon which “various governments performed their experiments,” according to museologist Mario Chagas. One major intervention came as part of the urban reforms during Mayor Pereira Passos’ government (1902-1906) in which Rio de Janeiro was to be transformed into a ‘tropical Paris.’ Many people were removed from the poorer areas of the South Zone and central area of the city and settled in the Maré region. A surge of industrial development in Rio in the 1940s and 1950s meant that Maré’s surrounding areas became real estate targets, and the poor were left to occupy the swampland by Guanabara Bay. These industrial projects attracted migrants from the Northeast and Central-West regions of Brazil who also settled in Maré. One such project was the construction of Rio’s principal highway: Avenida Brasil. During this time, Morro do Timbau was not only the only mainland area in Maré but was also surrounded by water and swampland. As migration increased, families built their houses on stilts in the water. 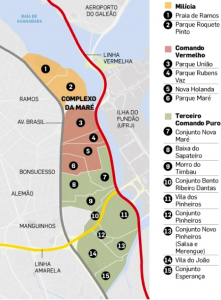 These stilt houses were inevitably tied up with the stigma attached to favelas and became a “symbol of national poverty,” Chagas writes. The military dictatorship under João Baptista Figueiredo devised Projeto Rio (Project Rio), a large land reclamation project that removed the residents living on stilt houses, filled the area with earth, and built prefabricated houses on this land. The communities Vila do João, Vila do Pinheiro, Conjunto Pinheiro, and Conjunto Esperança were formed in this way. Further evictions from the South Zone of Rio in the 1950s and 1960s under Governor Carlos Lacerda meant that entire favela communities were removed and many residents relocated to Maré. Nova Holanda, for example, is a favela that began as a provisional housing project built to rehouse evicted residents from favelas such as Praia do Pinto, Favela do Esqueleto, Morro da Formiga, and Morro do Querosene.

Maré means ‘tide’ in Portuguese, which reflects the unique history of a community developing literally out of the water through both formal and informal actions. In 1994, Maré was officially recognized as a neighborhood. Today, Maré has been through processes of military occupation and police invasions and the introduction of drug trafficking in the 1990s divided the favela complex into areas controlled by rival drug factions, complicating circulation around the community. Despite this, the favela complex is united by its rich and varied culture, historic diversity, and voice of resistance, all of which its community museum conscientiously exhibits.

Countering narratives at the Maré Museum

The Maré Museum was established in 2006. It is affiliated with the NGO CEASM (Maré Center for Solidarity Studies and Actions), which works to help prepare students from the community to pass university entrance exams. One of the museum’s primary aims, therefore, is to preserve memories and the history of Maré in order to provide young people with a sense of pride and value for where they live when they go to university. Maré Museum Director Cláudia Rose Ribeiro da Silva explained:

“We wanted our kids to understand that memories could be used as tools for them to identify with their home and their community. When they went to university we wanted them to feel proud about where they came from. They don’t need to feel like they don’t belong at university or feel grateful for being there. They have the right to be there.”

The Maré Museum collects two types of information: information on how Maré used to be and the changes that have occurred in the community until the present day, and personal stories from residents. The museum leaders collect newspaper clippings of Maré’s appearances in the major newspapers O Globo and Extra (the oldest one dates back to 1936), as well as photos, objects, videos, and oral histories from residents and relevant documents from the National Archives. Academic material and an archive of the community newspaper Jornal O Cidadão are also stored.

The museum does not, however, record or collect information about violence and drug trafficking beyond clippings from the national media. The museum’s archivist Marli explained that, aside from the danger that keeping such records would pose, “these are memories that are not in danger of being forgotten.” This is not to say that the issue of violence is avoided, but it is dealt with in the exhibition rather than the archive.

The more public face of the Maré Museum’s counternarrative is presented in its permanent exhibition, where key negative media representations of the community are tackled in sections such as ‘Tempo da casa’ (Phase of the home) and ‘Tempo do medo’ (Phase of fear).

The centerpoint of the museum exhibition is a replica of one of the stilt houses removed as part of Project Rio. Restoring this symbolic image of the community is in itself an act of defiance. The bright blue color of the house represents and celebrates the structure, and objects donated by residents from their own homes are arranged inside, filling the house with personal memories. The description of the ‘Tempo da casa’ section begins with “the phase of the home, of comfort, and of safety,” transforming the house from the ‘symbol of national poverty’ to a space of protection. In this way, the house that was once presented as an image of squalor is exhibited with pride as a key part of the community’s history. 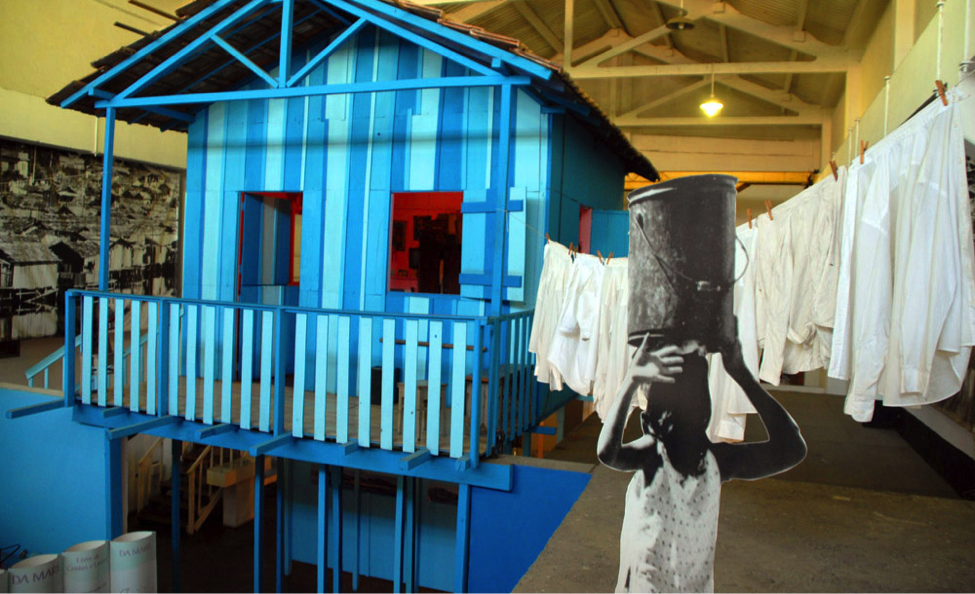 The exhibition does not look upon Maré’s history simply with rose-tinted glasses, however. The description for the ‘Tempo da casa’ section ends with “The phase of the home, of comfort… and what about safety?” Military occupations, police invasions, and drug wars have created a climate of instability in the community. The ‘Tempo do medo’ section not only addresses this but also the media’s hyperbolic representations of Maré as a war zone and its inhabitants as perpetrators of violence. A quick search for “Complexo da Maré” on the website of Brazil’s largest media organ, Globo, for example, will yield stories exclusively of violence and drug-related raids on the first page.

The museum reframes the presence of violence in the community. Silva explained that “many people wanted this phase to be called the ‘phase of violence.’ But there is violence outside the favela too. Here, we have a bigger problem with fear.” Thus the museum challenges the dominant representations of favela residents and the myths of marginality by demonstrating that favela residents, like residents of the asfalto (formal city), are victims of violence too. Silva reflected:

The display is incredibly powerful. It features a glass case containing bullets and their shells, which were collected from the streets in the community, behind which is a wall made up of over a hundred plaster casts of bullet holes from around the favela. The museum scenographer Marcelo Vieira worked with high school students to collect these bullets and make the casts. By requiring these students to pay close attention to the structure and texture of the walls and the shape and depth of the bullet hole, and by developing an artistic technique that could be applied to other objects, the aim of this project was to provoke a change in the way participants perceived their surroundings by making the familiar unfamiliar. By bringing the reality of the favela to the museum, the museum also succeeds in placing the visitor in the shoes of a resident, helping them understand the climate of fear from the community’s perspective, to show that the favela resident is also ‘fearing’ rather than the creator of fear. 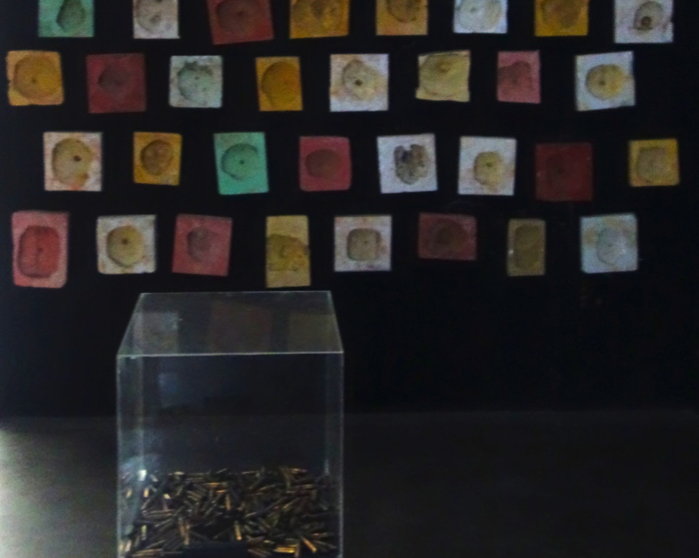 The museum is used as a tool to directly invert power dynamics by addressing the absence of the community in national records, reframing public perceptions, and actively shaping the process of historical production to produce the community’s own narrative. Whereas the Maré Museum places a strong emphasis on documentation, the next case study—to be published tomorrow—will show how Horto‘s archive is used as a tool for contestation.

This is the third article in a five-part series on community museums and resistance in Rio’s favelas in honor of Brazil’s 16th Annual Museum Week (May 16-20, 2018).

Gitanjali Patel is a researcher and translator. She has an MA in Social Anthropology from SOAS, University of London. Her research looks at memory and the production of history in Rio’s favela communities.