The speakers highlighted the lack of black women in the creation of new technologies as an increasingly urgent problem given that the technologies that will define life in the future are being developed today. Without all of society represented in that process, those technologies will only “reproduce the status quo” in terms of social structures, Silvana Bahia warned. Brazil lacks statistics on race representation in STEM fields. However, from a dozen or more stories told by participants throughout the night with a common theme about being the only black woman or even black student in a college major, it remains clear that black people and especially black women continue to be isolated within university classrooms and scientific workplaces in Brazil. 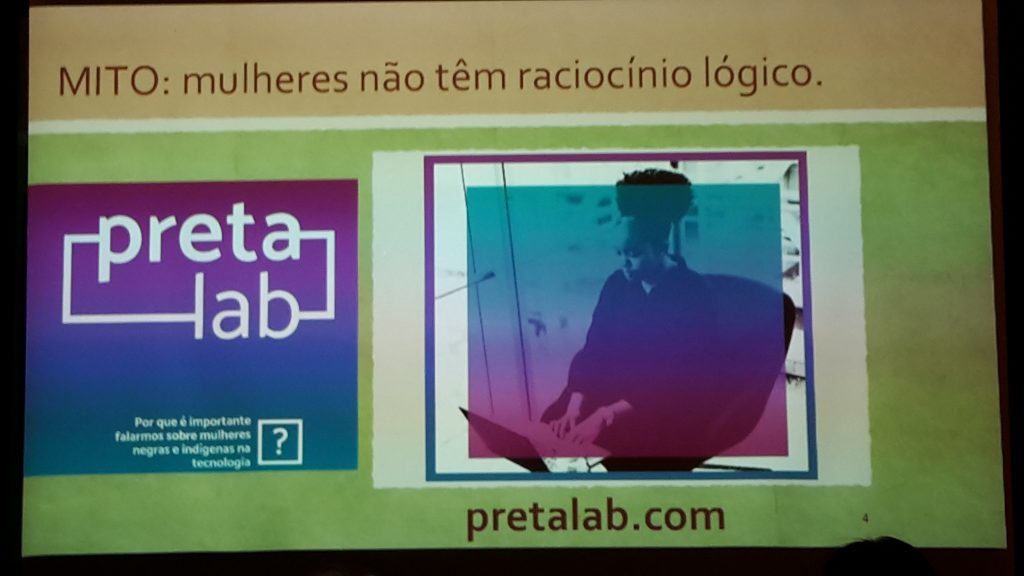 With the idea that “technology is more about people than the machines,” as Bahia said, the Olabi coworking space and its data-gathering project PretaLab seek to “encourage new protagonists” in the field. One such example of “what is possible with black women with technology in their hands,” in the words of Bahia, is Safira Moreira, a young, black filmmaker who showed her acclaimed short film, Travessia (Crossing), documenting her genealogy as far back as she could trace, to her great-grandmother, as a form of resistance to “the erasing of the black population.”

Dr. Werneck, born and raised in Morro dos Cabritos in Rio’s South Zone, emphasized the importance of recognizing that “we were never the first and we were never alone” in breaking barriers. Recounting her story as the only black medical student during her studies in the 1980s, she praised the generations of black mothers who told their children to get an education and labored day in and day out to make that dream possible. She said she was constantly reminded of and motivated by the generational investment in her journey to graduate college by an elderly black woman who lived a few houses up the street and greeted her with “good morning, doctor” and “good evening, doctor” every day on her commute.

That investment continues today as it begins to bear more and more fruit. Gabriele Roza spoke of her hope for the future: “Having all of this [technology] in our hands, we can hand over to those three, four, or five-year-old girls a future… that we’re helping to construct too.” Roza, herself a current communications student, observed, “We already have the first [black] woman professor, the first black woman in technology,” but “that girl who’s growing up now… will already be able to enter into those spaces” like any other spaces. She marveled, “If I, here, have already accomplished so many things because of this past… imagine those girls.”

Yet, the road to that world, like the paths tread by the trailblazing women who came beforehand, will not be easy. “They always tried to prove that I shouldn’t be in that position,” explained Dr. Guimarães. A female doctor in condensed matter physics and the first female professor at the renowned Technical Institute of Aeronautics (ITA)—before women were even allowed to apply to the military college—Guimarães stressed the grit it takes to make these steps forward. In the face of a shortage of black female role models in academic and professional spaces, and outright resistance from some who are privileged by that exclusion, she urged, “Go use what you learn to rise up in your career.” While acknowledging the role of affirmative action and calling for quotas in graduate programs, she insisted that young black women continue to fight to put their collective foot in the door to the future. “They can’t take knowledge away from us, and that’s how we’ll occupy these spaces.”