On June 28, the “Black Women for Marielle” roundtable—featuring six black pre-candidates standing for the October elections—was organized at Casa das Pretas (Black Women’s House) in Lapa. The event focused on the importance of representation by increasing the number of black women in power. As Casa das Pretas was the last place visited by City Councillor Marielle Franco before her assassination, the event brought up many memories of the councilwoman. It was an emotional event, celebrating Marielle’s achievements for black women and the LGBT community, and motivating other women to take on similar roles in Brazilian politics.

The entire event was very democratic, with plenty of opportunities for audience engagement. The first person to step up to the microphone was journalist Camila Martins, who emphasized the need for unity amongst black women. She recalled the Stonewall riots—an LGBT uprising against police violence in the United States. Martins talked about how the first stone thrown in the riots was by a black trans woman, Marsha P. Johnson, alongside her female partner. Martins noted this as an example of the political strength of black women in leadership positions. She also highlighted Marielle’s fight for the lesbian visibility bill, which was rejected by only two votes in the City Council, marking a very painful day for the LGBT community. Martins also noted that Marielle was one of the first female councilors to invite lesbians to be part of her office, seeking increased representation. The journalist ended her speech by reciting a poem by Conceição Evaristo dedicated to Marielle.

After a few speeches, it was time for the guest speakers to present their ideas. The panel was composed of six pre-candidates, all from Marielle’s party—the Socialism and Freedom Party (PSOL): Talíria Petrone, Renata Souza, Ivanete Silva, Rose Cipriano, Mônica Francisco, and Dani Monteiro. The first to speak was Monteiro, a social sciences student and beneficiary of affirmative action policies at the Rio de Janeiro State University (UERJ). Monteiro began her speech by making reference to the very location where the event was taking place, remembering Marielle: “It is still difficult to be here at Casa das Pretas. Even after the brutal murder of the councilwoman, it is important for black women to continue to show up fiercely to fight the State’s policies of genocide. Shall we reflect on the public policy we have today and how much it resembles a historical genocide? We are in 2018, in a country that was built on slavery. This legacy is present in our State, in the norms and morals of our State, which understands that black people should not exist.” She argued that it suffices to simply analyze the state’s budget and see that the budget for culture represents less than 1%, while public security represents more than 6%. Monteiro highlighted that the State prioritizes action and not prevention, which is clearly visible in a policy that invests billions to arm the police against the population.

“Our state has been under military intervention for more than three months. This intervention was carried out in response to the public disorder which our state was suffering. So we ask, what kind of public disorder is this? We have two imprisoned former governors. The current governor is being indicted and is on the verge of not finishing his mandate. Four out of the five counselors on the State Court of Auditors have been arrested for corruption. We have a state representative—who has presided over the Rio de Janeiro State Legislative Assembly (ALERJ) for 16 years—also awaiting trial for corruption. In other words, there is all of this disorder inside the Governor’s Palace and the Legislative Assembly—but the federal military intervention focuses on the people, the favelas, and the historically militarized areas,” said Monteiro. According to her, there is a clear distortion of priorities based on a strongly racist system. 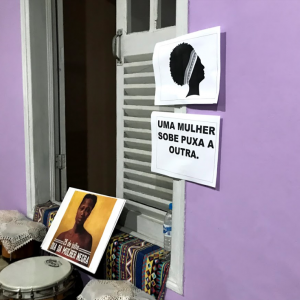 According to Monteiro, there is a great deal of crime in politics, and yet the prison population is 64% black. At the same time, black youth make up only 20% of university students. “And when we go to university, we will hear what I have heard: that those who don’t have the means to study [should] not study. University is for those who can [handle it]. When I tried to change my classes because I had a job, that’s what a professor said to me.” She emphasized that genocide goes beyond the 36,000 black people killed each year—it is also the marginalization of black culture, the marginalization of identity, and a lack of access to the city. “Only 5% of Alemão residents have regular access to the beach.” Monteiro stressed that it is important for marginalized people to take part in politics to represent the agendas of their own people and to prove to people still living in the communities that they are also political beings who can—and should—get engaged to drive change and transform structures. “We continue in our struggle to be and exist as we are,” she said.

After Monteiro, whose words moved the audience, the next person to take the microphone was Ivanete Silva, an educator from the Baixada Fluminense. Silva spoke about the struggle of black women in terms of identity. She said that it was important to reflect on where they come from: “Remember our mothers, the maids, the cooks, the laundry workers, the cleaners. It was these women in our lives who brought us to where we are today.” According to Silva, it is important to focus on rethinking and improving the place that each of us comes from instead of thinking about “fleeing” to the South Zone, where there is a higher quality of life. The struggle must be for the collective good of the community with which you identify—“that is to say, the place where I live, where I build together with people. This place needs to be empowered by the people who live there. This is our responsibility,” said Silva. She also talked about the importance of highlighting the culpability of local and international powers that prevent many areas from receiving necessary investment from public authorities. “Today, the power that we dispute is the power of the pen which will guarantee public health and education policies for black people. To dispute the locus of power is to return power to this people.”

The third speaker was Monica Francisco, a social scientist and evangelical pastor who was part of councilwoman Marielle Franco’s team. Francisco talked about black people confronting fear and marginalization. According to her, throughout history, black people have fought and resisted, but they have been excluded from the country’s history. Today, with the violence that primarily affects favelas, the struggle continues and is a matter of life and death. “It’s no coincidence that we have a woman who left her home at seven in the morning and was executed by the police. I’m talking about Claudia.” Francisco was referring to Claudia Silva Ferreira, who was shot after being caught in a shootout; subsequently, she was thrown into a vehicle by police, but her body fell out and she was dragged through the streets for 250 meters, hanging from the vehicle by her clothes. Francisco went on to state that there needs to be a “confrontation with the colonels, the landowners, the people who control this country’s politics”—and black women are capable of promoting this confrontation. The academic training of many [black women] has made it possible for them to be aware of the need to address injustices that are imposed. “Taking a stance is an act of survival,” she said.

The next speaker was journalist Renata Souza from Maré, who served as chief of staff for Marielle Franco and defended the thesis: “The Common and the Street: Youth Resistance Against Militarization.” According to Souza, the role of chief of staff is usually occupied by men, and the presence of a woman in such an important position is a challenge to current sexist societal models. “Men fight for the role of chief of staff, often to subordinate women. That’s why we do exactly the opposite. We have a very horizontal management model so that everyone feels like they are participating in this process,” she said.

Souza also answered a question from the audience about her main proposals for this year’s elections. One of her proposals is a change in the [racial] quota policy, which she believes is not inclusive enough: “The quota policy provides inclusion, but it does not provide sustainability for a student to complete their university studies.” Thus, Souza suggested the need for a change in the quota policy as a necessary measure to increase social inclusion. 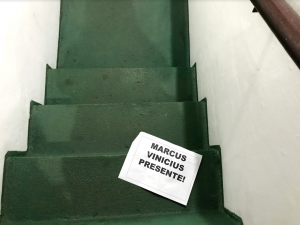 The journalist also talked about concrete actions to protect black youth who are dying in favelas. She mentioned the story of Marcos Vinicius—who was recently murdered wearing his school uniform in Complexo da Maré—to emphasize that police operations are disrespecting the right of black youth to go to school. “People’s lives in the favela are being held hostage by a public security force that does not guarantee the right to life.” Souza reported that a concrete action to reduce the problem would be Maré’s “public civil action,” which has already been approved by the judiciary. The policy determines that operations cannot take place during school hours and that, in order to occur, they must go through a series of measures like having a fire engine and ambulance available. Such measures would prevent operations from occurring without a fixed objective since nowadays many operations are only about seeking revenge for the death of police officers.

The next speaker was Rose Cipriani—a resident of the Baixada Fluminense, teacher in the municipal school system, and education activist. Cipriani affirmed that politics is a place in which black women are underrepresented—but this must change. “We need to strengthen our defense of the rights that we are losing. We are currently experiencing a situation in which rights are being taken away at a national level.” She gave the example of Marielle’s bill proposing to increase the number of spots in nighttime child care. Meanwhile, the State has decreased enrollment by approximately 76,000 over the past ten years. With this reduction, children are left on the streets while their parents work, and are left defenseless in the face of violence in favelas. “Where are these young people? Dying in the crosshairs of a rifle,” said Cipriani. She pointed out that people outside the metropolitan region do not have access to educational and cultural goods. “Sometimes we ask a young person from the periphery what he can access near his home, and most of the time, it’s a drug sales point.”

Finally, Talíria Petrone, a history teacher and councilwoman from Niterói, stepped up to the microphone. She started by paying tribute to Marielle, and to the families of all victims of violence in favelas and of the racism that pervades Brazilian society. “Black women for Marielle. Black women for Eduarda. Black women for Claudia. Black women for Bruna, the mother of Marquinhos. Black women for the family of Amarildo. Black women for the many who have been taken from us.” Petrone affirmed that social inequality is structurally racist and confronting racism needs to gain increased focus and importance. The racist structure generates the idea that some bodies cannot occupy spaces of power—or even move around the city. But the truth is that the black body is invariably a political body because it acts in a hands-on way, together with the community, to promote positive change. “When there’s a landslide, who turns up to make sure water doesn’t enter the neighbor’s house? Is it a woman? It is a black woman. That is political action,” said Petrone.

The motto “as one woman rises she pulls the next one up” was heard throughout each speech during the event. The activity ended with musical performances with lyrics focusing on resistance, capturing the sense of struggle and empowerment present at the event.