How should policymakers view the role of favelas in urban development? What policies can they enact to improve them?

These are the core research questions for Alexander Monge-Naranjo, Pedro Cavalcanti Ferreira, and Luciene Torres de Mello Pereira in their paper “Of Cities and Slums” for the Human Capital and Economic Opportunity Global Working Group, based at the University of Chicago. In the working paper, the researchers from the Federal Reserve Bank of St. Louis and Washington University in St. Louis and from the Graduate School of Economics at the Getúlio Vargas Foundation (EPGE–FGV) in Rio de Janeiro provide a thorough analysis of the development of some of Brazil’s major cities as a way to understand factors underlying the formation of favelas and their role in the process of the country’s urbanization. 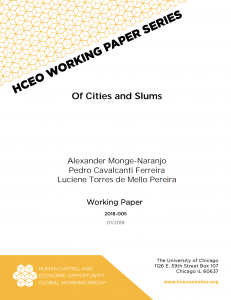 The researchers look at the rise of favelas in Brazil in the context of larger historical processes of urbanization. They consider structural transformation and urbanization as fundamental elements of a country’s development. From London to New York to Tokyo, the histories of the world’s largest metropolises have included large, prominent “slums” at varying points in time. However, in the current political and media environment, informal settlements are highly stigmatized and often associated with lawlessness, drugs, and poverty. Monge-Naranjo et al. argue the importance of evaluating the accuracy of two disparate conceptions of informal settlements: as either crucial or detrimental to a city’s growth.

Previous research gives insight into the motivations behind populational migration into cities and informal settlements. Duarte and Restuccia (2010) found that as a country grows and industrializes, most of its productivity growth comes from a shift of human resources from agricultural to manufacturing and skilled labor. This shift typically takes place during periods of national migration from rural areas to urban cities. Lall et al. (2009) found that these movements are typically driven by wage differences between rural and urban areas. Brazil experienced this migration during the twentieth century. However, like in many Latin American countries, the majority of migrants went into unskilled labor and service sectors, resulting in diminishing productivity gains. The researchers extrapolate from these previous studies to understand the exact dynamics of internal migration and informal settlement formation.

The researchers aim to create a functional model to understand the processes that contribute to urban migration and the educational, developmental, and demographic effects that these changes can have. The model is intergenerational, facilitating an understanding of the impacts of a single generation’s decisions upon their children. After effectively modeling the processes of rural to urban migration in Brazil, the system is then used to compare policy counterfactuals. These can be used to evaluate the most beneficial policies that a society can enact to improve national educational attainment and productivity.

The paper uses wide-ranging records to track Brazil’s changes over a period of 60 years. The researchers primarily use data from the national census, which has been conducted every ten years by the Brazilian Institute of Geography and Statistics (IBGE) since the 1950s. They use the census’s notation of “subnormal agglomerations,” defined as “a set of 51 or more housing units” with irregular traffic routes and land plots or a lack of essential public services, to trace favela populations over time. The Favela Census, conducted by Rio de Janeiro’s state government in 2008 and 2009 as part of the federal Growth Acceleration Program (PAC), provides an even more in-depth look into the statistics of life in favelas. The census gathers data from households in Complexo do Alemão, Complexo de Manguinhos, and Rocinha. Data on intergenerational transitions of educational attainment is drawn from the IBGE’s National Household Sample Survey (PNAD). Lastly, employment data comes from the Groningen Growth and Development Centre.

The process of structural transformation in Brazil largely conforms to general trends of urbanization while also shining a light on the economic impact of favelas. Brazil urbanized rapidly: from 1950 to 2010, employment outside of agriculture increased from 36% of the population to 84% and 40 million people moved to the nation’s largest cities. Economically, the country exhibited standard agricultural and non-agricultural labor productivity growth for the first 30 years of data. As there is higher productivity from non-agricultural labor than agriculture, the increasing productivity combined with the rapid urbanization strengthened the country’s economy considerably. These economic trends changed, though, after 1980. From 1980 to 2010, the country’s labor productivity outside of agriculture actually declined consistently. The researchers identify this as influencing the growth of favelas. As urbanization continued, an increasing number of low-skilled and low-paid workers migrated to work in cities, working in less economically productive jobs and finding residence in favelas.

Demographic reports suggest that favelas have grown in the period following World War II and have persisted over time. Based on the ‘subnormal agglomeration’ data, the portion of the population in Rio de Janeiro living in favelas grew from 7% in 1950 to 22% in 2010. In São Paulo, that growth happened even more quickly, more than doubling from 9.2% in 1991 to 23.2% of the city population in 2010. Surveys also suggest that while favelas attract many migrants, the majority of residents have now been there for multiple generations.

Impact of Favela Life on Residents

Data indicate clear differences in educational attainment among populations in rural areas, favelas, and formal urban areas. The IBGE Census shows that 80% of households in rural areas have little education—only four years or less. Urban populations show higher levels of educational attainment, but there is a large disparity between favela and formal urban households. Among favela residents, 70% of the population has one to eight years of schooling, whereas the same percentage of the population in formal urban areas has over five years and a significant percentage of residents has 12 years or more. This could stem from the fact that many children living in favelas do not have access to high quality schools in more well-resourced areas and rather attend public schools in or near favelas since enrollment is determined by place of residence.

While residing in a favela can statistically serve as an impediment for families’ educational attainment, the study found that favelas do offer potential benefits for employment opportunities. The Favela Census showed that the majority of surveyed favela residents work outside of favelas. Residents of Rocinha reported the highest levels of employment outside of the favela, likely due to the community’s proximity to wealthy neighborhoods. It can be inferred that many migrants to favelas move for better labor market access and employment options. This is confirmed by a study of the relative incomes of urban and rural workers. On average, urban workers earn 30 to 40% more than similarly educated rural workers. This income difference is particularly notable among workers with low education, where in Rio de Janeiro an uneducated worker can earn over 200% if they move to the city or 60% more if they live in a favela compared to rural earnings. While favelas might offer insufficient educational opportunities for children, they do offer the potential for better employment opportunities.

The final consideration of the model is relative housing costs for migrants. While urban migration increases access to significantly higher paying jobs and slightly better education, that benefit is often offset by higher housing costs. Census data shows that on average, rent will cost at least twice as much in cities relative to a similarly sized house in a rural area. The difference between the cost of living in the formal city and in favelas is notable as well, with houses in the formal city costing from 50% to over 100% more than houses in favelas. The relative improvements in employment opportunities for formal city and favela residents can then be offset by the high rents they are forced to pay. Families may be forced to decide between keeping their children in school or having them enter the workforce at an earlier age to compensate for the financial burden.

The researchers created a functional calibrated model of Brazilian urbanization that they can use to test a series of policy counterfactuals. They create a two-period model, replicating a similar process of structural transformation in 30-year periods from 1950 to 1980 and 1980 to 2010. The simulation is able to fairly accurately reproduce Brazil’s changes in population demographics, agricultural productivity, and educational attainment. This model then allows for the evaluation of several counterfactuals to understand effective policies for urban development.

First, researchers evaluate the impact of policies aiming to eradicate informal settlements. Many countries have responded to the development of informal settlements by arresting residents and destroying their homes. The model tests several possible situations, involving crackdowns of various levels of severity, from partially to fully evicting residents of informal settlements. There are several notable effects from these policies. First, cities would become much smaller without favelas to help facilitate the movement from rural to city dwelling. However, that would be followed by even larger favelas, as the relative price of labor would push city prices higher, making city dwelling less accessible. These policies work to create a strong socio-economic division between rural and urban living and would shift the country back to a predominantly agricultural society.

Through understanding the development of Brazil’s favelas, it is possible to evaluate factors for the development of informal settlements globally and extrapolate the findings into effective policy. Monge-Naranjo et al. find that, while not perfect, informal settlements and favelas can serve as stepping-stones for low-skill households to transition from rural areas to cities. Informal settlements tend to offer greater access to both job opportunities and education than what is available in rural areas. When compared to the formal city, however, it is evident that informal settlements are still unable to promote equivalent levels of skill formation and economic welfare. The researchers suggest several policy options that would facilitate a stronger process of structural transformation. Lowering housing prices within cities, increasing the quality of informal and city education systems, and ending anti-poor policies would all lead to more thriving cities and a more highly educated population.