This is the first of two articles covering the Favela Community Land Trust Brazil-wide Seminar. Read the second part here.

The Favela Community Land Trust National Seminar took place from June 22-24, 2021. Organized by the Favela Community Land Trust (F-CLT) Project*, the event brought together housing advocates from all of Brazil’s 26 states and the federal capital of Brasília together virtually in a series of online events. The main purpose was to introduce participants to the CLT model and invite them to reflect on the importance of formalizing housing while also discussing the national legal framework for the right to housing. 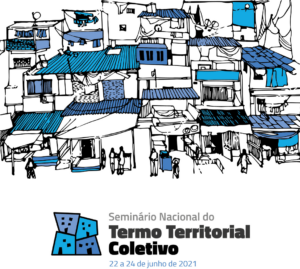 On the first day of the event of the over 250 attendees and 600 registered, there were community residents and leaders, researchers and students of the subject, representatives of public agencies, and citizens from all Brazilian states. Led by Tarcyla Fidalgo, coordinator of the Favela Community Land Trust Project; Felipe Litsek, F-CLT Project assistant; and Theresa Williamson, executive director of Catalytic Communities (CatComm), the organization responsible for the Project, the event started with a brief introduction by Litsek, who welcomed participants, giving special thanks to partners involved in the event, including the National Urban Reform Forum (FNRU), Brazilian Institute on Urban Law (IBDU), FICA Fund, World Habitat and the Center for CLT Innovation. Litsek summarized the aim of the event in a few words: “It is a new instrument in Brazil… the aim is to discuss the right to housing and land ownership.”

Williamson then outlined an overview of the right to housing and the importance of tenure security and strengthening communities to avoid eviction and gentrification. Through the knowledge of other international CLTs, especially those in Puerto Rico, where nine favelas have implemented this instrument with great success, Williamson reminded participants that “the situation of informal settlements is a global reality. 85% of housing worldwide is built ‘illegally.’ By 2050, nearly a third of all humanity will be living in informal settlements. We are introducing this debate knowing that we have a choice. We can keep seeing informal settlements as a problem or we can understand that they are part of our urban reality and think of solutions.”

Williamson also presented Maslow’s Hierarchy of Needs to remind the audience that the right to shelter is not a luxury but, rather, a basic necessity. She also made reference to the “20% Rule”—the minimum percentage of residents without access to market rate housing in any city in the world. “To contextualize the right to housing in Brazil, there are currently eight million empty homes and 222,000 people experiencing homelessness. We could also see favelas as a collective solution.” 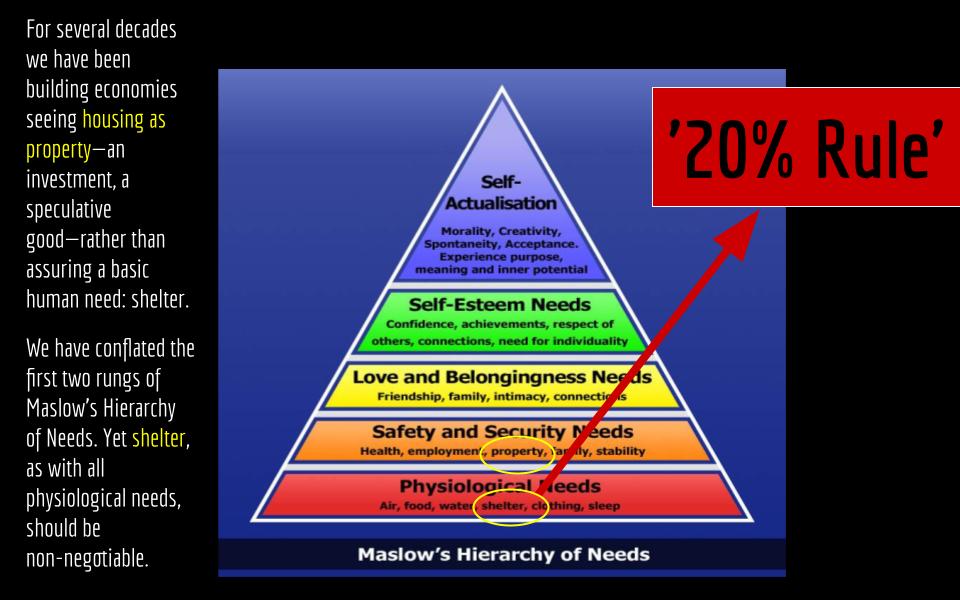 Following these interventions, the audience was divided into groups supported by F-CLT Project volunteers and members of CatComm for 15 minutes to reflect on the need to formalize homes in informal settlements, while also covering possible reasons for resistance to land regularization by residents.

Back in the plenary, Fidalgo shared some of the feelings and perceptions that participants expressed during group sessions. She said that, on the one hand, some held that land regularization would grant greater access to upgrades and public services, empowering the community, while others worried that this process could lead to an increased cost of living for residents, ultimately pushing them out.

To further discuss the possibility of land regularization, Fidalgo presented the three broad categories of current frameworks for land regularization within the Brazilian legal framework: concessions of use [both Concession of Special Use for Housing Purposes (CUEM) and the Concession of Real Right to Use (CDRU)]; adverse possession (both individual urban adverse possession and collective urban adverse possession), and land legitimation. After this brief explanation, she invited the groups to divide again to discuss the positive and negative points of each one of the formalization options most frequent in Brazil.

During this exercise, a talk by Jurema Constâncio, coordinator of the National Union for Popular Housing (UNMP) and resident of Jacarepaguá, in Rio de Janeiro’s West Zone, brought to light the difficulty of regularizing territories. “We end up having to rescue history. My dad used to plant coconut trees and on their tip he’d put a piece of aluminum with the date he planted the tree. Since we had no way of proving we’d otherwise been in this territory and our right to it, this was the only way to guarantee we could stay. We are coming into this [CLT] process trying to turn this space into a collective property.”

Back in the plenary, Fidalgo made sure to mention some of the participants’ comments: they said they worried about the importance of having a title; about the social exclusion of residents; and about being granted security of tenure over their territories. These are the same factors that led the team to look at other countries with models that account for titling and the guarantee of permanence in the territory, adding one very important third factor: placing residents as protagonists of their territories and their homes. This was how the Favela Community Land Trust emerged, as was shown in the animated video presentation of the project:

The CLT is a model of collective property management, not yet realized in Brazil, born over 50 years ago out of the Black Movement in the fight for civil rights in the United States. Through this model, those typically most affected by real estate speculation and gentrification have their housing rights protected. In order to establish a CLT, residents create a local organization, a non-profit legal entity managed collectively by them and their supporters. “The CLT is not an immediate solution that automatically provides land titles, exactly because that process ends up making the most vulnerable immediate targets by the speculative real estate market,” Fidalgo added. 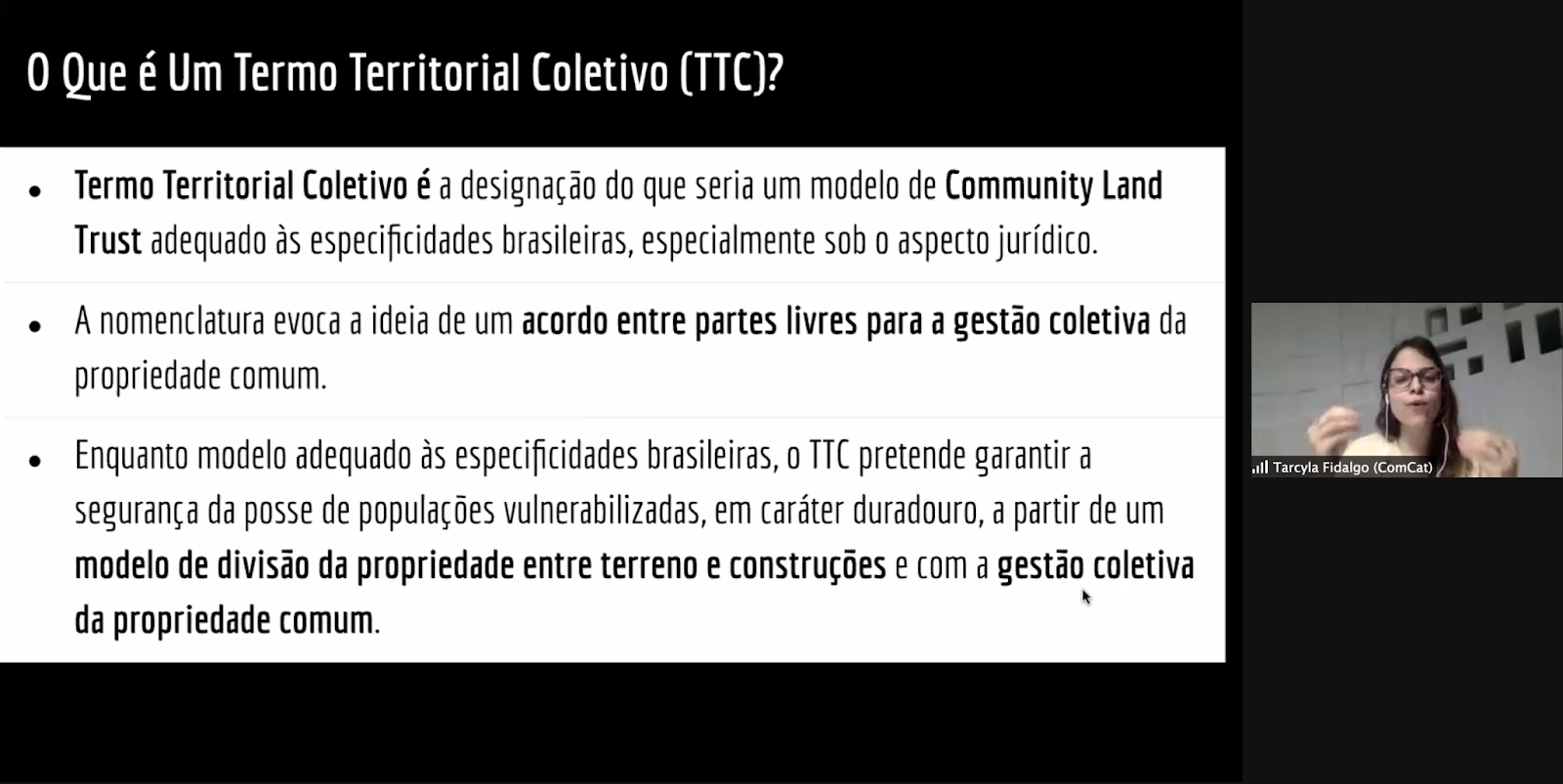 The project in Rio began with a series of workshops in August 2018 organized in partnership with institutions focused on housing rights. The Favela CLT Working Group was formed after this event. After these workshops, the Working Group began to think about which of the city’s communities might be interested in being CLT pilots.

After the presentation of the F-CLT as a land tenure model being developed over the past few years in Brazil, the participants were very curious about the idea of collective property management through a CLT.

Fidalgo closed by inviting everyone to attend the following two days of the Favela Community Land Trust National Seminar. She also encouraged participants to send in questions through a form made available online. And she pondered: “It may seem like the CLT formalizes land just like individual property titles do. But the F-CLT process does not bring with it a continued risk of eviction or an increase in the cost of living, but rather a protection of a community’s ability to remain in place.”

This is the first of two articles covering the Favela Community Land Trust Brazil-wide Seminar. Read the second part here.

Watch the First Day of the F-CLT National Seminar Here (in Portuguese):