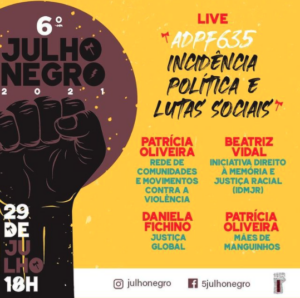 “The ADPF of the Favelas came as a breath of fresh air for everybody, reducing the number of deaths,” said Patrícia Oliveira, an activist from favela movements and member of the Network of Communities and Movements Against Violence, and of the Mothers of Manguinhos. She was one of the guests at the live event “ADPF 635: Political Impact and Social Struggles,” one of the activities of the 6th edition of Black July, held on July 29. With the participation of Daniela Fichino, from Global Justice; Beatriz Vidal, from the Right to Memory and Racial Justice Initiative (IDMJR); Juliana Farias, researcher at the State University of Campinas (Unicamp); and moderated by IDMRJ‘s Giselle Florentino, the meeting’s aim was to recall the creation of the Claim of Non-Compliance with a Fundamental Precept #635, ADPF 635, or “ADPF of the Favelas” as it has become known, and its political impact and significance for social struggles.

First to speak, researcher Juliana Farias recounted that after her studies, she began seeing the world through an academic lens, and narrated her experience during the two-day public hearing about the ADPF in front of the Brazilian Supreme Court (STF) when “the nation’s highest court of justice stopped to listen to people like Eliene of Manguinhos who showed the very roof of her home (in the favela)” to the justices. Farias also pointed out that not everyone who spoke at the hearing was on the side of human rights and favela movements. According to her, some of the addresses were shameful, saying, for instance that, “ending the police is the Left’s chloroquine” She was referencing the speaker’s attempt to discredit the legitimate request for the review of police practices in Brazilian favelas, or ADPF 635, by equating it to President Bolsonaro’s championing of chloroquine as a cure for Covid-19 despite its proven ineffectiveness. Farias depicted this victory in court as the result of the fight of social movements: black favela mothers are the true experts and they managed to suspend police operations in Rio’s favelas during the pandemic, barring “absolutely exceptional” circumstances.

Patrícia Oliveira underscored the importance of ADPF 635 to engage favela residents: “When residents became aware that there was an APDF (Claim of Non-Compliance with a Fundamental Precept) against police violence in the works, many got involved. We took many stances as a group. We always make decisions together.” Oliveira said that the current Attorney General of Rio de Janeiro, Luciano Oliveira Mattos de Souza, exhibited an authoritarian attitude by not listening to, and even interrupting women during meetings. She also talked about revenge police operations in the wake of the participation of favela movements in the ADPF discussions.

“On the day of the hearing, I mentioned that a lot of people there were afraid of being punished (by police). And they were punished! There were shootings in Borel, Manguinhos, and Maré that very same day… yes, it was retaliation! In other words, they were telling us, the ones who call the shots here are the Civil and Military Police, not the Supreme Court.”

Oliveira also pointed out the failure of the Prosecutor’s Office as a body for external control, as a guardian of the law and, above all, to guarantee the safety of residents and the confidentiality of the sources reporting unlawful police practices: “You’ve got to be very careful with the hotline number for the Prosecutor’s Office that is being disseminated. In a meeting with prosecutor Reinaldo Lomba, it was said that whistleblowers could become witnesses later on or even be prosecuted! Is that whistleblower willing to become a witness? Would that person feel safe being a witness? Most likely, no.”

Reduction and Increase in the Use of Deadly Force by Police

ADPF 635 was approved by the Brazilian Supreme Court almost a year ago. The petition was filed by the Brazilian Socialist Party with the objective of recognizing and preventing the serious and increasing use of deadly force by the Rio de Janeiro police. Daniela Fichino, Global Justice coordinator, highlighted that, despite having been filed by PSB, the ADPF comes from a long process initiated by the struggle of favela movements, the Black Movement, and mothers and relatives of the victims of State violence. 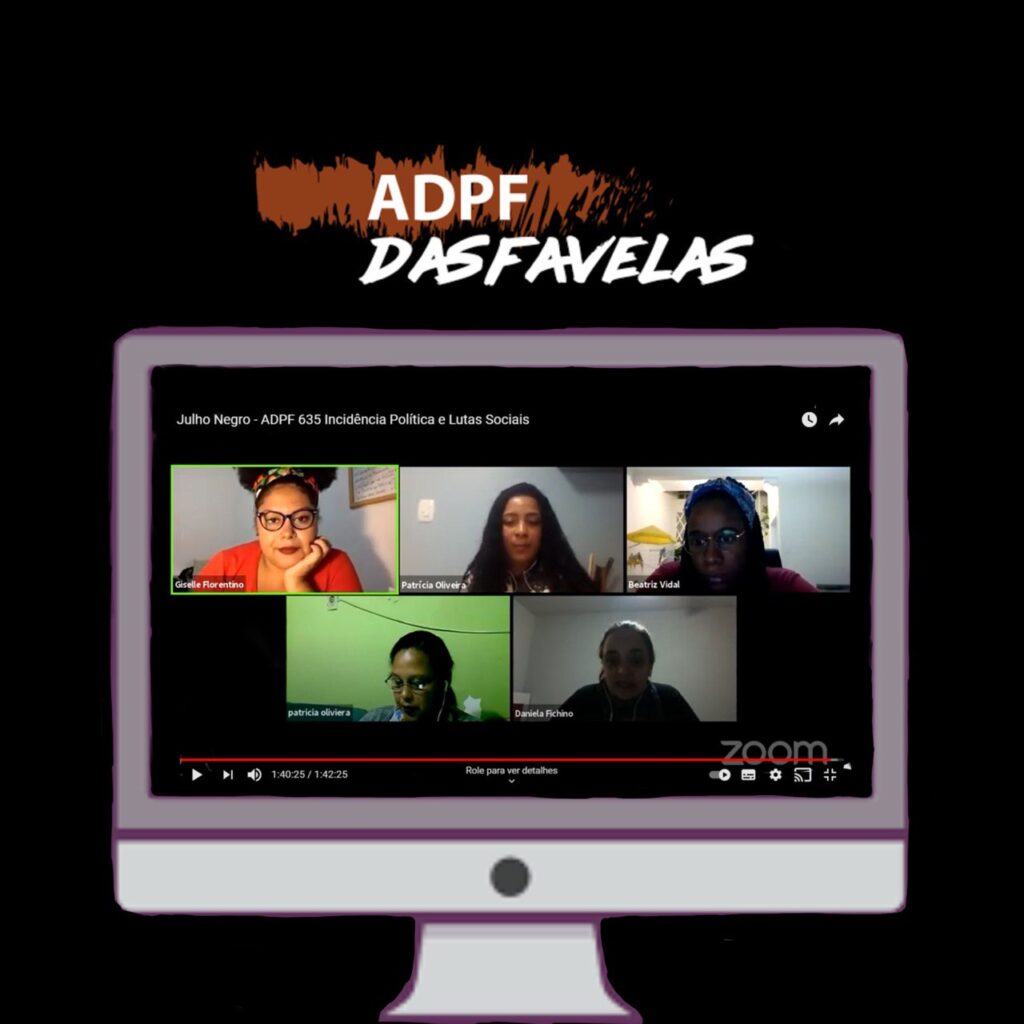 During her talk, Beatriz Vidal, legal advisor for the Right to Memory and Racial Justice Initiative, underscored the significant drop in the use of lethal force by the police during the first four months after the ADPF went into force, followed by an immediate increase in police interventions:

“It is quite clear that in the first four months after the justice’s ruling, in June 2020, there was a very sudden drop. This has been proven, studies have already shown this… by the [Fluminense Federal University’s] Group of Studies on the New Illegalities (GENI) showing that there was a clear drop in killings and in operations in Rio de Janeiro’s favelas. After this drop, however, we observed a sharp increase, which happened when the Military and Civil Police declared that everything would constitute exceptionality, namely, that everything would be justified as being exceptional, that everything they did was in a class of its own. For this reason, operations resumed and, due to them, killings. Therefore, we saw a significant drop and, after the first four months, a significant increase.”

The Police Have Never Killed So Much

Even with the STF’s ruling and the pandemic, Brazilian police forces never killed as much as they did in 2020. This information is provided by the Brazilian Yearbook of Public Security, which recorded a 190% increase since its first release in 2013. According to research organized by the Brazilian Forum on Public Safety, Afro-Brazilians are the main victims of police use of lethal force, accounting for 78.9% of the 6,416 people killed by police in 2020. This despite the fact that 56.3% of Brazilians identify as black according to the Brazilian Institute of Geography and Statistics’ (IBGE) 2019 National Household Sample Survey (PNAD).

2021 has not been different. In the first semester alone, nearly 15 shootings were recorded per day in the Rio de Janeiro Metropolitan Region, based on data collected by platform Fogo Cruzado. In a single day, 28 Afro-Brazilians were killed in the Jacarezinho favela in broad daylight, during a police intervention that culminated in the most lethal massacre in the history of Rio. This slaughter was promoted by the State, nearly one year after the STF’s injunction came into force prohibiting police from raiding Rio’s favelas.

“From the moment that an order issued by the Supreme Court is not followed, who do we turn to?”

This was the question asked by Patrícia Oliveira during the event. She also alerted attendees to the war weapons being acquired legally by the police and that will sooner or later be used against activists. Oliveira defended the importance of bringing together favela movements and academics. And she concluded by saying:

“If favela residents actually made money from drug trafficking, there would be no more favelas.”

“We can tell that the Prosecutor’s Office is not in favor of disclosing reports of deaths caused by police operations,” Beatriz Vidal pointed out, focusing on the negligence of Rio’s Public Prosecutor’s Office and highlighting the role of Supreme Court Justice Edson Fachin, the first to approve ADPF635:

“After the Jacarezinho massacre, Rio’s Civil Police imposed five years of confidentiality on all of the acts perpetrated, going against the Access to Information Law. Since then, there has been a ruling by Justice Edson Fachin to ban this decree, making public all the facts occurring during the operation and the Public Prosecutor’s Office responsible for investigating the crime. That is never going to be enough, but… having a Supreme Court justice attempt to change the situation is already an improvement.”

Daniela Fichino concluded: “The Public Prosecutor’s Office has not been fulfilling its role.” Fichino brought into question how fragile the Prosecutor’s Office’s hotline is for protecting the lives of whistleblowers, besides the Office’s general lack of political will. In her view, “this omission costs lives.” She furthermore underlined the impact of the action, such as the participation of mothers, collectives, movements and other entities at the STF’s public hearing.

Fichino also stressed what the period of suspension of police operations due to the ADPF of the Favelas revealed:

“The main achievement of the ADPF of the Favelas was the suspension of police operations during the pandemic… along with the reduction, after Justice Edson Fachin’s injunction, not only of police use of deadly force, but also of crimes against life and against public property. This in fact serves to deconstruct an argument frequently used, although entirely false… that is perverse and has the clear political aim of exploiting extermination policies, which is the argument that such operations are carried out to guarantee public safety. That is a flat-out lie… it is the blatant implementation of a policy of extermination.”

About the author: A graduate from the Federal University of Bahia (UFBA), journalist Camila Fiuza hails from public schools and is a member of the Northeastern chapter of the Mothers of May. A black, peripheral woman who fights for human rights and against racism, she has contributed to community radios and worked for Record TV Itapuã and Band News FM radio, in Salvador.

*The 6th Annual Black July has the objective of strengthening the fight against militarization, racism and apartheid in Brazil and in the countries of the Global South. It is an international articulation organized by the following favela movements and organizations, and allies in the state of Rio de Janeiro: Network of Communities and Movements Against Violence, Movimento Moleque, Mothers of Manguinhos, National Network of Mothers and Relatives Victims of State Terrorism, Mothers of May Independent Movement, Roots in Movement Institute, Maré 0800, Right to Memory and Racial Justice Initiative/IDMJR, Institute for the Defense of the Black Population/IDPN, Manguinhos Social Forum, Youth Forum RJ and State Front for Decarceration RJ, Global Justice, Pacs Institute and Fase RJ.