This article is part of ongoing coverage by RioOnWatch of forced evictions in Rio de Janeiro’s favelas, despite these communities’ historic consolidation and acquired legal rights.

The threat of eviction has once again come knocking on the doors of the residents of the Estradinha community, located within the Tabajaras favela, overlooking the São João Batista Cemetery, in Botafogo, in Rio de Janeiro’s South Zone. City government employees showed up in the community on Tuesday, August 17, escorted by police from the local Pacifying Police Unit (UPP) and pasted notices on the doors of at least 30 homes. The notices informed that the houses would be torn down the following day.

On Wednesday, August 18, the City’s employees did not show up as announced. The delay of a single day gave the community an opportunity to organize and resist. Estradinha has a long history of successfully resisting eviction, but the possibility of losing their homes overnight left residents in a panic. The community mobilized itself and contacted the Rio de Janeiro State Public Defender’s Office‘s Land and Housing Nucleus (NUTH). On that same evening, a lawsuit was filed during the Rio de Janeiro State Court of Justice (TJ-RJ)’s night shift in an attempt to stop the demolitions that would take place the following day.

The ruling in favor of the community stopped the homes of Estradinha from being torn down, although that was not enough to prevent the demolition of a house in a neighboring locality known as Coroa. There, the City tore down a home with the argument that the property was not being used for housing. However, photos and videos show furniture and objects being removed from inside the house and placed in an alley. With the residents out when the city employees arrived, the door was broken down so that the unoccupied house could be demolished. When residents returned, they were unable to get in to access their belongings. 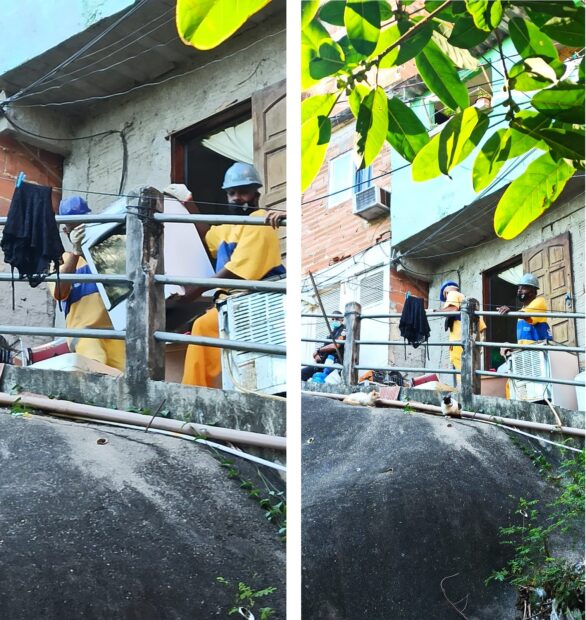 Estradinha is at the center of a legal battle against threats of eviction that began during returned-mayor Eduardo Paes’ first administration a decade ago. The action carried out this week, as public defender Adriana Beviláqua reminds us, ignores a lawsuit from 2010. “We argued that the City was disobeying the ruling derived from a civil lawsuit filed by the Public Defender’s Office stating that in order to tear any building down in Estradinha, the municipality must first provide the population and the Public Defender’s Office with a technical risk assessment. Without submitting this, which means nothing more than to comply with the City’s Organic Municipal Law, they cannot tear anything down,” explained Beviláqua, responsible for the injunction that stopped the demolitions from happening in the favela.

Furthermore, the short time between the handing out of notices and the beginning of demolition is, in itself, a violation, for it does not provide residents with enough time to prepare a defense and appeal the decision. “You cannot notify a resident of an immediate demolition without giving them the chance to do what is guaranteed by the Brazilian Constitution and in our legislation, which is the right to a full defense,” stated the public defender. Beviláqua also pointed out that the notices do not include the administrative case number or deadline for reply.

Despite the favorable ruling, the judicial decision that prevented Estradinha’s buildings from being torn down can be reversed at any moment. That is because the City can appeal and get authorization for the families’ evictions and buildings’ demolitions from the Court.

Facing a possible new surge of evictions, the feeling that stays with those who live in Estradinha is one of insecurity. Housing is a right and evictions are an encroachment on the history of favelas. Home to the employees of the São João Batista Cemetery, the Estradinha community was first established in 1952. Since then, the territory benefited from several government programs aimed at favelas, including being granted permission by public authorities for new families to settle in the locality.

Estradinha and the Olympic Legacy of Evictions

In the period preceding the Olympic Games held in Rio de Janeiro in 2016, a series of renewal schemes across the urban space brought on the direct and indirect removal of thousands of families. Entire communities were removed. Right at the beginning of this process, in 2010, the municipality announced its plan to remove “the community located above the São João Batista Cemetery,” claiming that it occupied an at-risk area. Residents were then offered financial compensation, assisted purchase schemes or registration in the My House My Life federal housing program. 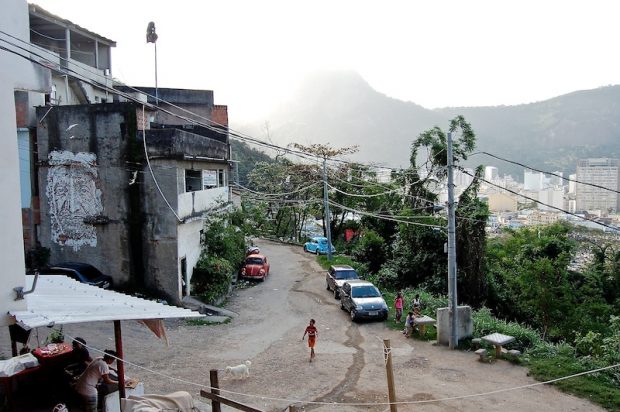 Concealed threats were one of the strategies used to remove families from their homes. As described by local leader Maria de Fátima Amorim, known as Sister Fátima, labeled “invaders” and under strong pressure by public authorities, some residents chose to leave the area. The heavy rains that struck the state of Rio that year were also part of the strategy adopted by the city administration. Storms caused landslides in various hillside favelas, which in turn were used by authorities to instill panic and encourage residents to leave their homes. Although no incidents with victims were recorded in Estradinha, these events were used to spread misinformation and strengthen the claim that the community was located in an “area of risk.”

Thus, still in 2010, the first houses were demolished. And as houses were torn down, the risks to the safety and stability of neighboring buildings, as well as the hassle created by the buildup of rubble, pushed other families away from the community. The panic created served as an incentive to sell their homes. With almost two-thirds of the community razed to the ground, it got increasingly difficult to remain in Estradinha.

The mountains of rubble left behind after the demolitions attracted insects and blocked stormwater runoff, contributing to the oversaturation of the soil. At the time, a technical report released by Geo-Rio, the municipal department responsible for conducting geological risk assessments, named the Estradinha community, as well as seven other favelas, “high risk” areas. With this, the Rio de Janeiro city government insisted on the removal of the entire community.

It was in this context that Sister Fátima and the entire community began to mobilize in order to resist and fight for their right to exist. Besides the support of the Public Defenders Office’s Land and Housing Nucleus, the community gained the assistance of a network of supporters made up of engineers, lawyers, architects, and many friends. From this collective effort, more organized attempts at resisting removals in the territory emerged, including carrying out an independent technical report, bringing the community together to discuss the project and the right to housing.

A researcher and doctoral candidate in Sociology and Law, Carolina Pires is one of the members of this support network. She has been following up on the Estradinha situation since 2010 and also takes part in a network that aids other communities threatened with eviction, such as the Horto community, in the Botanical Gardens neighborhood. She agrees that “environmental protection” is being used as an argument by public authorities to carry out evictions. “It is a perverse argument, used solely to remove favelas that have mostly black and poor residents. They do not evict the mansions built inside the forest,” illustrates Carolina.

If the area’s safety from landslides was the argument used to promote evictions in 2010, the preservation of the environment emerges as the main motivation for the actions carried out this week in Estradinha, as explained in a note published on the Rio de Janeiro city government website. However, this logic, that places the favela and the environment at odds, dismisses the potential that these territories and their residents have in promoting a lifestyle that protects and preserves nature, as many experiences in Rio de Janeiro favelas show.

An irregular construction at the Paisagem Carioca Municipal Natural Park, in Ladeira dos Tabajaras, was torn down this morning.
The property was inside an Atlantic Forest area, posing a risk to the environment and to people.

Furthermore, public defender Adriana Beviláqua explains that an ongoing debate in the judiciary has been trying to ascertain whether or not the Estradinha community is inside an environmental protection area and the effects of this. She also says that being a very old community weighs in favor of the residents: “In Brazil, we have legislation that allows for land regularization of consolidated communities, even when located in an environmental protection area.” Beviláqua lists various legal mechanisms that guarantee this right. Among these are Law 13,465, from 2017, the Conama Resolution, and the 2012 Brazilian Forest Code. All of them make regularization and permanence of homes possible, recognizing the right, the roots and the history of communities.