Historically, to resist, build and progress are verbs that black women have carried within them, whether they’re aware of it or not. Whether through life’s daily demands or political activism, from the fight against slavery in quilombos to our current so-called democracies, black women do politics in the streets and in political arenas all over Brazil, Latin America and the Caribbean.

These lenses are the starting point for the Portuguese-language podcast “From Building Quilombos to Democracy: Voices of Afro-Latin and Caribbean Women” in building a mosaic of voices made up of different generations of black women born between 1950 and 1990, aiming to explain not only the origins of the the Day of Black Latin American and Caribbean Women, July 25, but how black women create strategies to struggle and resist the invisibility and silencing of their voices by patriarchal and racist systems. 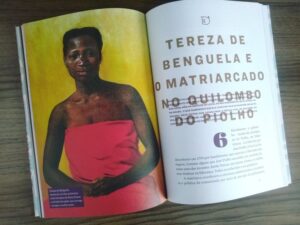 More than a moment for tributes, the date—that since 2014 in Brazil also marks the National Day of Tereza de Benguela and of Black Women—is a symbol of political mobilization of Afro-descendant women in diaspora in Latin American and Caribbean democracies. July 25 has its origin in the First Meeting of Afro-Latin American and Afro-Caribbean Women, which took place in the Dominican Republic in 1992 bringing together 350 black women from 72 countries.

The practical efforts of black women in Brazil—in large community-integrated actions in support of their families in peripheries and favelas, in survival strategies, or in political and feminist activism—build Brazilian democracy every day. Their bodies build Brazilian society, even if they are dehumanized in their day-to-day lives.

Black women are those who suffer the most violence, those with the highest death rates Still, they have hope and produce knowledge. Most of all, they demand access to full rights as citizens and to democracy.

Who Are the Voices Featured in the Podcast?

Queen Tereza, as Tereza de Benguela is known, led the Quariterê Quilombo, a community of those who fled enslavement in the Brazilian state of Mato Grosso. She represents so many black women made invisible by official history. An ancestral voice that marks memory and this specific day, Tereza de Benguela’s path has been gaining notoriety. A symbol of resistance, she lived in the 18th century in the region of Vale do Guaporé. Hailing from an African dynasty, Tereza de Benguela was enslaved and brought to Brazil where she was able to run away with her partner, José Piolho. After his death, she became the leader of the Quariterê Quilombo, which housed over 100 people, 73 Afro-Brazilian and 30 indigenous. The quilombo resisted from the decade of 1730 until the end of the century. Tereza de Benguela is still a reference for the women of the municipality of Vila Bela—where there is currently an intergenerational women’s group called Heiresses of the Quariterê Collective—but also for Afro-Brazilian women nationwide.

Journalist and Black Movement activist Daniela Gomes was born in 1982. Born and raised in the periphery of São Paulo, she is assistant professor of African Studies at San Diego State University. With a doctorate in African and African Diaspora Studies from the University of Texas, she researches the transformative power of hip-hop as a tool for the empowerment of black youth in São Paulo. In 2016, Gomes delivered The Power of Hip-Hop at TEDx São Paulo, where she was able to speak about her activism and relationship with the hip-hop movement. In 2019, she gave a talk entitled The Impact of Bolsonaro in Brazil for PBS’s Blackademics program, on North American public television.

Born in 1959, Lucia Xavier is one of Brazil’s most influential human rights and Black Movement activists. The daughter of a domestic worker and a radio host who died prematurely, Lucia opted for the college entrance exam to study Social Work, though she’d been fully prepared to study Law. In 1992, she founded Criola, an NGO dedicated to fighting racism, sexism, and homophobia. She was a parliamentary advisor in the State of Rio de Janeiro’s Legislative Assembly (ALERJ) between 1991 a 1997. In 1999, she helped establish the Homosexual Defense Hotline (DDH), a pioneering public service for LGBTQIA+ people. At the III World Conference Against Racism, Racial Discrimination, Xenophobia and Related Intolerance, organized by the United Nations in Durban, South Africa in 2001, she served as proofreader of the Durban Declaration and Program of Action.

Bianca Santana, 37, is a journalist and writer with a master’s in Education and a doctorate in Information Science from the University of São Paulo (USP). Her thesis is about memory and the writings of black women. Santana is the author of When I Discovered Myself Black, and organizer of collections The Ancestral Innovation of Black Women: Everyday Tactics and Policies, Insurgent Voices of Black Women: From the 18th Century to the First Decade of the 21st Century, and Open Educational Resources: Collaborative Practices and Public Policies. She is executive director of Casa Sueli Carneiro and an active member of UNEafro Brasil, a movement that helps comprise the Black Coalition for Rights. A columnist for ECOA-UOL and for Gama magazine, she also penned the biography I’m Still Black: The life of Sueli Carneiro, that discusses four decades of activism by one of the most important figures in the history of Brazil’s Black Movement: Sueli Carneiro.

With a master’s in Journalism and English from the University of North Carolina, and a bachelor’s in Modern Languages from the State University of Rio de Janeiro (UERJ), Anielle Franco, 37, currently works as a professor, writer, and lecturer as well as director of the Marielle Franco Institute. “Marielle‘s sister and proud of it,” Franco is also the mother of two black daughters and is currently studying for a master’s in Ethno-Racial Relations at the Federal Center for Technological Education of Rio de Janeiro (CEFET-RJ). In July, she released The Radical Political Imagination of Black Brazilian Women (Oralituras 2021), a book of essays and speeches organized alongside Ana Carolina Lourenço. Franco is also in the documentary series Where Are We Going (2021), available since the beginning of September and streaming on Globoplay.

Born in 1984, Glaucia Marinho graduated from PUC-RJ with a degree in journalism and went on to get a master’s in Education, Culture and Communication from UERJ. Currently Global Justice‘s Coordinator of Communication, Marinho is a human rights activist who participates in social movements against racism and for housing rights. She served with the Front for Popular Struggle (FLP) supporting autonomous homeless occupations organized in Rio’s Port Region in the 2000s. Marinho lived in the Chiquinha Gonzaga Occupation and then in Morro da Providência, where she fought against the forced evictions imposed on the favela leading up the Rio de Janeiro World Cup and Olympics. With the FLP as a starting point, she became a supporter of the Network of Communities and Movements Against Violence, a movement of mothers and relatives of victims of State violence.

Sabrina Martina, also known as MC Martina, is a rapper, poet, and producer. At 23, MC Martina has been leaving her mark on the country’s cultural scene. She is the creator of Slam Laje, Complexo do Alemão’s first spoken word poetry battle, and one of the groundbreaking slams to take place inside a favela in the state of Rio de Janeiro. In 2018, she was a lecturer at TEDx Porto Alegre, where she used marginal poetry and rap as tools for engagement and transformation. Martina is also one of the founders of Favela Poets, a collective that carries out “poetic attacks” in Rio’s public transport and spaces, and a member of Movimentos, a group of peripheral youths from Rio who debate and believe in a new drug policy.

Listen to these inspiring women reflect on the meaning of July 25 in their original voices in Portuguese here:

About the author: Tatiana Lima is a journalist and popular communicator at heart. A black feminist, member of Complexo do Alemão’s Researchers in Movement Study Group, she works as a reporter and network manager at RioOnWatch. A fair-skinned black woman, born and raised in a favela, Lima currently lives in Rio’s periphery and is a doctoral student at the Fluminense Federal University (UFF).

About the artist: Natalia de Souza Flores, born and raised in Rio’s North Zone, is a member of the Brabas Crew. With a degree in Graphic Design from Unigranrio in 2017, she has worked as a designer since 2015. She launched a magazine of collective comics called ‘Tá no Gibi’ in 2017 at the Rio Book Biennial. Her main themes are based in African culture, using cyberpunk, wicca and indigenous elements.

Jaqueline Suarez is a reporter and impact manager, and RioOnWatch’s podcast coordinator. Born and raised in Morro do Fallet, Suarez collaborated in the narration and editing of this episode.

Letycia Nascimento holds a B.A. in journalism from the Rural Federal University of Rio de Janeiro (UFRRJ) and a master’s in Media and Everyday Life from the Fluminense Federal University (UFF). Born and raised in Rio’s West Zone, she is currently doing her doctorate in Media and Everyday Life, researching citizen and digital communication and indigenous ethnomedia. In this podcast episode, she narrates Sojourner Truth‘s speech Ain’t I a Woman?