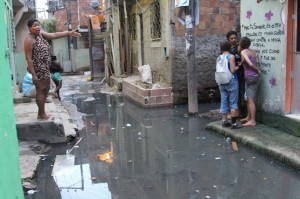 Manguinhos residents denounce a year’s worth of standing sewage water in an area where PAC upgrading supposedly addressed infrastructure issues.

“Here we are, abandoned in the sewage!” two Manguinhos residents exclaimed, pointing to the flooded, mosquito-ridden streets encircling their homes that had been that way for over a year. They recounted that government programs such as the federal Growth Acceleration Program (PAC) and PAC II had promised infrastructure improvements to the community, but none of them had addressed the urgent sewage situation. “I have six children (including a newborn). Where I am going to go?” one woman explained, exasperated.

These complaints were voiced during a protest dubbed “Impacted Communities” held Saturday, April 13th, during which representatives from different social movements across the city proceeded through Manguinhos denouncing the precariousness of health and sanitation infrastructure in the aftermath of various government projects. The event was conceived two months prior when leaders from several movements—including the World Cup and Olympics People’s Committee, Aldeia Maracana, the Rio de Janeiro Health Forum, and Manguinhos’ own Human Rights Laboratory—got together to exchange experiences regarding highly contested privatizations, arbitrary removals, and a general restriction of citizenship, as well as articulate organizing strategies. 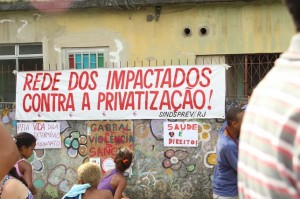 The “Networks of Impacted Areas Against Privatization” united several groups from the city of Rio.

The conditions being denounced were visibly manifested at several points throughout the day. When the groups met at a plaza in Manguinhos in Rio’s North Zone, news surfaced that the event’s organizer Fernando Soares, president of the Laboratório de Direitos Humanos, was suffering from a case of dengue fever and would be unable to lead the community walk-through. The group witnessed polluted and clogged drainage ditches and overflowing garbage dumpsters, set against a backdrop of children playing soccer in a field barren of public infrastructure. Behind the field, some residents still lived in partially-demolished rows of houses.

The speakers that opened the event discussed the importance of unity and giving a voice to “groups who are unheard and invisible.” One protester dressed in indigenous attire as a reminder of the recent, ongoing mobilization surrounding the Aldeia Maracana as an example for other activists in the city, saying, “I have never seen so many diverse people from Rio so unified about a cause.”

Speakers discussed the closure and privatization of public health facilities without adequate alternative care, water and air pollution in Santa Cruz due to the Thyseen Krupp mine, lack of transparency and dignity in housing removals, and the PAC’s “superficial make-up” public works in Manguinhos that have failed to effectively upgrade the community’s sewerage system. Organizers also denounced hostile UPP behavior toward residents of the community, which includes daily random searches of personal possessions and racial slurs. 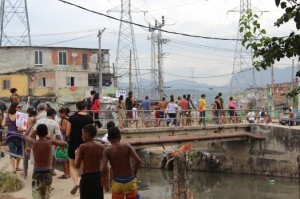 The walkthrough of Manguinhos, in Rio’s North Zone adjacent to the community of Jacarezinho, lasted over three hours.

After these speeches, the protest made its way through Manguinhos encouraging residents to take the microphone and add their own commentary at various stopping points. A primary criticism was that although the community has received millions of dollars-worth through PAC I and PAC II investments, the projects have failed to address the community’s most urgent needs. In addition to this, residents and organizers also denounced the arbitrary housing removals that have been taking place in Manguinhos since 2009 purportedly in order to upgrade the community. The lawyer defending those families trying to remain in their homes explained that residents are not being given “the minimum conditions to complain, nor to oppose what is being done to them.” Protestor Monica Lima of the Rio de Janeiro Health Forum said that the authorities employ an inhumane expulsion tactic: abandoning residents in the middle of the garbage and rats, cutting public utilities such as light and water, and permitting unhealthy and unlivable conditions to force families out. Residents also reiterated that the quality and size of government resettlement housing (40 square meters) which has been constructed along the edge of the Manguinhos community does not qualify as dignified housing. 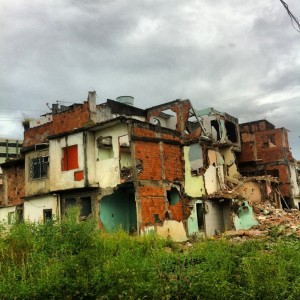 Some residents still live among rows of housing from which their neighbors have been removed.

Three hours along, the group entered a series of thin alleyways flooded with six inches of sewage water, where a resident had died recently due to an infectious disease. “This is what good the PAC has done for us,” one resident said darkly, alluding to the program’s misappropriation of funds and unresponsiveness to basic demands for years. Watermarks two feet high drew rings around the homes on each side, indicating the height of the water when rain was heavy. Mosquitoes buzzed.

In Monica Lima’s view, these individual examples of precarious infrastructure and government neglect are in fact part of a larger “global city” project that generates profits at the expense of the city’s poor. “This is a model of development that will favor whom?” she stated. This project—in which hosting mega-events and attracting huge private enterprise are central—is one that “expels the poor… and does not generate jobs…[or] resolve the structural problems.” In reference to the city’s privatization of the healthcare system, she concluded that “the capital, those in power, they are choosing who should live and who should die.” 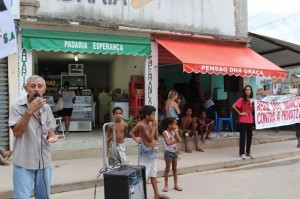 Residents from Manguinhos took up the microphone as the group moved through the community, speaking to their specific experiences of government upgrading and policing programs.

Organizers will be meeting periodically in upcoming weeks to discuss further resistance strategies and incorporate other communities facing human rights violations into the discussion. “Here in Manguinhos,” one woman explained, “we already do that—meet up with each other and share perspectives about what’s happening to people so the resistance can grow.” The next “Ato-Encontro” will take place on Friday, May 31st at 1pm near the Residents’ Association of Vila Turismo/Favelinha.

“People here have just gotten used to waiting for a miracle,” explained one resident during the day’s event. “It’s not going to happen from outside just like that.”

This article was written by Catherine Osborn, Kate Steiker-Ginzberg, and published on April 30, 2013.
in by International Observers, Civil Society, Event Reports, Policies, Violations