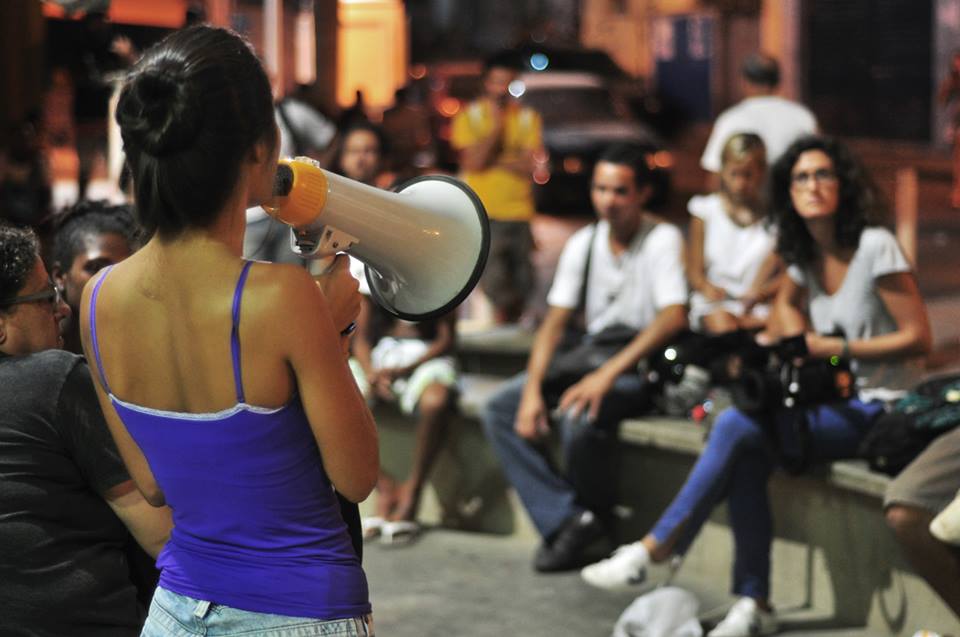 Members of Occupy Alemão, who chaired the public meeting, distributed and read a manifesto, “We want to be happy and walk freely in the favela where we were born.” The manifesto was collectively written by Occupy Alemão, Raizes em Movimento, Educap, Jornal Voz das Comunidades and other community representatives and collaborators. It expresses their demand to have their voice heard and for the human rights of residents of Complexo de Alemão and other favelas to be respected. It highlights that “proposals for “PEACE” must be elaborated collectively with all of the favela. A policy for peace is not built with one foot in the door, freely assaulting residents, peace is not built with a caveirão (war tank).” This collective voice demonstrates the growing movement denouncing the failures of the Pacifying Police Units (UPP) policy and constructing alternatives to militarization during this critical moment in the UPP program. 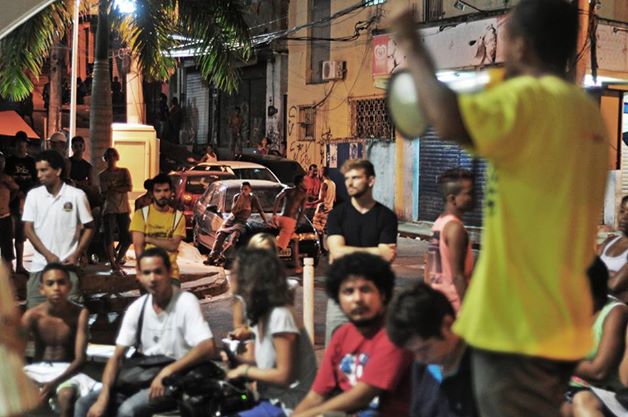 During the past week, Complexo de Alemão has experienced intensified military police repression. On Saturday the BOPE (Special Operations Battalion) entered the favela to carry out a military operation, and have since been training UPP officers in military tactics. On Monday evening several members of the community told of having suffered physical and verbal abuse, humiliation and even death threats for being outspoken critics of the UPP policy.

The collective plans to continue to hold these public meetings, with the aim to increase participation of residents of Complexo de Alemão and to concretize proposals for actions which express alternatives to the current model of “pacification.” The first big action will take place on the April 21, a day of artistic intervention called, “We want more than just police.” In the midst of so many episodes of tragedy and violence related to police and community relations this year, this nascent civil society movement presents the potential to break a historical pattern of disrespectful and dehumanizing public security policies in favelas, a promise made but not fulfilled with the UPP program.

Manifesto: We want to be happy and walk in the favela where we were born

In the last few weeks, newspaper headlines have been dominated by articles about conflicts occurring daily in UPP-occupied areas, above all in Complexo de Alemão. These headlines are accompanied by declarations made by the State Security Secretary, José Mariano Beltrame, who presented the option of extending the militarization of favelas as a possible solution for the problems. It seems that in his view, all conflict is resolved by increasing the presence of the police and other armed forces in these territories.

It is our understanding that this perspective needs to be changed, as it is clear that the presence of police alone has not brought peace. There are many cases of abuses of power, arbitrariness and disappearances in favelas with a UPP as is the deaths of Amarildo, in Rocinha; José Carlos Lopes Júnior, 19 years old, resident of São João; Thales Pereira Ribeiro D’Adrea, 15 years old, Morro do Fogueteiro; Jackson Lessa dos Santos, 20 years old, Morro do Fogueteiro; Mateus Oliveira Casé, 16 years old, Manguinhos; Paulo Henrique dos Santos, 25 years old, City of God; Aliélson Nogueira, 21 years old, Jacarezinho; Laércio Hilário da Luz Neto, 17 years old, Morro do Alemão e Israel Meneses, 23 years old, Jacarezinho. We cannot fail to mention the police officers who have died in this suicidal action of the State. We do not accept these deaths. No life is worth more than another and the State must take responsibility. After all, what kind of peace do we want to promote? Warlike peace? Militarized peace?

This past Sunday, March 16, the front page of the Extra newspaper announced that residents of Complexo de Alemão had taken to the streets to protest under the orders of drug traffickers and that they were receiving money for doing so. Once again, the mainstream media has played its role in the criminalization of social movements and of the favela. We refuse to accept the way in which mainstream communication channels have covered the police action in Complexo de Alemão and other favelas. Favela residents cannot be seen as the enemy. The government says that the favelas are pacified. Why then do the police display so many weapons? We want more dialogue between favela residents and the State’s public security present in the territory. We want the freedom to come and go. We want more schools and basic sanitation for residents instead of a cable car for tourists. We want the guarantee of our right to expression, which is where baile funk comes in. We do not want our homes violated without search warrants. Understanding the demands of Complexo de Alemão is simple. Understanding the demands of the favela is simple, because this is straight talk.

Proposals for “PEACE” must be elaborated collectively with all of the favela. A policy for peace is not built with one foot in the door, gratuitously assaulting residents. Peace is not built with a caveirão (war tank). In the current model, “independent of who gives the orders,” residents’ voices continue to go unheard. We are aware that the poor person has their place.