Almost nine months after 43 Mexican students were abducted, three parents and a classmate of the 43 Normalistas visited Rio de Janeiro last week to conclude the Caravana 43 journey across South America.

Parents Mario César González, Hilda Hernandez Rivera and Hilda Legideño Vargas, along with Normalista survivor of the attackFrancisco Sánchez Nava, comprised the Caravana. The group, which also visited Argentina and Uruguay, met with Brazilian victims of violence, activist groups, indigenous groups and education activists in diverse areas of Rio. The Caravana’s objective was to form a strong network with other Latin American movements and unite strengths against ‘state terrorism’ in Latin America, Sánchez Nava said.

The Caravana launched its week of activities in Rio with a press conference to an audience of almost 60 activists and journalists on June 9, downtown. The four guests told passionate stories of the night of September 26, as news of their disappeared sons unraveled. They asked for support from the Brazilian people and demanded the 43 students be returned alive.

González said parents of the 43 students still believe their sons are alive because none of the evidence presented by the Mexican government is considered reliable. He added that independent Argentine investigators had questioned the scientific credibility of the evidence.

“If we have to go to the edge of the world to find these kids, we will,” González said.

The event ended with a loud, “Vivos se los llevaron, vivos los queremos!” (“They were taken alive, and we want them back alive!”), a chant that would be repeated throughout the week. 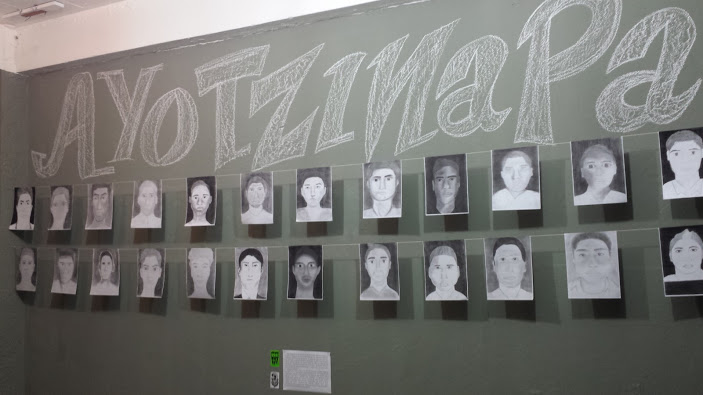 On June 10, the Caravana spoke at the Museu da Maré, a museum located inside one of the largest favela complexes in Rio, Complexo da Maré. Favela residents from all over the city attended the event to show solidarity and share their experiences as victims of police violence in their communities.

“We ask for your support and solidarity so that in Mexico they realize that there are people all over the continent who support us,” Legideño Vargas told the audience.

The Caravana met with activist groups and community leaders privately first and then participated in a public panel that included four favela residents including Ana Paula de Oliveira from Manguinhos, Vitor Lira from Santa Marta, Monica Cunha from the organization Movimento Moleque, and Irone Maria Santiago from Complexo da Maré.

Oliveira in particular feels a strong connection to the Caravana 43 movement because she has also lost a son to police violence in Rio.

She said: “My fight is necessary, I’m conscious that unfortunately my son won’t come back to me, but I can’t just sit here with arms crossed. I have to fight for my life, for the life of everyone who is here, for the life of every favela, for all youth and residents of favelas. I will continue my journey until I’m able to, until I have health and strength to fight, I will keep going.”

Cunha continued the discussion stressing the importance of educating favela youth to steer their views away from negative social stigma.

Sanchez Nava directed his message to the Brazilian government and asked for justice for the many victims the Caravana had met during their visit to Brazil. He listed more than a dozen names of victims from São Paulo, Porto Alegre, and Rio.

On the morning of June 11, the Caravana visited the Centro Etno-conhecimento Sócio-cultural e Ambiental Cauieré (CESAC) in the North Zone of Rio to have a private meeting with indigenous Guarani peoples: the Teko Haw, Guajajara, Mudurunku, Tupinambas de Olivença, Asháninka, Krenak, Krikati, and Manaua. The event was followed by a visit to a community in the Maracanã neighborhood, where Caravana representatives demanded the return of the 43 Normalistas and justice for Rio’s indigenous populations, who have suffered oppression from the state.

The next morning, about 15 people joined the Caravana to hold a demonstration outside the Mexican Consulate in Rio. Brazilian organizers of the Caravana delivered a letter signed by several organizations and activists to the Consulate General.

Tensions rose during the event when the Consulate General quickly passed out fliers with the official government response to the Ayotzinapa incident and rushed back inside. Disagreeing with some of its statements, Sanchez Nava symbolically ripped the flier in half and threw it at the Mexican Consulate door.

The second event, a debate called “I Think, and Then They Make Me Disappear,” on June 12 took place in Rio’s state university, Universidade do Estado do Rio de Janeiro (UERJ). The objective was to share the experiences and battles for public education in the city of Rio and in Mexico.

Márcia Curi Vaz Galvão, leader of the organization Filhos e Netos por Memória, Verdade, e Justiça (Sons and Grandsons for Memories, Truth and Justice), an organization that raises awareness about the consequences of the Brazilian dictatorship and provides psychological help for family members of victims of the state during the dictatorship, said she could find many similarities between the experiences of Caravana members and members of her organization.

She said: “When I got there and heard Francisco [Sánchez Nava] speak, I thought, ‘But he is saying what I would say.’ It is the same cause, the same America.”

The Caravana concluded their journey through South America with a large event on the steps of Rio’s City Hall. The event gathered about 200 spectators to enjoy Latin American music and speeches from local activist groups.

Galvão’s group spoke during the event and each member of the group symbolically changed their names during the gathering to represent one of the 43 Mexican students.