This is the fourth in a five-part series titled Housing Policy Lessons from Rio’s Favelas. We hope this series will inform debates on housing and favela upgrading and that Rio’s new mayor, Marcelo Crivella, will design policies that address the challenges favelas face while recognizing and strengthening their attributes, by actively engaging with residents in policy design and implementation.

“On the one hand, Minha Casa Minha Vida is OK–the apartments and giving people their own homes. People will have their first regularized home, that is to say, if you live in a favela where you don’t have a property title, you will have it there. People need a decent house that is near transport. However, the housing units are very distant.” – Cabritos, South Zone

Launched in 2009, Minha Casa Minha Vida (MCMV) represents the first large-scale public housing construction by Brazil’s federal government, aimed to dramatically shrink the nation’s housing deficit. Unfortunately the program’s execution has been highly problematic. Though not a scientific sample, only 10% of residents interviewed for this series supported the execution of Minha Casa Minha Vida in Rio, and 20% were unsure. The bulk, 70%, were unhappy with the housing being offered through the program.

“[MCMV] offered housing that Brazil didn’t have for 20 years. There was a huge housing deficit in Brazil. It allowed the city governments to attend to the housing demand with speed. There have been a lot of housing programs recently that were very slow and the outcome was late. However, this program adjusts itself to the manner of the traditional sector that built housing. That is to say, the [construction industry] adapted less to the program and the program adapted more to it.” – Rio de Janeiro Federal University’s Institute of Urban and Regional Planning Research (UFRJ/IPPUR)

Ultimately, Minha Casa Minha Vida was launched as much to boost the nation’s construction sector as it was to provide public housing, establishing mixed incentives which have affected the quality of its roll-out until today.

A major problem with the program’s execution in Rio de Janeiro is that a significant portion of MCMV units have been delivered to people evicted from their homes, often from functional favela housing. Since the intent of the policy was to provide housing to those in need of homes, those units are not reducing the housing deficit and are instead justifying further removals in the city.

“The apartments are tiny and needy families are large. Normally it is one person, a mom, with maybe three kids. These apartments are horrible. They are distant and the worst. I think the idea might be nice, marvelous even, because they do, in fact, need homes. However, I don’t think this answers the problem. You have to understand these apartments are for people and for families.” – Cabritos, South Zone

Further, within the West Zone of the city, there is a large problem with armed militia groups taking over MCMV condominiums and acting as a de facto law enforcement force. The militias extort residents and use intimidation as a tool of opression.

“They are places that have little security, little structure, and it is only a house. They don’t bring infrastructure, basic sanitation or security. Many of these MCMV homes are occupied by militia and the police don’t do anything, the government doesn’t do anything and still knows what is happening. Those places are a land without law.” – Cabritos, South Zone

Public housing built under another program, the Growth Acceleration Program (PAC), in Rocinha, however, shows how housing policy can be used as a way to integrate public housing into the community. This development, which includes public spaces and which is integrated into the fabric of the favela, was built in response to the high tuberculosis rates on Rua 4. The same residents living in this unhealthy zone were those relocated to the new public housing designed to address those public health issues on the same site. Since most of the residents were able to stay in the same community or nearby, the public housing fulfilled its mandate. However, even in this positive example of public housing, residents were already experiencing maintenance and structural issues within the homes soon after construction.

Living in a favela is different than living in an apartment. The rules are different.” – Complexo do Alemão, North Zone

The MCMV condominiums in Triagem are an example of public housing created in a relatively central location with access to transit. Close to the train and metro stations and the city center, the Triagem units show how public housing can be woven into the fabric of the city. However, the 2,240 apartments represent just a tiny fraction of MCMV apartment units in Rio. They are the exception, not the rule.

“[MCMV] homes are built in places that are really far away and wouldn’t be worth it because our lives here are in the South Zone. To go to a place really far away would be a problem. It would mean maybe six hours per day in transit and we don’t want that. It is one of the main reasons we are still in Rocinha.” – Rocinha, South Zone

The problem of execution plagues all MCMV complexes, for example Parque Carioca, the complex where many Vila Autódromo residents were relocated. The City branded Parque Carioca as an optimal public housing complex complete with a pool and happy residents. But when our team returned in 2016 to talk with residents about their experiences, what we found contradicted much of the city’s statements. Residents were upset with an extreme lack of shade, segregated and closed off lots, broken playground and leisure equipment, slowly deteriorating buildings and lack of functional public space. Residents felt like they lost the communal identity of their favela, replaced with a stark, cold apartment complex that does not foster well-being.

“MCMV today in Rio de Janeiro functions through the fact of the people that are being displaced from Vila Autódromo and such. MCMV was meant to be for people that don’t have a home. Today it is being given to those who have homes. This is a huge error for MCMV; it is being used for evictions.” – Asa Branca, West Zone

Another example of public housing that has had negative results is the public housing built in Colônia Juliano Moreira in the West Zone. Numerous apartment complexes have been built in this area given its relative proximity to transit and commerce hubs like Jacarepaguá, Barra da Tijuca and Taquara. The experience of residents in Colônia is mixed. Many are there because they were relocated from the communities like Vila União de Curicica or Ipadu. Although some residents welcome the houses as a positive alternative to their precarious previous housing, there are residents that are angry with the quality of the homes and lack of infrastructure.

The most difficult aspect of these apartments is the cost. Although they were promised an “exchange of keys” for the apartments, the residents still do not have official documentation of ownership and are being pursued by the bank for a debt of up to R$70,000. Beyond this, residents must pay utility bills that are unreasonably high and not adapted to the fact that the residents are in affordable housing. 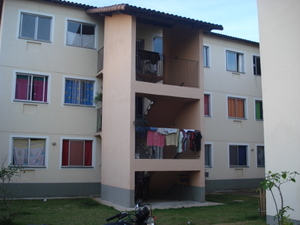 There are significant problems with the physical design of the MCMV units that could be fixed to keep the qualities of favelas by prioritizing walkability, sociability, connectivity and space for resident-owned commercial activities. For example, in Colônia, there are also affordable homes created through the Favela-Bairro program. In contrast to the stark, pale, gated MCMV condominiums, they are small, low-rise homes that resemble the low-rise favelas and encourage greater sociability. The MCMV units that are separated by large chain link fences have large parking lots and forbid commercial activities. The design did not contemplate integrating positive aspects of favela design that support residents’ development.

“The people who got [MCMV homes] didn’t need them. Those who rent were never able to get anything. This program is very, very, very poorly done.” – City of God, West Zone

Minha Casa Minha Vida does have parts that are positive. Aside from being an important national policy supporting large-scale housing production, the portion dedicated to the Minha Casa Minha Vida-Entidades program is critical to allowing self-built homes. This portion of the program should be made larger. Currently only 5-7% of the funding is given to this type of construction..

“Minha Casa Minha Vida produces peripheries. It builds housing in places without infrastructure and in my opinion this is a very negative aspect. A positive aspect that should be increased is the component that social movements lobbied for called Minha Casa Minha Vida-Entidades. With this you diminish the rules of the market a little and residents have control over construction.” – UFRJ/IPPUR