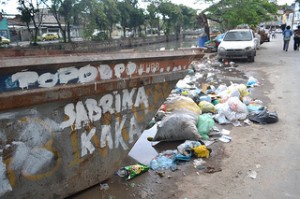 A legacy of government neglect peeked through the joyful motions and colors of the traditional Festa Junina in Pica-Pau, Cordovil last month. The lack of public investment was most visible in descending houses, in a creek that stewed with the smell of sewerage, in informal water and electricity lines that snaked densely above and below. But one of the most toxic issues is represented by quieter exchanges of drugs on unpoliced corners. That afternoon in late June, the leaders of the Residents’ Association and Ministério Semear de Bras de Pina presented to us the tolls of drug abuse in their community, and their recent attempt to combat it.

With children comprising half of Pica-Pau’s population, the brunt of this damage hits residents at the height of youth, potential and vulnerability. Irenaldo Honorio da Silva, President of the Residents’ Association of Pica-Pau, told us of an 8 year-old prostitute selling her body on the streets to pay for crack, and of the community’s HIV infection rate for people aged below 18 ranking among the highest in the city.

The Residents’ Association of Pica-Pau and the Ministério Semear de Bras de Pina have initiated a recuperation program to reclaim the lives of those caught in the tangles of drug addiction. With the support of community members, the program has identified and placed 40 at-risk addicts in a rehabilitation center in the distant neighborhood of Campo Grande, separate from their vices and steps forward on the road to recovery. 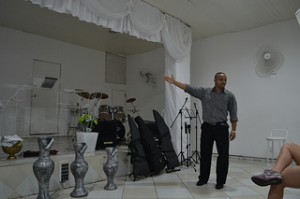 But, as Deacon Sebastião informed us, the Pica-Pau recuperation project has committed to doing more than just send residents to be rehabilitated elsewhere. From the very beginning, the process emphasizes dialogue. Friends and family come together to stage an intervention, creating a space where feelings are aired and a stronger sense of understanding built in place of once-hushed concerns. And throughout the rehabilitation period, members of the family and church pay regular visits.  In a community as tightly knit as Pica-Pau, such dialogue is key to positive change: “The relationships that people form here have an incredible influence over the decisions they make,” said one resident. “It’s all we know. There’s nothing else.”

When asked who he thought was to blame for the issues his community faced, Irenaldo replied that it was “half the residents, half the government – and the government, most fundamentally.” Though both sides of the drug exchange are acted out by residents of the favela, their decisions are fueled by social forces beyond their control, by the lack of conditions required for every individual to flourish. 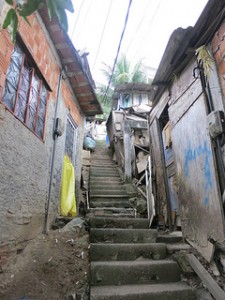 “People are ill-equipped to tackle the challenges and take advantage of the opportunities in front of them,” he said. “They graduate from school without really learning how to write. They spell estágio (internship) with a ‘j’ on their applications. And there are stigmas. They say that in Brazil, there’s no prejudice, but there is prejudice. In the middle of it all, it’s easy to feel powerless.” It’s this sense of inefficacy that powers many a drug addiction.

But leaders of the Associação and the Ministério fight to be agents of change in their environment. For the past five years, they’ve offered information technology courses to community members and distributed bread and soup to the least privileged in the area, among other projects.  Still a young partnership, their eyes are set on the future.  In addition to the continuation of the recuperation project, Irenaldo told us of plans to open a music program providing instruments and instruction for Pica-Pau’s youth, as well as a mutirão (collective action) to clean up some of the community’s dirtiest areas, scheduled for August 25th. The main obstacle for the music program, says Irenaldo, is lack of resources. “We have many willing professors,” he says, “but not enough money to buy instruments for the number of children we want to serve.”

The same problem of scale is also present in the recuperation project. “We tried to reach out to the other eleven churches in the area,” Pastor Sidney told us, “but they hesitated to invest their time in a project that came with so little compensation or support.” But not even the full force of the eleven churches could expand the project to support every at-risk youth in the region, much less begin to tackle the structural roots of their situations. 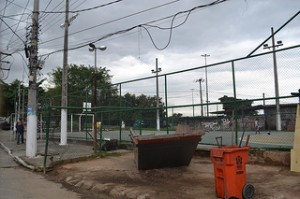 On this note, we were greeted by City workers renovating a sidewalk for the city’s Bairro Maravilha (Marvelous Neighborhood) project. “This project is only for the roads and sidewalks entering the neighborhood,” Irenaldo explained, “more for the people living outside Pica-Pau than those within. But over the next year, we’ll be talking to government officials in order to form a more complete series of interventions within the community.”

These upcoming works, part of Morar Carioca, a City project intended to urbanize all of Rio’s favelas by 2020, could hold some of the structural solutions that residents of Pica-Pau have long awaited – but only as long as rounds of dialogue between residents and government live up to their participatory ideal. 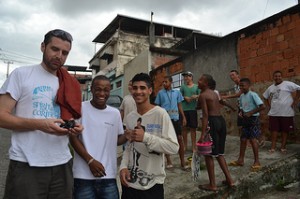 Inching towards the crossroads of this uncertain promise, the energy that pulsed through Pica Pau during all three of my visits was overall positive. Children ambushed us with song and dance on sparse alleyways. Residents were warm and inviting at our introduction, pressing us to stay for the night’s festivities and quizzing us on our impressions of the community under the bright palette of flags tied tight across rooftops. “There are good things and bad things here,” one resident told us, “good people and bad people. But the good people make this an incredible place to live.”