On April 13, the first Forum on Basic Sanitation in Maré took place at the Herbert Vianna Municipal Cultural Center with the objective of collectively creating effective public policy proposals to address issues of sewage, waste management, health, and water supply in the community. The event was organized by data_labe, a laboratory of data and narratives in the Maré favelas, in partnership with Redes de Desenvolvimento da Maré (Maré Development Networks NGO) and Casa Fluminense with the support of the CASA Socio-Environmental Fund.

Two inspiring stories were shared during the opening panel titled “Sanitation in Maré: Experiences and Solutions.” One was the experience of trash collector Valdenise Brandão, who is from Belford Roxo (in the Baixada Fluminense) but works in Maré. In addition to her work at COMLURB, Rio’s municipal waste collection utility, she also develops her own projects—including creating sustainable gardens in public squares, cleaning Piscinão do Ramos (a large artificial lake nearby), and recycling objects found in the trash. “Society has a great responsibility to help us with sustainability projects. We have to deconstruct this idea that we’re working for other people. I, for example, work to clean the streets for my own benefit too. There’s an immense wealth to be found in waste that not everyone is aware of, not even the government itself,” stated Brandão.

The other story was that of Cris dos Prazeres, founder of the group Prevenção Realizada com Organização e Amor–PROA (“Prevention Realized with Organization and Love”), who works on issues related to health in Morro dos Prazeres. She discussed the role of trash as a threat to residents’ health and recounted that beyond the proliferation of disease, the accumulation of uncollected waste on a hillside contributed to a landslide that killed over thirty people in Prazeres in 2010. Following the tragedy, residents came together to map the presence of dumping sites and associated risks, eventually giving way to the creation of ReciclAção (“RecyclAction”), an environmental education and recycling project.

During the panel, Ana Lúcia Britto—a researcher at the Laboratory of Studies on Urban Waters (LEAU) and professor at the Federal University of Rio de Janeiro (UFRJ)—also presented a historical panorama of sewage in Rio de Janeiro and the challenges involved, taking into consideration the Basic Sanitation Regulatory Framework and the National Sanitation Plan. According to Britto, investments in water supply and sanitation systems in difficult-to-access areas are not prioritized by the government. As such, the right to water and sanitation guaranteed by the United Nations, broadly conceived, is not fulfilled. As a result, one detrimental effect is the recurrence of diseases linked to the lack of basic sanitation in Rio’s favelas.

Britto also clarified the distribution of responsibilities: the State Water and Sewerage Utility (CEDAE) is responsible for water supply and sewage systems in favelas with Pacifying Police Units (UPPs) and in the formal city; City Hall is responsible for favelas without UPPs; waste collection is carried out by COMLURB and urban drainage by the Rio de Janeiro Municipal Water Institute Foundation (Rio-Águas). In practice, this division between favelas and the formal city and between favelas with and without UPPs opens up loopholes for responsible parties to shirk their responsibilities. In response to a request made by data_labe via the Access to Information Law (LAI), the City said that “the community of Maré is one of the [favelas] where UPPs have been installed and therefore inquiries concerning sewage should be directed to CEDAE”—but there have never been UPPs in Maré.

“I see how peripheral areas are not viewed as parts of the city and how violence is used as a justification for authorities to not invest in what is truly needed,” commented Joelma Sousa, a resident of Maré and a tutor in the Heroes Against Dengue project.

Following the panel, data_labe presented the results of CocôZap, the pilot project created in partnership with Casa Fluminense that generated the idea for the forum. Through a WhatsApp number, the project receives and systematizes photos and locations of accumulated trash. The pilot project was carried out in the favelas of Nova Holanda, Parque Maré, and Parque União—three of the sixteen favelas that compose Complexo da Maré—but Gilberto Viera, who works with data_labe, emphasized the importance of the project’s continuity and expansion: “It needs to continue to exist in other favelas and, who knows, maybe beyond,” he said.

CocôZap served as a channel for reporting and discussing the issue of trash accumulation with the participation of people seeking solutions to problems related to waste and sewage treatment. Four young residents participating in the project received technical training in data journalism and mapped trash collection and the sanitation situation with the support of the Eco Maré Collective. In addition to developing a mobilization plan, they also produced an investigative report on the topic. 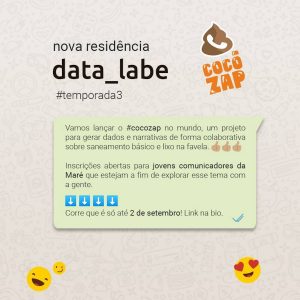 “What was most impressive during my experience in the streets was realizing that residents are aware of waste and sewage. Little by little, they take small actions together with their neighbors and keep the streets clean for children to play,” recounted Gabrielle Vidal, a resident of Nova Holanda, on the project’s blog.

The project lasted two months and encouraged residents’ participation by inviting them to share the water and sewage problems present in their daily lives. The project used the WhatsApp number +55 (21) 9995-7216. In total, the line received 25 notifications—fourteen related to sewage and eleven related to the trash situation. The most active participants were residents of Nova Holanda.

Next, João Pedro Martins and Vitor Mihessen from Casa Fluminense’s information coordination team presented the institution’s work based on the Rio Agenda 2030, which was distributed at the event. The goal was primarily to discuss Theme 5 of the Agenda, which sets forth five proposals concerning basic sanitation and the Guanabara Bay:

After, Hélio Euclides, a resident and journalist at community newspaper Maré de Notícias, led a workshop to create a timeline of Maré’s history—from when houses stood on stilts to present day—based on articles on the topic of sanitation. Simultaneously, the founder of the Graffiti Museum, André Carlos do Nascimento, led a workshop with children, transforming old tires into animals and cartoon characters. Finally, resident and musician Bhega Silva made rounds on his bicycle collecting used cooking oil.

The issues raised during these initial discussions encouraged various project leaders present at the event to put forward their local needs and possible global solutions to the problems that affect the population’s quality of life in general—for example, rethinking trash collection and environmental public policies both within and outside of affected areas. In addition to the aforementioned projects—CocôZap, ReciclAção, and the Graffiti Museum—also present were EcoMaré, Onda Verde, Catalytic Communities* with the Sustainable Favela Network, along with technical allies who are part of the Engineers without Borders network and the Environment in Motion Institute.

The discussion then gave way to working groups with the goal of devising solutions to local issues. The working groups were divided according to four topics: 1) Trash and public security; 2) Health and wellbeing; 3) Water supply and rainwater management; and 4) Sewage and the Guanabara Bay. The groups featured the participation of researchers on the topic, favela residents, participants in socio-environmental projects, students, and some public servants who work with sanitation and waste.

There was good reason for the choice of venue. From the location where the event was held, it was possible to understand how waste is produced in surrounding areas and thus devise solutions and plan direct actions. Attendees participated in a planting mutirão, a collective action project, led by the Eco Maré Collective—a group that works to raise environmental awareness by promoting discussion circles and mobilization activities. Juliana Machado, an educator and member of Eco Maré, recounted: “We realized that we had to do more than just revitalize spaces; we had to work with residents. From there, we started to promote discussion circles with youth and playful environmental education activities with children.”

The next step is the creation of a charter to construct a permanent forum and an agenda on basic sanitation for Maré, in addition to promoting mobilization such to encourage residents to discuss solutions and demand more effective actions from public authorities.

Community journalist Thaís Cavalcante was born and raised in Nova Holanda, one of Maré’s favelas. While working as a community communicator in Maré, she decided to study journalism in college and believes in the power of information to change the local reality for the better.