The Sustainable Favela Network (SFN) is a project of Catalytic Communities (CatComm)* designed to build and reinforce solidarity networks, bring visibility and develop joint actions to support the expansion of community-based initiatives that strengthen environmental sustainability and social resilience in favelas across the Rio de Janeiro Metropolitan Region. The project began with the 2012 film Favela as a Sustainable Model, followed in 2017 by the mapping of 111 sustainability initiatives and the publication of a final report analyzing the results.

In 2018, the project organized intimate on-site exchanges among eight of the oldest and most established organizations that were mapped in the Sustainable Favela Network, followed by a full-day exchange with the entire network that took place on November 10, 2018. Watch the video that accompanies the exchanges featured in the 2018 series by clicking here.

In 2019, the project is organizing the second round of on-site exchanges—this time open to both SFN members and the general public alike—at projects based in Babilônia, Camorim, Pavuna, Vila Kennedy and Manguinhos. This fourth exchange of the year had participants visit the Kennedy Brothers Community Center (CCIK) in the Vila Kennedy favela. The exchange kicked off with a weekly community yoga class, followed by introductions from community organizers and a presentation on the history of Vila Kennedy by local historian Alex Belchior. The afternoon saw participants split into groups for newspaper basket-weaving and gardening workshops before reuniting for a self-care capacity-building circle led by CatComm director Theresa Williamson. All SFN exchanges are supported by the Heinrich Böll Foundation Brazil.

On the morning of Saturday, September 14, 42 people came together at The Kennedy Brothers Community Center (CCIK) in Vila Kennedy, in Rio de Janeiro’s West Zone, for the fourth Sustainable Favela Network exchange of 2019. As a quiet rain fell outside the community center, inside, yoga instructor and Vila Kennedy resident Giorgio Freitas guided a community yoga class. A regular self-care activity at the CCIK, the Saturday morning class saw near-full attendance, and Freitas led nearly 30 local women through the restorative session, encouraged participants to be bold while also respecting their limits in each of the different yoga positions. As members of the Sustainable Favela Network from across the city trickled into the CCIK, they too stretched and strengthened their bodies, and the newly-integrated session came to a close with all participants lying down, closing their eyes, for a final Shavasana exercise.

Verônica Gomes Martins da Silva, president of the CCIK, greeted the day’s now energized participants, followed by Theresa Williamson of Catalytic Communities, Geiza de Andrade Moura of Agentes Ambientais (Environmental Agents, community members trained as part of the Rio city government’s Center for Environmental Education), and Alex Belchior, community historian and tour guide. Williamson explained the Sustainable Favela Network’s purpose, emphasizing the importance of the day’s exchange to the network. Andrade introduced the fundamental work that the Environmental Agents undertake in the community, explaining one of the program’s central campaigns, whose theme is that “poverty is not synonymous with dirty.” The project aims to create a more sustainable community, reducing the level of trash in the streets and introducing additional garbage collection points around the neighborhood, among many other elements.

CCIK celebrated its 50th anniversary this April. It is a hive of activity, and has consistently provided vital support and services to the community. Gomes praised the CCIK’s tireless volunteers as “beacons of light for Vila Kennedy,” which, due to a lack of public sector support—save for in the form of police intervention and military occupation—step in where the State is absent, carrying out social projects to improve, empower, and provide opportunities for the community. The center offers a range of services, from therapy to assistance with college entrance exams. Above all, though, the center is a place for residents to simply stop, take a break, and catch their breath.

Connecting with the Community’s History

Kicking off the day’s activities, Belchior introduced his work in compiling a comprehensive history of Vila Kennedy (accessible to all at www.vilakennedy.com) and went on to explain the neighborhood’s origins. Vila Kennedy, constructed under the mandate of Rio (then the State of Guanabara) Governor Carlos Lacerda, sprouted from Cold War era assistance from the US under President John F. Kennedy’s Alliance for Progress program. Founded in 1964 as Brazil’s first planned community—formerly an orange grove, according to Belchior—Vila Kennedy was intended to house the evicted residents of Favela do Esqueleto, near the Maracanã stadium, whose homes had been demolished to make way for the construction of the State University of Rio de Janeiro (UERJ).

Belchior, a resident of Vila Kennedy for 46 years, emphasized that just as important as the neighborhood’s documented history was, that residents’ connection to the community’s history was equally vital. He asked local participants if they knew their family’s histories, especially in regard to how they came to live in Vila Kennedy. Some described their families having no say in how they arrived, having been forced to move after being evicted from other favelas. Others, however, came out of choice, drawn to Vila Kennedy by its early-on planned facilities, such as medical posts, supermarkets, and schools.

As residents exchanged stories and recognized their similarities, community pride surged. Participants were full of ideas, such as instituting regular community meetings and bringing old photographs to help Belchior create a fuller picture of the history of the favela and its people.

“I do it out of love,” said Belchior, an amazing storyteller, when asked about the purpose behind his work. His long-term project of collecting stories from residents, researching, and archiving the community’s history, is more than a hobby: Belchior believes that if people understand their community’s history, they will begin to see where they live differently, feel more connected, and move towards creating a collective identity of proud residents. He hopes to portray Vila Kennedy as more than an area afflicted by violence. Rather, as a place that “has history and memories.” Belchior encouraged residents to continue to explore their family’s histories in the community and to remember the battles the first residents of Vila Kennedy faced in making the neighborhood what it is today.

Participants in the conversation agreed that documenting a community’s memories and stories is essential, and a fundamental element in engaging residents in community sustainability efforts. A sense of history and pride in one’s place is what drives the sense of belonging that in turn engages residents in improving their communities and engaging with its outcomes.

Following a delicious zero-waste lunch prepared by volunteers in the CCIK kitchen, participants split into two groups and dove into the afternoon’s workshops, run by the community’s Environmental Agents. Geiza de Andrade led one group through a sustainable newspaper basket-weaving workshop, while Nair Romão took a second group outside to a planting workshop in CCIK’s garden.

At the sustainable crafts workshop, Andrade showed participants how to create their own baskets out of recycled materials: using rolled-up magazines and newspaper pages, Andrade stuck the carefully prepared paper tubes to a cardboard base using glue. The tubes were then layered one by one on each side, interlacing to create a spiraling square basket. The end products were sturdy, beautiful baskets of various sizes. Andrade explained that the baskets are one of many products she encourages participants in her Women’s Empowerment group to sell at local markets and fairs.

Participants also had a chance to exchange ideas on how to reduce waste in their daily lives. Andrade explained ways in which residents can not only reduce waste and consumption of disposable plastics, but also save money by using homemade crafts for events like children’s birthday parties. Andrade dispelled the myth of it being ‘easier’ to simply buy a whole load of disposable materials for such events.

On the theme of environmental responsibility and sustainability, the conversation moved on to the importance of reforestation, work which is championed by the Environmental Agents in Vila Kennedy. Andrade highlighted the benefits of reforestation, as natural anti-flood barriers and in bringing improved air quality, referencing the successful reforestation which took place in the Babilônia favela in 1995, which led to a noticeable improvement in air quality a decade later. In fact, it was due to reforestation projects that the craft-making workshops came to be. Some areas that were to be reforested were full of trash, so the Environmental Agents began by talking to residents and analyzing the content of the trash. They realized that much of the waste was the result of discarded newspapers and magazines and developed an alternative destination for this material: crafts that residents could then sell and generate income with.

Outside in CCIK’s vegetable garden, Nair Romão from the Environmental Agents led participants in a gardening workshop. As the group gathered around, ready to get their hands dirty, Romão gave advice on how to prepare and water the soil. Collectively, the group planted spinach and cilantro, and some residents took seeds with them to plant at home. There are future plans to have a suspended garden made using recycled plastic bottles.

For the final session of the day, participants once again came together in a circle, this time to discuss self-care and mental health. Theresa Williamson began, passing out post-it notes and markers, requesting that participants write down the themes, thoughts or feelings that most gave them anxiety. As the responses were collected and read out one-by-one,  participants were prompted to raise their hands if they too felt, or had felt, anxiety in the varying situations. Many hands shot up surrounding themes related to money and employment. The floor then opened up to a frank discussion where participants were free to share experiences or give advice. They explored what having financial issues means to the people of the community, and how the economic system we live in causes a need for money that is sometimes dissociated from the pursuit of life quality.

Aline Barcellos da Cruz from the Sepetiba Ecomuseum, located in Rio’s West Zone, then led the group in an interactive activity involving balloons and music. Each participant had their own balloon and was asked to keep it in the air, alternating from hand to hand. Barcellos explained that the balloons represented each individual’s life and responsibilities, and the challenges of keeping the balance. Everyone was then encouraged to think of how we try to help others with their lives and responsibilities, and how without keeping our own balance and respecting our own limits, we are unable to help others. Returning to the circle as the exercise came to an end, Marcella Vieira from the Reciclação program in Morro dos Prazeres, mentioned the practice of Nonviolent Communication as a means of self-care, and others also stressed how self-awareness and healthy interpersonal communications are key to well-being.

The self-care session ended with a guided meditation session, led by US-born Adam Newman. Newman, the creator of Favela Inc., moved to Rio seven years ago and has lived in the Vidigal favela for the past five. He explained that he moved to Rio for love of the culture, but also in search of a simpler, more balanced life. Newman invited the group to share their life priorities one by one. As responses like love, service, and family repeated themselves around the room, participants were encouraged to think about finding balance and discovering themselves on the path to achieving these priorities. The activity closed with a six-stage guided meditation session. As the session closed, participants stood, joined hands, and, in homage to the spirit of the day and the community of Vila Kennedy, shared their gratitude, making for a beautiful finish to an inspiring day.

There is still time to participate in the Sustainable Favela Network’s final exchange of 2019! The fifth and final exchange of the year will take place this Sunday September 29 in Manguinhos, hosted by Network member organizations Hadasha’s Workshop and Green Roof Favela. Sign up here or contact the network by email at rede@favelasustentavel.org to find out more.

Check out our full album of the day’s events (or click here): 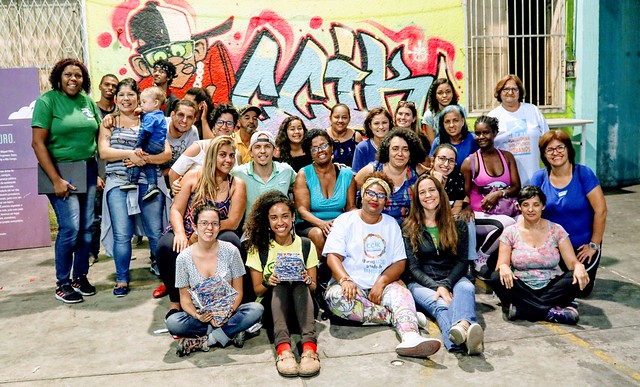