This is our latest article on the Covid-19 and its impact on the favelas and part of our series covering 2020’s Black July.

As part of 2020’s 5th Annual Black July, a group of women involved in campaigns for the right to housing hosted an online meeting called Fight for Housing: An Antiracist and Feminist Look at the City. Black July is a Rio de Janeiro-based annual international event denouncing race-based State violence around the world. As soon as the online event started, it was interrupted by a coordinated attack, with an obscene photo and loud music, which forced organizers to change the live transmission to a different platform. This is not the first time that racist and misogynist attacks have been carried out against events like these, which only reaffirms the importance of such online gatherings.

The event continued once the problem had been resolved, and the four women invited to speak shared their experiences and analysis on the theme of housing. The event moderator was Marluce Lopes from the Center for Popular Movements (CMP). She opened the conversation by reminding the audience that the fight for housing is an old one, adding that “it’s not just about fighting for a roof over our heads and a house, but it’s also about the right to the city, and antiracist and feminist struggles. This is our framework.” 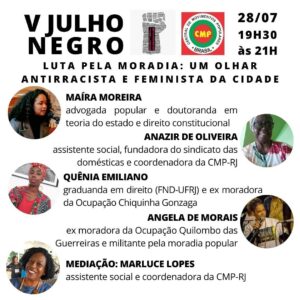 Participants included Anazir Maria de Oliveira, a social worker better known as Dona Zica, who lives in Vila Aliança in Bangu and is a founder of the Rio de Janeiro Domestic Workers’ Union and a coordinator of the Rio de Janeiro branch of the CMP; Angela de Morais, an activist for social housing and other causes who used to live in the Quilombo das Guerreiras occupation and is a member of the Quilombo da Gamboa; Maíra Moreira, a lawyer who is currently doing a PhD in the Theory of the State and Constitutional Law at the Catholic University of Rio (PUC-Rio); and Quênia Emiliano, a law student at the Federal University of Rio de Janeiro (UFRJ) and former resident of the Chiquinha Gonzaga Occupation.

Dona Zica was the first to speak, and she shared her experience of forced removals and other difficulties over more than six decades of community organizing. In the 1960s, during one of the forced evictions she faced, she was eight months pregnant. “Poor people want a decent place to live and when we achieve this, we do everything we can to improve it; this is what happened with us during the 11 years in which we lived in Penha.” Penha was the last place her family lived before they faced yet another removal, after which they moved to Vila Aliança in Bangu, where they are still living now.

Moving to Vila Aliança was the first time the family lived in a brick house, which was still not fully built, but did have plumbing, something that the family had not yet experienced. However, the family’s happiness did not last long. “We started to notice that it wasn’t as marvelous as we had first thought. The only public service that we had access to was water and electricity in the houses. Streets weren’t paved or lit. There were no schools for our children, and there was no public transport. We had nothing. When one of our children got sick, it meant making a huge sacrifice as a family,” Dona Zica said.

The solution to this was to get organized as a community, mostly as mothers and women. “When we started our residents’ association our first demand was for a school, which we succeeded in getting. Then it was asphalt for the roads and street lighting. The most difficult thing was public transport: it took 15 years for us to get a bus linking the community to Rio’s downtown Centro.”

After Dona Zica, Maíra Moreira spoke, as a lawyer providing a historical mapping of the issue of housing, reminding the audience that it is impossible not to associate the issue of housing with slavery and policies aimed at wiping the poor from certain areas. “We have to link this issue to the process by which Brazilian society was formed. This racist project started with the idea of subjugating black people and was based in laws, either through policies that incentivized European immigration with the direct aim of promoting the whitening of the Brazilian population, or through a series of policies that were created to prevent the black population from having access to land.” She continued: “The 1850 Land Law (Lei de Terras) aimed to commercialize land, which could then only be acquired through purchase and not through usage and possession, through having a continuous relationship with a piece of land. Slavery in Brazil lasted almost four centuries, and the black population did not have guaranteed access to land.”

Speaking on the same theme, Morais added that “the abolition of slavery did not happen through the Lei Áurea (the ‘Golden Law’ of 1888). It wasn’t Princess Isabel who gave black people their freedom, it was thanks to black people themselves who were already fighting against slavery, and it was obvious that this fight would end in abolition. The 1850 Land Law happened before May 13 (the day that slavery was abolished), but on May 14, people were there, without housing, without a home, without a right to the city and the right to work, trapped,” she said.

The racist legacy continued in the 20th century and still reverberates today, even after the 1988 Constitution was enacted, which increased some basic rights. Emiliano reinforced this argument: “Article 182 of the Constitution says that governments have to guarantee the well-being of their citizens, but when we stop to think about it, which citizens are these? Not poor people, not black people. If we look at Copacabana, in Rio’s wealthy South Zone, there’s good quality bus provision, there’s asphalt on the streets, there are bicycle lanes, everything that residents need. The Constitution says that we are all equal, but this depends on your skin color and your social class.”

Moreira gave another example. “In a study that we carried out with the Metropolis Observatory between 2017 and 2018, it was obvious that there was a project of suppressing the black population in Rio de Janeiro’s Centro too. The Centro was treated like a place where black people needed to be removed in order for the city to show itself as a capitalist city in the process of modernization. The destruction of the cortiços (tenement housing) in the Centro is another example of this. The aim behind the urban reform projects that took place at the beginning of the 20th century was to target the black population who were working on the margins of the factory towns (vilas operárias). By the 1970s, we had policies with the objective of transforming Rio’s Centro into a non-residential area. This is a city that was built through policies of removal,” said the lawyer.

Throughout the live event, the participants reinforced the importance of understanding how we got to the current situation as well as reflecting on this present. “Denouncing the genocide of black people should be everyone’s job, not just black people’s… Racism is a white problem and white people have to know how to deal with it [too]. We talk a lot about the Mothers of the Plaza de Mayo, in Argentina, but many people forget the Mothers of Acari (Acari was the scene of notorious police massacre in the early 1990s). We have to make people from the casa grande feel uncomfortable,” Morais said (referring to the term for a slave-owner’s residence).

Emiliano shared a scene that she witnessed in Copacabana that demonstrates the daily and structural racism that is present in Brazilian society. “I saw a bus on which there was a group of black boys, around 14 years old, and they were messing around like teenagers do. A white lady passed by and said out loud, ‘look at the rubbish of our society.’ You see, this kind of thinking is racist, these people [black people] come to understand that our place is not in the city, that we have to be hidden in the periphery. We need to occupy the city in order to transform the reality for black people,” she said.

“During the Covid-19 pandemic we are living through another period of regression. The government continues racist discourse and has brought about a structure of projects that have the main objective of killing or criminalizing the black population,” Moreira claimed. The lawyer exemplified this statement by talking about the lack of government support for groups and families that are fighting for housing and fighting against forced evictions. “We did not see any policies to suspend removals [during the pandemic]. When the Prosecutor’s Office asked the National Justice Council (CNJ) to take a position on the suspension of removals and evictions, the CNJ was silent. It’s in this context that many urban occupations are still at risk of removal and eviction, even during this pandemic context. Historically, the city has a lot of abandoned spaces and the INSS (the National Institute of Social Security) is one of the biggest urban landowners in the country. The government is disobeying one of the fundamental principles of the Constitution: the social function of property,” said Moreira.

“They agreed to kill us, but we agreed not to die,” summarized Lopes, quoting Brazilian writer Conceição Evaristo at the end of the debate, in which she highlighted the importance of the conversation and discussions raised by the participants. Commenting on the attack that took place at the beginning of the event, Marcelo Edmundo, one of the organizers, said “I would like to show my indignation about the attack that happened: it was a racist and absurd attack targeting this marvelous roundtable event. They attacked us with hatred, but we will continue in our struggle.”

Dona Zica, matriarch and a role model for several generations of women who are leading the fight for housing, concluded the event: “Who suffers the most? We do. Black women. We realized that we needed things to be improved, we rolled up our sleeves, and we started the fight. We are going to continue to resist.”