Poem on the wall at Museu da Maré

Today, Complexo da Maré is an agglomeration of 16 favelas in Rio de Janeiro’s North Zone, the largest complex of favelas in the city. Its geographical delimitations are defined by the Guanabara Bay and three intersecting highways: Linha Vermelha, Linha Amarela and Avenida Brasil. Home to approximately 130,000 people according to 2010 census data, Maré was officially recognized as a neighborhood in 1994. Though those 130,000 individuals have unique stories and perspectives, the president of CEASM (Maré Center of Solidarity Studies and Actions) Lourenço Cesar da Silva asserts: “There is something universal in the [complex’s] history that runs through all of the communities of Maré.”

Back in the pre-colonial era, this region was a quiet, tranquil place: home to an archipelago of nine islands in the Guanabara Bay where fishermen had resided for over 8,000 years. Their ancestral memories are still reflected in neighborhood names today, like Inhaúma, Timbau and Pinheiro.

In the first half of the 20th century, the Brazilian Estado Novo, the “New State” formed under President Getúlio Vargas, had visionary projects for this wetland: a large industrial ring. In 1946 the highway Variante Rio-Petrópolis, later named Avenida Brasil, was built to improve the connection between the center of the city and its suburbs. This vast endeavor brought many industrial projects to the region creating an industrial zone offering ripe conditions for people to move and inhabit the area.

Both the expansion of the southern region of the city, around Copacabana and Botafogo, and the construction of the Cidade Universitária, a university campus envisioned for an island that didn’t yet exist, demanded a lot of manpower. Between 1949 and 1952, in order to construct that campus, the Fundão archipelago was drained and the original islands were annexed to form what is currently known as Ilha do Fundão, located east of Maré.

Hence, the construction of Avenida Brasil is fundamental to understanding Maré, the way it evolved and the way it appears on the map today. Not only does it indicate one of its geographical boundaries, but more importantly it was the main reason for people to settle in the vicinity and it provided the means for people to get building materials to construct their homes. Avenida Brasil symbolized work and progress. Even today, Avenida Brasil connects many workers and students of Maré to their jobs or universities in the South Zone or city center. The highway is always present in the lives of residents. 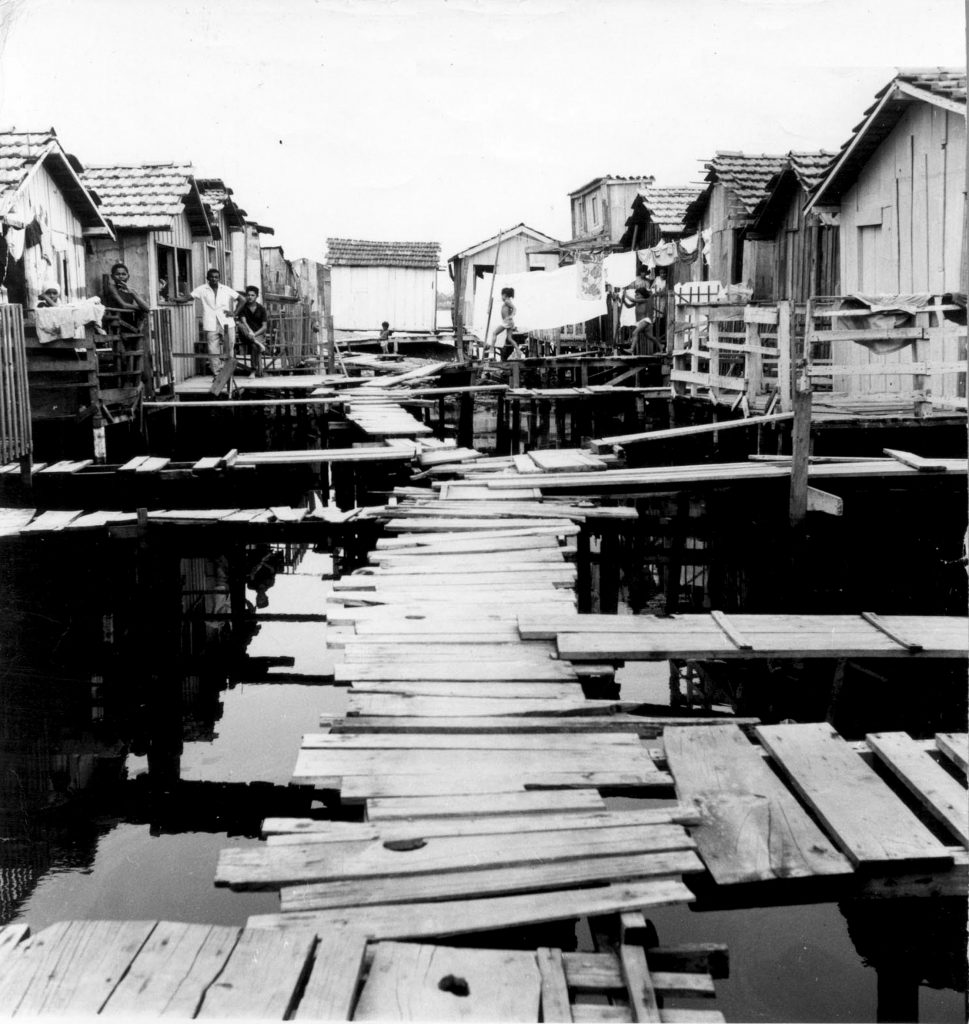 These large industrial projects happened at a time of severe drought in Brazil’s northeastern region. This stimulated an exodus from the rural northeast to the southern cities of Rio and São Paulo. In Maré, these domestic migrants joined local fishermen on the coast. Back then, Morro do Timbau was the only mainland area, surrounded by water and swampland. As migration intensified, people built stilt houses, known as palafitas, on the water, creating the community of Baixa do Sapateiro by 1940.

These communities expanded rapidly during the 1950s and 60s, as more and more stilt houses occupied sandy, shallow banks. The communities of Parque Maré, Parque Rubens Vaz and Parque União began to develop. Those were the days of the rola-rola, crossing the newly built Avenida Brasil with large wooden barrels to get water in Bonsucesso. It was the epoch of the first category of fear according to this article’s opening poem: a time of drowning, gales and storms, rotten wood, and evictions.

The favelization of the area reflects a large national trend of urbanization. Between 1950 and 1991 the percentage of Brazilians living in cities increased from 36.2% to 75.2%. The 1950s and 60s also coincided with modernization projects in the South Zone and large removal processes in favelas. Former president of the Timbau Neighborhood Association Antônio Carlos Pinto Vieira recalls: “From that time, there’s news about the removal process of those residents. Nevertheless it was also a process of resistance. Maré is built on that basis. The oldest Neighborhood Association emerged at that time too. Residents started to form local associations and demanded their rights be respected. The Timbau Neighborhood Association was formed in 1954 and Baixa do Sapateiro’s in 1956 or 1957.”

During the 60s’ military regime, under the authority of governor Carlos Lacerda (1961-1964), a grand modernization project swept through the city. Tunnels, viaducts and parks, concentrated in the South Zone, inaugurated the new postcard image of Rio de Janeiro. Many favelas in the South Zone underwent forced evictions, with residents moving to poorer and more remote areas like Maré. The community Nova Holanda was specifically constructed on a large landfill as a temporary housing project in 1960 to house those evictees. Until the early 80s, these six favelas—Morro do Timbau, Baixa do Sapateiro, Parque Maré, Parque Rubens Vaz, Parque União and Nova Holanda—formed the original configuration of Maré. 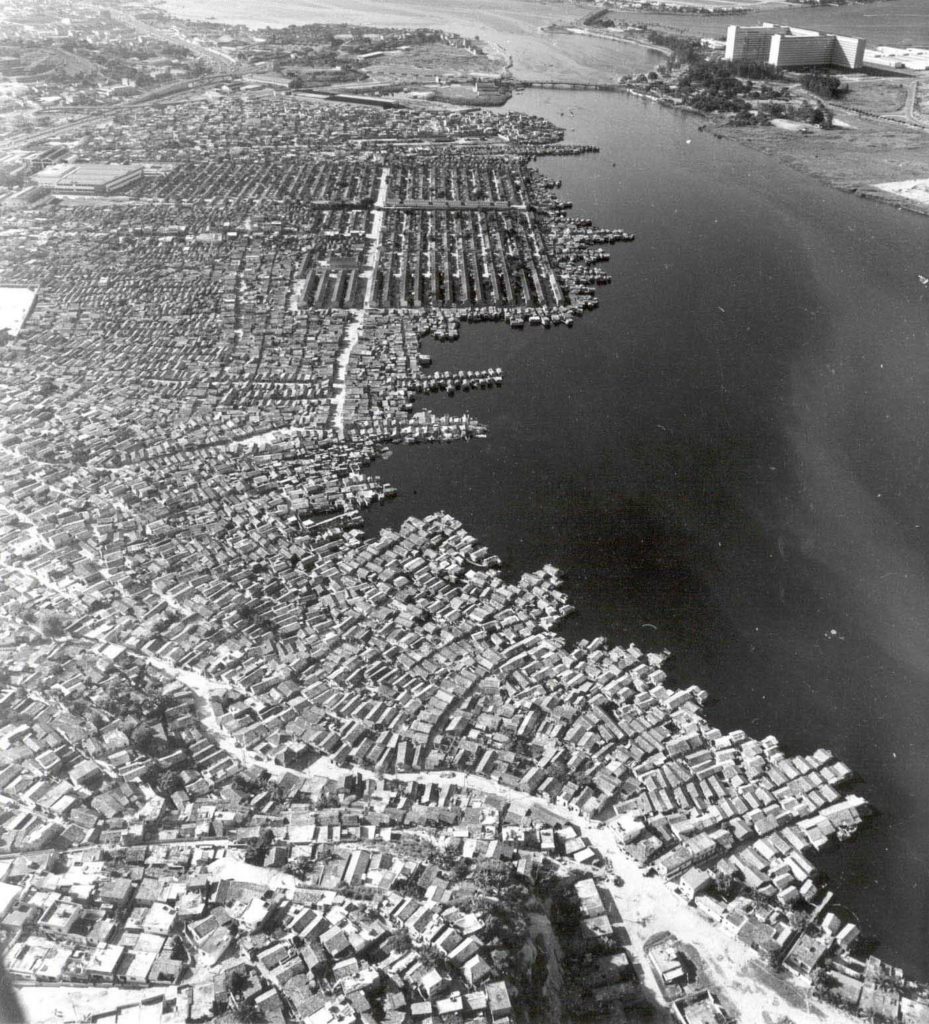 In 1979, during the dictatorship, Project Rio was implemented by the National Housing Bank. This project, established by the Ministry of the Interior, envisioned creating another big landfill in the Guanabara Bay region. This time its focus was not the Fundão archipelago but the communities of Maré itself. The project proposal entailed removing the favelas in Maré and importing a “modern” and “civilized” lifestyle.

The different councils of the communities opposed this threat. The eventual compromise allowed residents to stay in the region but with the palafitas removed. Residents from those shacks were moved to housing complexes on other nearby landfills—Vila do João, Vila do Pinheiro, Conjunto Pinheiro and Conjunto Esperança—which each form one of Maré’s favelas today. One could argue that this housing removal project in fact furthered the growth of favelas.

Some residents today still recall the days when they would walk down the hill of Timbau and then pass streets of stilted houses, or the time when they had to move from Baixa do Sapateiro to Vila do João.

Four new communities were created in the 1980s while Nova Maré was built in the 1990s, when residents were removed from the last palafitas standing on Ramos and Roquette Pinto. Finally, Conjunto Salsa e Merengue was built by the government to house, primarily, residents affected by heavy rains in the 1990s. In 1994, the City of Rio officially declared Bairro da Maré to be the 30th administrative region of Rio de Janeiro, establishing it as a recognized neighborhood like Rocinha and Complexo do Alemão.

Each community in Maré has its own history, yet the narrative of communities forming quite literally out of the water, simultaneously through informal and formal processes, and welding into the existing favela complex, shapes a shared unique narrative for the neighborhood at large. A gradual process of urban consolidation spanning over 80 years does not hide the heterogeneities, complexities and identities working within this vast district. However, faced with processes of military occupation and police interventions, this historic diversity is suspended in the voice of resistance. The universal element which binds Maré, apart from its geography, and ties it to other favelas, is the right to resist and the claim for a voice.

Simon Marijsse is pursuing an Advanced Masters degree in Conflict and Development at Ghent University, conducting ethnographic research on contemporary religious narratives and changes. He is Editor for International Affairs for Politheor: European Policy Network.