Last Tuesday, the Coletivo Nuvem Negra (Black Cloud Collective) of Rio’s Pontifical Catholic University (PUC-Rio) and the Institute of International Relations at PUC-Rio hosted a roundtable debate on whiteness and the university experience, a discussion that included adjunct professor Lourenço Cardoso of the University for International Integration of the Afro-Brazilian Lusophony. On Wednesday and Thursday, Professor Cardoso was brought back in a heightened role to provide a more in-depth mini-course on white identity using historical examples, personal research, and race theory. Cardoso himself studied history as an undergraduate at the Pontifical Catholic University of São Paulo (PUC-SP), and later focused his post-graduate research on white academic researchers studying black subjects. On both days of the mini-course, lectures were followed by a period of debate and critiques from the audience. 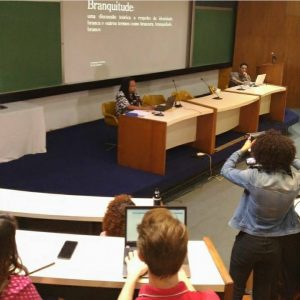 On both Wednesday and Thursday, Professor Cardoso spent well over an hour focusing solely on conceptual terms that he considered critical to understanding whiteness, and upon which conclusions could be reached about future research and activism both within Brazil and on an international scale.

The branco: Cardoso began by explaining the social construction of the branco (the white person) as a product of European colonialism. The white colonizer, “who constructs himself as a person of value” does so by constructing the negro (black) as without value. In this zero-sum relationship, the power of the branco as “the only human or the most human” depends entirely on his suppression of the humanity of the negro.

Historic Branquitude – Building upon the definition of the branco, Cardoso introduced branquitude, which among terms others translates to “whiteness.” Branquitude refers to the power, aesthetic of beauty, and intelligence self-assigned by the branco, as well as “economic and legal privileges” and the ability “to appropriate the territory of others.” For the branco, “Non-brancos are the exceptions that confirm the rule.”

Modern Branquitude and Branquidade – On day two, Cardoso introduced branquidade, using the concept as a contrast to how branquitude has evolved, and explained the large conceptual differences between them. These are concepts originally developed by white academics Edith Piza and Camila Moreira. Following the black-led redefinition of assigned negritude (blackness) as having value, the “modern branco has reconstructed himself” to be conscious of his or her implicit advantages and take up his role as anti-racist. Though modern branquitude has shifted to meet modern negritude and is no longer reliant upon the “devaluing” of the negro, the “advantages” of modern branquitude are as alive as ever.

In contrast, “unconscious brancos” ignore the social question of their whiteness and inhabit branquidade (also translating generally to “whiteness”). As mentioned by Cardoso, the great majority of white individuals today take part in branquidade, and not modern branquitude. Similar variations of these two terms deal with questions of publicity, and the spaces in which the branco chooses to engage in anti-racism.

Implicit Branquitude – Cardoso proposed the use of studies on European ethnic groups within Brazil as a framework to expand research on whiteness. Since this research “problematizes branquitude through the lens of ethnicity,” it offers a look into what Cardoso labels implicit branquitude.

Branco Não-Branco – Cardoso introduced the Branco Não-Branco (non-white white) to refer to the “hierarchy that exists within whites themselves.” The Portuguese and their white Brazilian descendants, in part because of their historical Moor rulers, have often been seen by other white ethnic groups as possessing less branquitude, giving form to what author Paulo Prado called a “sad race.”

Dracula Branco & Narcissus Branco – In his discussions, Cardoso used the metaphor of the Dracula branco, “whose image does not appear in the mirror,” to explain the pattern of the branco avoiding his whiteness. According to the metaphor, he avoids the explicit “white” label, choosing instead to hide in the shadows of other titles like worker, German, or father, for example. The Narcissus Branco, on the other hand, can only bare to look at his own reflection. Cardoso explained that the intersection of these concepts functions well as a lens into the production of history, and how the branco has written historical narratives to center heavily around his own “language, taste, aesthetic, and vision” without outright naming the overwhelming whiteness present.

Branco-Centrismo and Culture – Branco-Centrismo, or white-centrism, is what Cardoso has named the “reinvention of whiteness as the ‘ideal’ standard of humanity.” This idea of a reinvention refers to the historical European tradition of officially labeling non-white, non-European culture as “savage” while glorifying its own monarchies. Drawing a line of continuity to today, Cardoso’s most clear example of branco-centrismo revolved around the success of Brazilian model Gisele Bündchen, who is of German descent. During the 2014 World Cup and 2016 Olympics, Bündchen’s very light skin and European features were put on display to the world by the country as the standard of Brazilian beauty, misrepresenting what the majority of Brazilians actually look like and further perpetuating a racist beauty hierarchy.

Cardoso also noted that branco-centrismo holds a particularly toxic relationship with black culture. In Bahia, where 78% identify as black or brown, the two singers who have attracted the heaviest heavy media attention over the years are Ivete Sangalo and Claudia Leita, both white. Margareth Menezes, an award-winning black singer also from Bahia, “does not receive the same promotion from Brazil as Sangalo and Leite… despite her power and great prominence.” These examples tie to a greater point that Cardoso addressed: while the negro produces many great cultural projects, the branco tends to reap profits that originate from expressions of black culture.

The Brazilian (and American) History of Research on Whiteness

In day one of Cardoso’s mini-course, the professor traced the history of research on whiteness to one author in particular, Alberto Guerreiro Ramos. Cardoso described Guerreiro Ramos as “the pioneer,” whose Social Pathology of the White Brazilian (1955) was a first in calling for the critical study of branquitude. In particular, Cardoso drew attention to the branco’s privilege of seeing and studying the negro without being seen by him, and that “sociological study of the negro [had until then been] an illustration of this privilege.” However, despite his catalyzing role as one of the first voices in the study of whiteness, Guerreiro Ramos has not received widespread attention for his efforts. 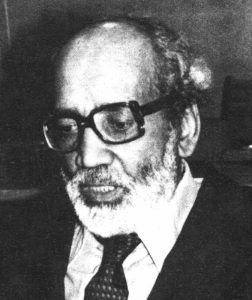 Rather, theory on whiteness stemming from the United States has tended to take the spotlight, perpetuating what Nelson Rodrigues labels a mutt complex within Brazil and “accentuating idealist, non-materialist analysis.” Cardoso also discussed how academics who are themselves white make up a much larger percentage of whiteness researchers in the United States than they do in Brazil. In illustrating these intersections with race and country, the professor wove the study of whiteness studies itself into the fabric of ongoing asymmetric colonial relations.

However, Brazilian studies on whiteness experienced a breakthrough in 2002, when Maria Aparecida da Silva Bento wrote on the “emergency of branquitude” in the Social Psychology of Racism (2002). Since then, Brazil has seen an explosion in the amount research on whiteness. Among those who felt Aparecida da Silva Bento’s influence was Cardoso, who was so inspired by Social Psychology of Racism, that he redirected his prior focus on studies of blackness towards those critical of branquitude.

After being inspired in the early 2000s to redirect his focus towards whiteness, Cardoso decided to focus his post-graduate research on white academics studying the negro. After conducting his interview, the results were clear, and these researchers demonstrated that they had never critically considered their own identity in relation to their subject. Many outright declined to participate in Cardoso’s study, citing various excuses ranging from personal commitment to the appropriateness of the study. In the words of the professor, they felt that they needed “to maintain themselves as scientists.”

Using the branco as a theoretical point of reference, Cardoso stated that the white researchers “did not want to become the object of the negro,” that they were actively avoiding the very same role they had imposed on the negro. Bringing his conclusions to a higher level of analysis, Cardoso discussed how the branco does not consider his own role in research because to the branco, “the ‘problem’ lies with the negro; it’s being non-white, it’s being the object.” The branco doesn’t reflect on his branquitude because whiteness is seen as “the norm, the human, the universal.”

In discussing possible anti-racism action plans to be derived from his field of study, Professor Cardoso looked at two distinct paths forward. In doing so he drew inspiration from Frantz Fanon‘s idea of radical humanization. The first proposal involves “reframing and reconstructing the white racial identity, which, while remaining white, would no longer have racist traces.” The second proposal, meanwhile, posits that whiteness can be deconstructed in the same way that it can be constructed, and that the idea of the white race should be abolished. 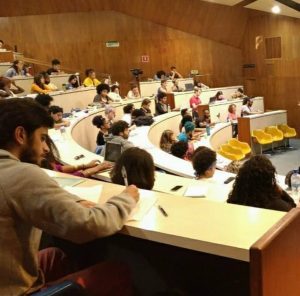 During the first day’s feedback and debate section, Cardoso’s theoretical conclusions drew heavy criticism from some in the crowd at PUC-Rio, who sought a mini-course taking a closer look at institutions and how they continue to perpetuate white supremacy. In particular, the police, the media and the educational system were frequently mentioned as much-needed topics of discussion with regards to whiteness. Several of these critiques received standing ovations by other members of the audience. Moreover, Cardoso’s theoretical thoughts of reconstructing and deconstructing whiteness were characterized as “utopian” by some, and irrelevant by others who preferred to focus on whiteness through a lens of power. The idea of over-categorization was also brought up by some audience members, who felt that a racist is a racist, and that knowing various different labels for the branco “would do nothing to combat his racism.” Others, however, came to the support of Cardoso to say that the branco should be studied rigorously, and that these categorizations were ultimately useful.

The debate section of day two of the mini-course functioned more as a group discussion, as Professor Cardoso opted to take a back-seat approach while members of the audience elaborated on various subtopics amongst themselves. Of particular note was the following question: what is the role of white people in this fight? While some, including Cardoso, believe that white people should be participating in this conversation so they can find a productive and purposeful path, others felt certain that white individuals simply cannot, and will never understand the black experience in Brazil and across the world. Though intense, this discussion resulted in a sentiment of solidarity, with the Coletivo Nuvem Negra introducing themselves at the end of the event to heavy applause from other audience members.