In an increasingly technological world, kite-running remains one of the main sources of entertainment for kids in the favela of City of God, in Rio de Janeiro. With this in mind, on Brazil’s Children’s Day, the Casa Dona Amélia (Dona Amélia’s House) project, in partnership with the Marginal collective, hosted the photography exhibit “Kite Festival: A Child’s Perspective of City of God.” The main objective of the exhibition is to provide a path to rescue the self-esteem of residents of the West Zone favela using the photographic perspective of children on their own community. All photos for this article were taken by children trained in workshops realized by the project. 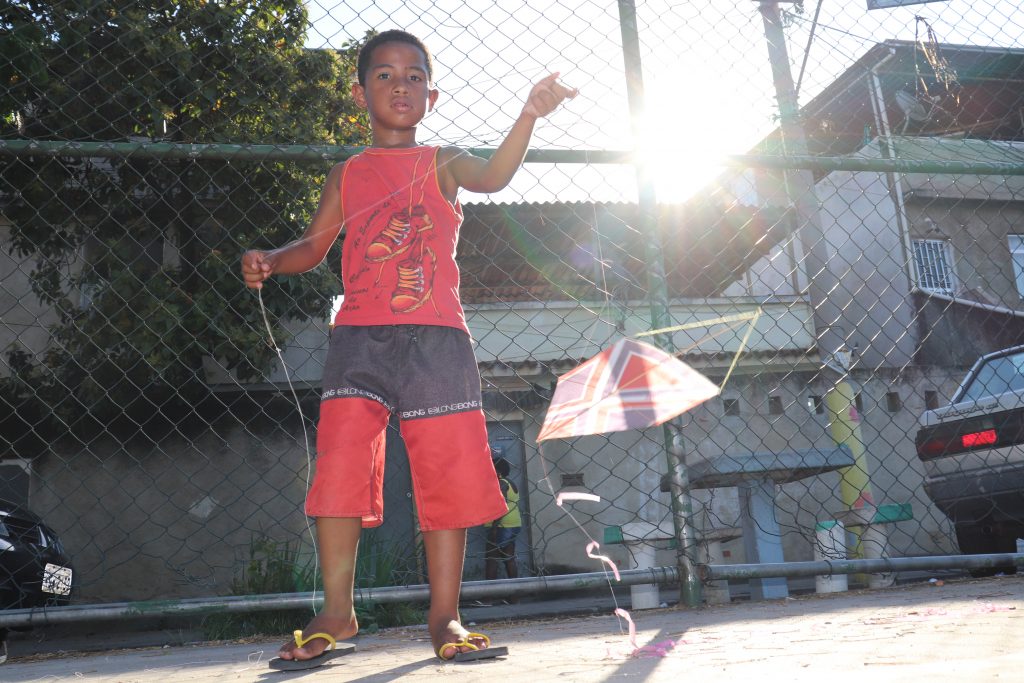 The exhibit’s opening, initially set for September 22, took place only on October 12. The date was symbolic, not only because it was Children’s Day, but also because the original date was canceled out of respect for 8-year old Ágatha Félix, killed just days before. October 12 was also an opportunity to celebrate her joy and childhood.

In addition to the photo exhibit, the event also featured a debate with artists about creative spaces, a free distribution of kites, playtime with local toys, and a sunny afternoon for all those passing by. The photos, which will soon be exhibited in other venues as well, tell a story about the favela to the favela, a story that stands in contrast to the one told in the 2002 movie City of God, which depicted to the world a view of the favela only as a scene of urban violence. 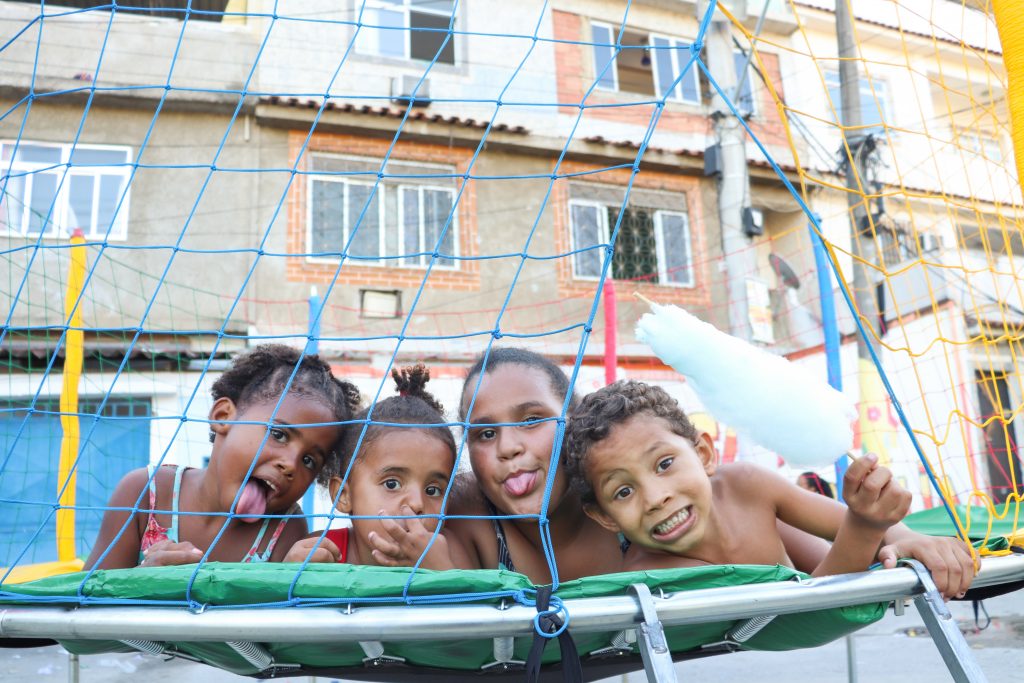 Psychologist Ingrid Siss, who was raised in City of God and often returns to visit her father, is the creator of Casa Dona Amélia. Operating out of Siss’s grandparents’ former home, Casa Dona Amélia emerged as a multi-use space that seeks to empower favelas’ engagement and development by promoting access to information and knowledge in City of God. The project attracts a diverse public of mostly children and their mothers.

Siss says the pleasure she derives from her work is what drives her. “[It’s] allowing residents to discover different activities. The subtlety of the meetings enchants me. More and more, we’re understanding and living this inequality. We’re on the front lines to mitigate the effects [of this inequality],” says Siss. 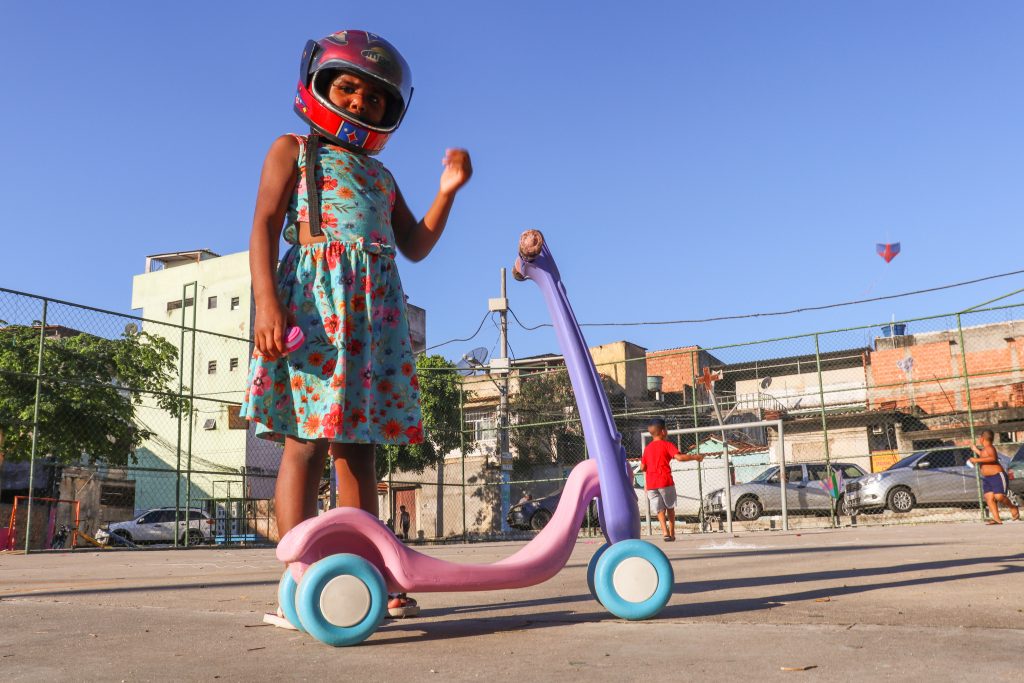 Casa Dona Amélia has no sponsorship, operating solely by donation, its own drive, and grants, such as the recent support received through the NGO Fase. In order to keep up the project’s activities, Ingrid is preparing documentation to turn Casa Dona Amélia into a cultural center. “Casa Dona Amélia already works with culture in different ways, but we still haven’t really taken that on in full. That doesn’t mean that we’ll stop working with mothers, no! Because we understand that culture is the foundation of everything. Education and culture work together. We’ll continue to fly that flag in order to be a place known for its accessibility, its welcoming nature, for education, and the spreading of culture,” Siss dreams.

The Kite Festival’s production process was the result of an artistic and cultural tour, based on the idea of taking children through positive areas of the neighborhood, guided by City of God locals. “In each meeting, the children thought and drew what they felt, with no rules. We undertook a collaborative and creative production process, trying to show what draws attention, what they are able to say about themselves,” says Siss. 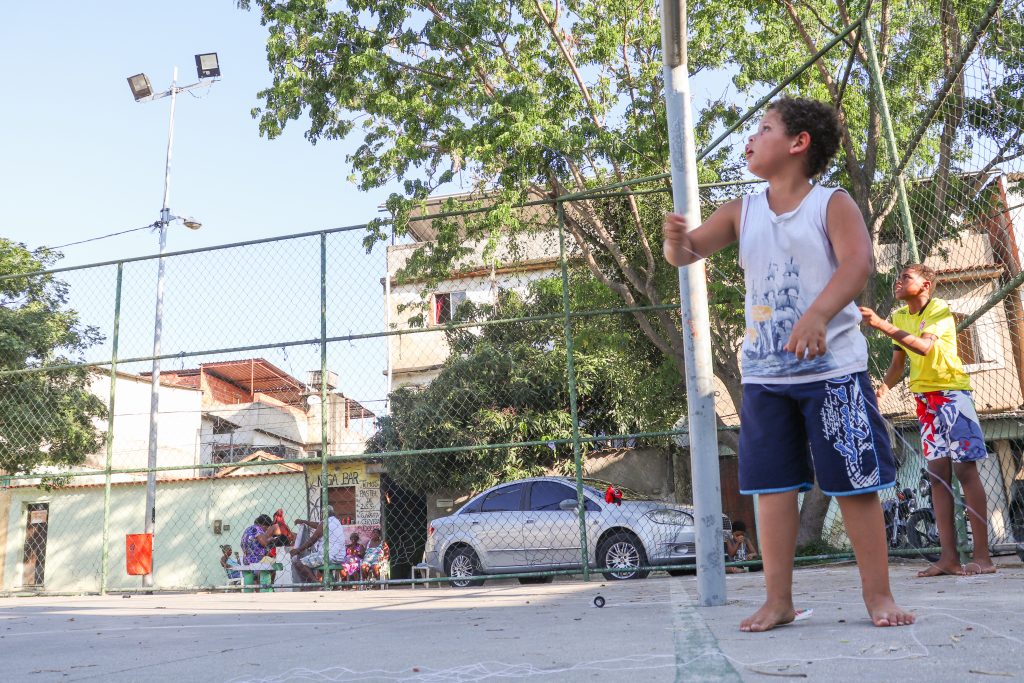 The partnership with Marginal—a City of God communications collective born of the goal of bringing poetry to those who have their rights marginalized—connected Ingrid Siss with André Edgard, a photographer born and raised in City of God and member of Marginal. Edgard worked as an instructor in the workshop that led to the festival. 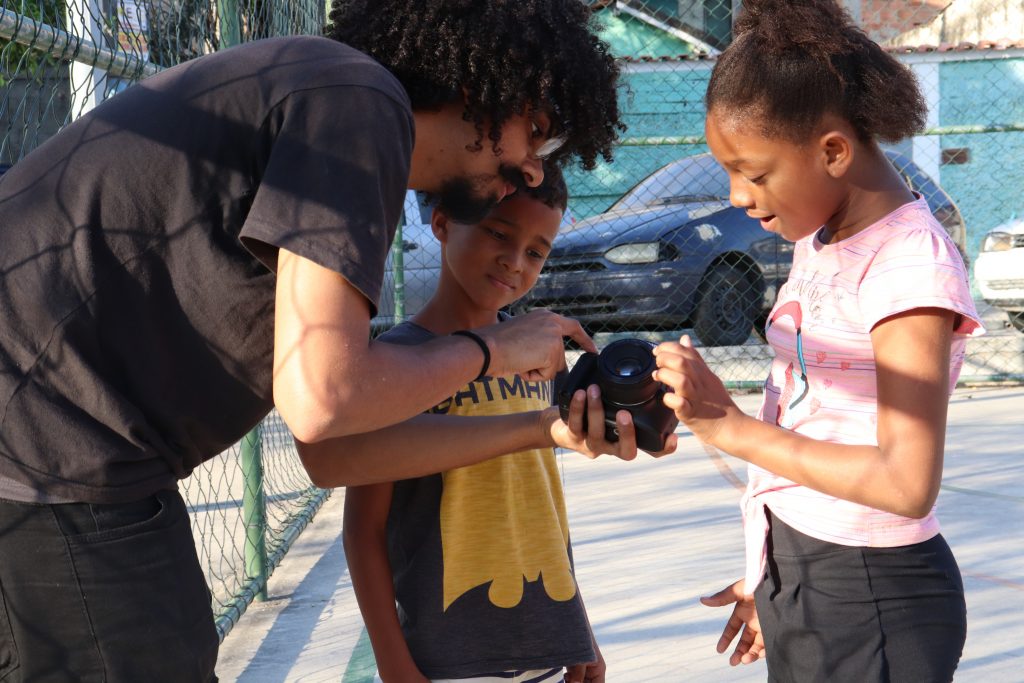 Edgard believes in photography as a tool for social transformation and for collective action: “In a territory that is frequently affected by State violence, which prevents us from going to school, to work, from living our lives… this kind of practice of being with the kids, sharing knowledge and affection, is extremely necessary and urgent. That’s why we value every second we’re together with the children,” he says.

“From the perspective of popular education, the practice of sharing knowledge isn’t restricted to formal spaces. We went to the square in front of Casa Dona Amélia and continued our photography class there. And as we always do in the favelas—when the structures allow the favela to exist without tragic [police] operations—we ended the day sharing another moment of joy with the children, playing a soccer match in the square’s court. And that’s how the afternoon went, full of big smiles, open hearts, and children experiencing something that should never be taken away from them: happiness, the joy of being a child,” says Edgard.

In order to share stories of the favela’s public squares and day-to-day conversations, Marginal has also begun the project Todo dia uma foto da Cidade de Deus (Every day a photo of City of God), that aims to dismantle the violent imaginary surrounding the favela, showing other narratives, empowering marginalized subjects as protagonists of their own stories, revealing the beauty and potential of the favela. 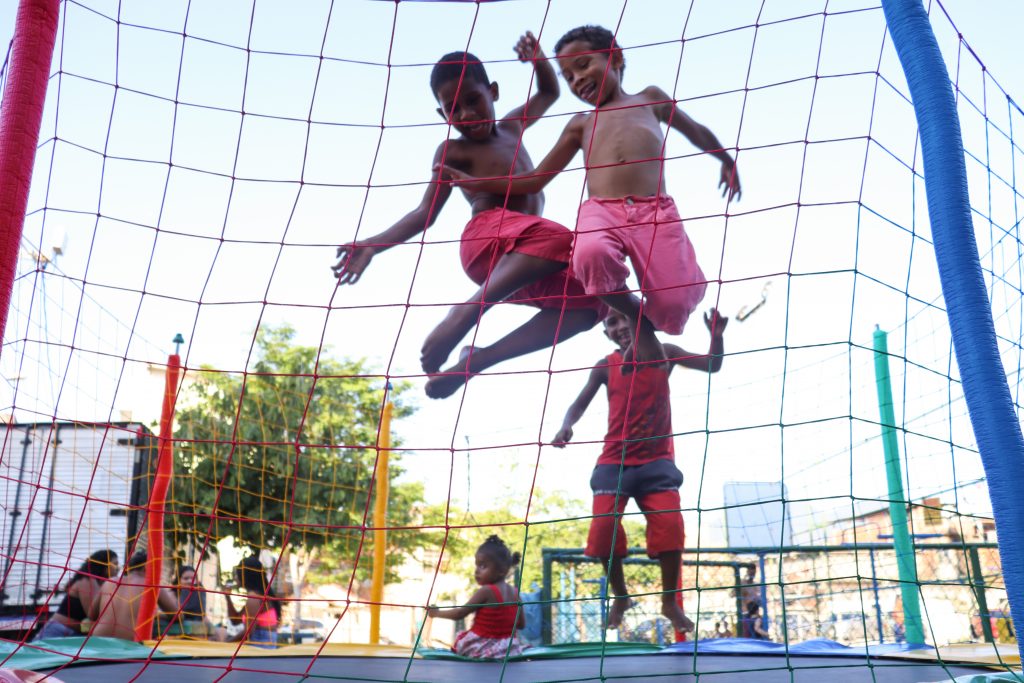 At the beginning of September, a Military Police armored personnel carrier (known as a caveirão, or big skull) knocked down homes in Brejo, one of the most neglected areas of City of God. Following the tragic episode, the Military Police stated that the population would be repaid. Although the episode is sad and alarming, the reality of those who live in City of God is very different from what is shown in mainstream media. Initiatives like Casa Dona Amélia and Marginal are a few examples, created by people inside the favelas that value the potential of the territory and its residents. 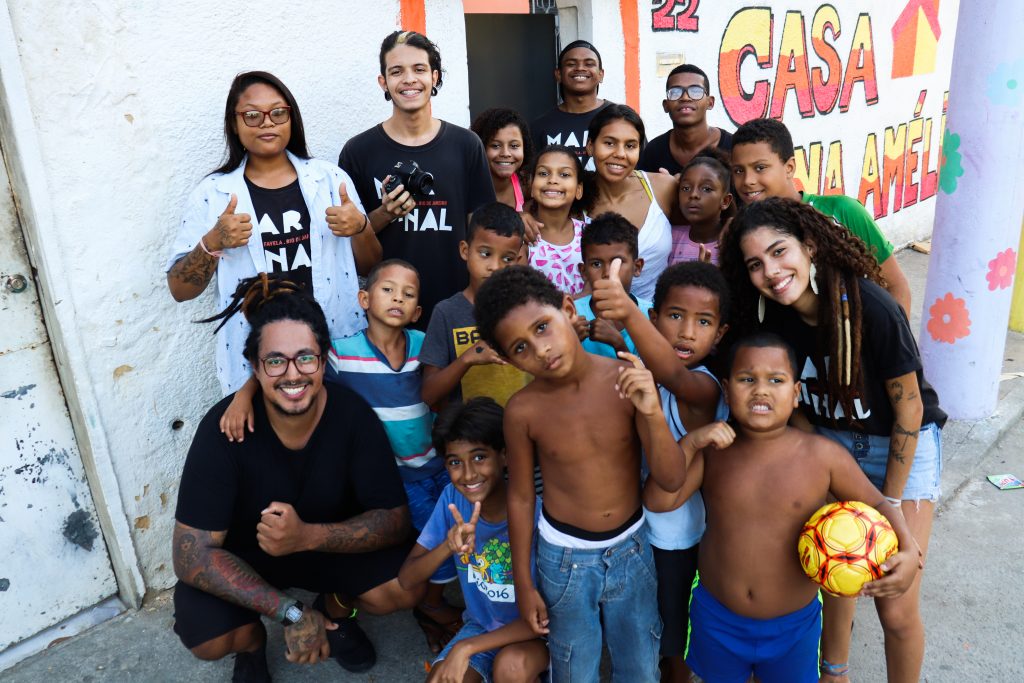 “I hope that City of God residents keep the hope of a better favela alive, with guaranteed rights, with greater access and opportunities,” says Edgard. Beyond keeping an eye on the favela, we need more eyes focused on favela children so that we can reach a fairer and less unequal Rio de Janeiro.

Beatriz Carvalho was raised in Vilar dos Teles, São João de Meriti in the Baixada Fluminense. She is a journalist, media activist, feminist, and organizer with Mulheres de Frente.