We are suffering from police invasions across three consecutive days in some Maré favelas, located in Rio’s North Zone. Since yesterday morning, Friday July 29, residents have heard shots all day long and have been unable to come and go from their home.

I, for example, haven’t been able to leave my house until now. During the day I had to dive to the ground several times in my home to avoid being hit by bullets. These are bullets that kill, that kill us, that prevent us from living and moving through the city. 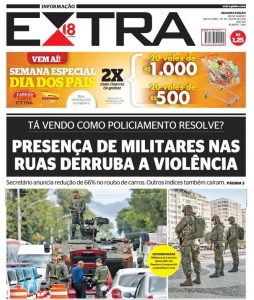 For yet another day classes were canceled for some schools in the Maré favelas. Innumerable children without class, innumerable people unable to go to work, many businesses closed all day Friday. Ironically, on the front page of the day’s Extra newspaper, the headline read “Military Presence in the Streets Slashes Violence.” It makes us wonder, brings down violence where? This peace they claim to have in the city is for whom and in whose name? Why are the favelas always massacred in the name of a mega-event? Why do we have to pay with our lives for an event put on for a rich minority of the population? Why, and to what end, must we hear shots since the dawn of Friday?

In conclusion, it is important to say that this is an invented war, that the War on Drugs is an invented war, because in the favelas there are no weapons factories, and even less drug cultivation. But we are the population that society finds acceptable to kill, to exterminate, that a majority pretends not to see, that doesn’t even want to know, that even cheers for this terror that we are suffering today in the Maré.

Gizele Martins is a community journalist from the Complexo da Maré favelas.