This is our most recent article in a series created in partnership with the Behner Stiefel Center for Brazilian Studies at San Diego State University, to produce articles for the Digital Brazil Project on human rights and socio-environmental justice in the favelas for RioOnWatch.

The virtual panel on October 14, “Favela-Academia Dialogue: Necessary Steps Toward Environmental Education,” organized by the Sustainable Favela Network’s (SFN)* Working Group on Environmental Education, discussed the tensions in the relationship between universities and favelas. The participants condemned common patterns of academic approaches toward favelas, while also offering up new modes of thinking that aim to reconfigure this often exploitative relationship. The Zoom teach-in was part of UN-Habitat’s 2020 Urban Circuit, was livestreamed on their YouTube channel, and illustrated by artist Geisa Paganini.

The panel was comprised of Fransérgio Goulart, executive coordinator of the Right to Memory and Racial Justice Initiative and developer of the “What and for Whom does Favela Research Serve?” discussion forum; Daniel Fonseca of the Laboratory of Action and Research in Environmental Education (LAPEAr) at the Federal University of the State of Rio de Janeiro (UNIRIO); Camilla Reis, also of LAPEAr; Gildete Barros, principal of Brito Broca public elementary school in Morro da Formiga favela; Iara Oliveira, cofounder of the education initiative Alfazendo in the City of God favela; Zoraide Gomes, known as ‘Cris dos Prazeres,’ of ReciclAção in Morro dos Prazeres favela; Verônica Parente, director of the Green School Project in Cidade Alta; and Alan Brum of the Roots in Movement Institute (Raizes em Movimento) and its CEPEDOCA initiative in the Complexo do Alemão favelas. The discussion was moderated by Iamê da Silva of the Federal University of Rio de Janeiro’s Laboratory of Plant Ecology, a member of the SFN’s Working Group on Environmental Education. 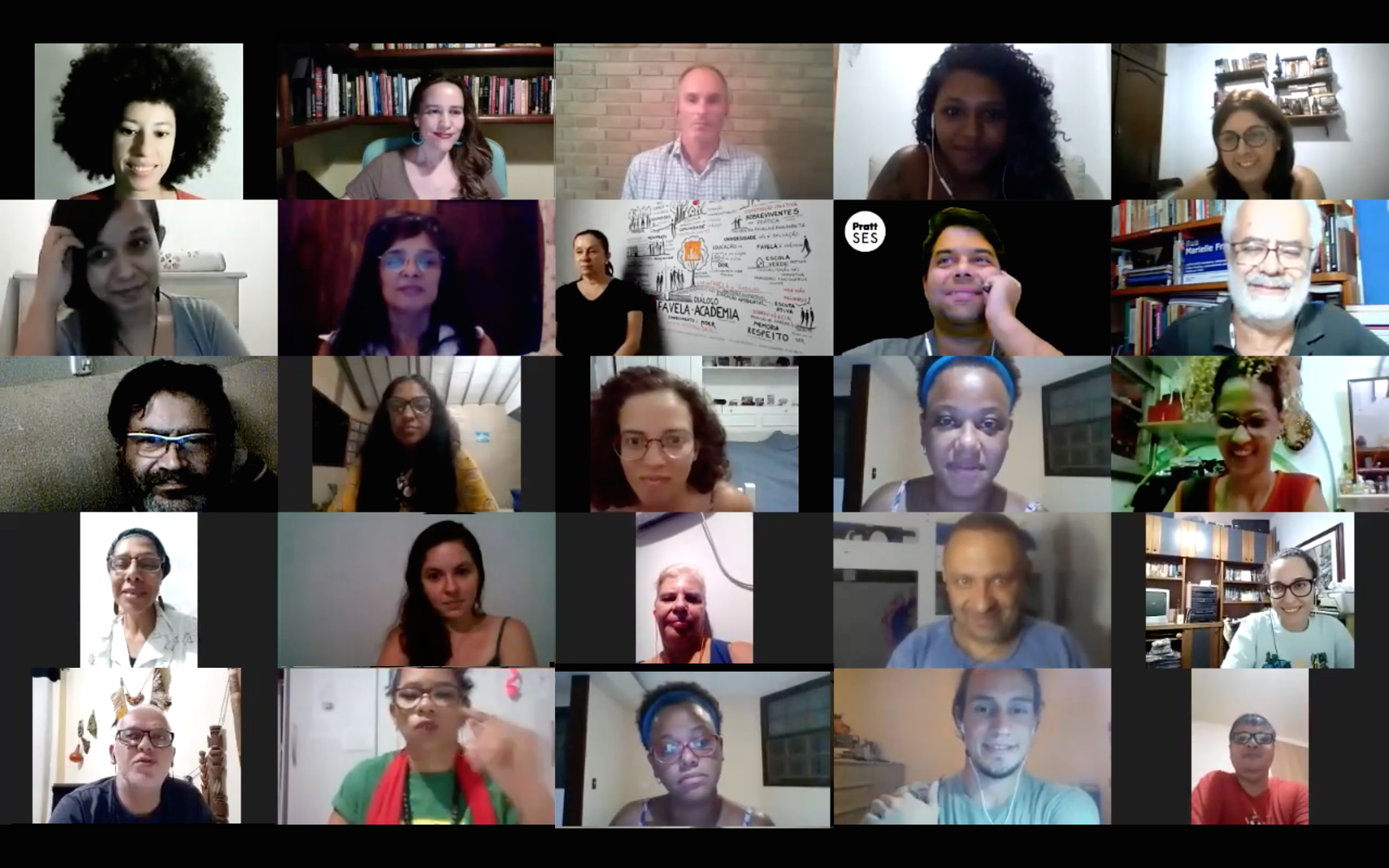 “We are a country of labels, of titles. We are not a country built for the manual laborers, for those who have built this city, this state, this country. We, the people [in favelas], are not academics, but we have so much knowledge, which is built through our responses to challenges and threats,” said Gomes, expressing a common understanding at the event—that favelas are producers of knowledge through their constant invention and reinvention in the face of challenges—and that rather than recognized for it, are often exploited.

“Academia… has always been a source of unease and frustration for me,” Gomes continued, urging academics to understand that the favela “is not a safari… It’s a place of living, of [building] understanding, knowledge.”

Oliveira echoed Gomes, saying that many researchers working in favelas “say we are creative, but we are just survivors. What people learn at university, we learn on the job.”

Describing the relationship between favelas and academia, Goulart said there is a “salvationist vision” which underpins academics’ desire to conduct research in favelas: “they think that with their theses they are going to change the world!”

Brum and Goulart shed light on the linguistic appropriation and hierarchization adopted by many academics. “Just get down off your pedestal,” stresses Brum, who denounces the use of academic language as a means to impose a false sense of superiority. Brum also says that researchers must not oversimplify their dialogue; people in the favela will understand a “normal human being who is speaking as one equal to another.” Both linguistic oversimplification and using elaborate vocabulary to construct a hierarchy of power, Goulart adds, “is the role of the colonizer.”

Fonseca affirmed this understanding of what is driving the systemic nature of the problem: the “university is a construction of the colonizer,” and as a result, remains a Eurocentric institution, which views the other as an object.

Favela residents, both with a foot in academia, Goulart and Brum lamented that the wealth of academic literature on favelas has done little to change life there. In light of this, one of the central tenets of Brum’s work at CEPEDOCA (Center for Research, Documentation, and Memory of Complexo do Alemão) is to scrutinize “the rigidity of academic knowledge and its historical processes,” whilst also “creating spaces and pathways for the flow and production of knowledge [from the favelas].” CEPEDOCA has, since 2013, provided a convening platform for all researchers working in the large complex of favelas of Alemão, whereby universities acting in the area must engage with residents to develop research with them in ways that benefit and empower the community.

The panelists agreed that change needs to come and that this can come both from a recognition of the failures of existing structures and a proactive, bottom-up and cooperative effort (between favela residents and academics) to transform them.

Affirmative action policies have made inroads to democratize Brazilian universities. Fonseca described the Federal Law of [Affirmative Action] Quotas “changes the university landscape in a very radical way.” The law requires 50% of spaces at public universities to be reserved for students who attended public high schools. Within the reserved spaces, the percentage of black, mixed race and indigenous people must be proportional to the latest official census, and 25% of the spaces must go to students with household incomes of a Brazilian minimum wage (approximately US$185 per month) or less.

While affirmative action has ensured that university demographics are somewhat more reflective of Brazilian society, research carried out using the federal Higher Education Census suggests that non-disclosure of racial information remains common, making monitoring the success of the Law of Quotas more difficult. Fonseca said that the current government is a threat to affirmative action in Brazil.

Panelists also discussed the cultural barriers that hinder full diversification of education. Reis said that when she began her Master’s at UNIRIO, there was only one other black student. “We get in, but we do not attend the same university as everyone else,” she said, noting how she very rarely saw students of color in the university’s social spaces. “We [must] create a university from within the university… so that we can think in another way,” she said.

In order to encourage more children from favelas to attend university, Oliveira said that preliminary research must assess the needs of each community. She has done this research for many years through her community organization, Alfazendo, in City of God, and said that many children are illiterate in the first place, making universal college attendance impossible.

Brazilian Institute of Geography and Statistics (IBGE) figures from 2018 show that, in Brazil’s southeast region, where Rio de Janeiro is located, 26.3% of black and brown 18- to 24-year-olds are out of school with fewer than eleven years of formal education completed (12 years would constitute completing high school). The same is true for only 13.6% of their white counterparts. Among Brazilians with the lowest 20% of per capita household incomes, the portion of black and brown youth out of school without 11 years of formal education rises to an astounding 44.6%. Meanwhile, while 53.2% of white Brazilians who complete high school enter higher education, only 35.4% of black and brown individuals do. 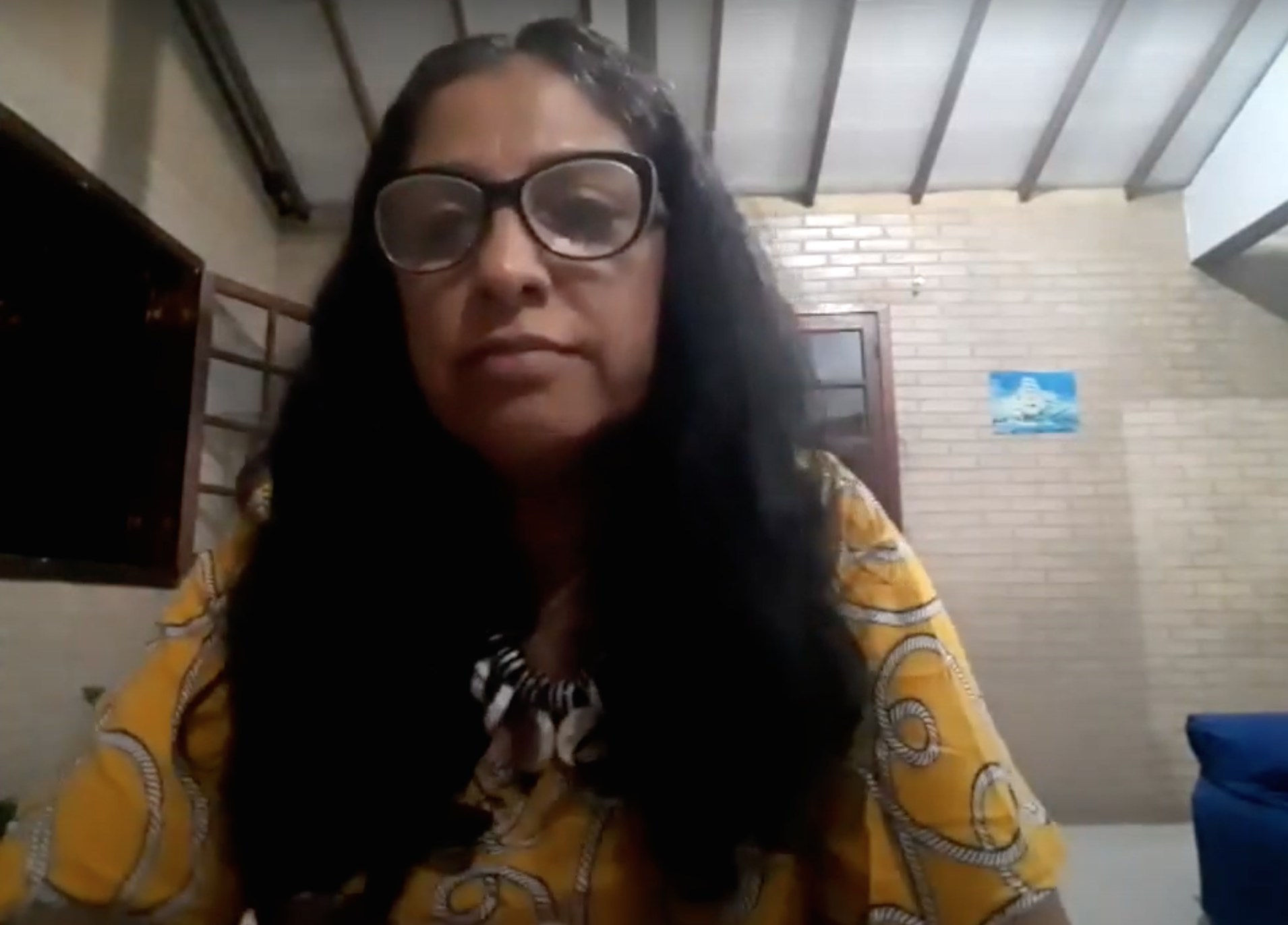 It was highlighted by the group that many researchers working in favelas, rather than recognize the construction of knowledge individually and collectively by favela residents, end up appropriating and packaging it for their own benefit.

Oliveira expressed that the opposite should take place, that the researcher must “look at the favela and treat [their research] as a mechanism for social growth,” and not as an opportunity for individual academic progress. The social role of the university, for Oliveira “is to think of ways in which they can improve people’s quality of life, independent of where they are.” It is paramount for universities to “think of a society which is not based on a negation of rights,” which is so frequently how favelas are viewed by academics.

Discussing pathways to change the way favelas are treated by academia, Barros said researchers must ensure their relationship with the subjects are not “fortuitous.” It is fundamental, she says, for researchers to know the purpose of their study. And research methods must be tailored to each community, said Barros: “favelas aren’t all the same, the people aren’t the same, the groups aren’t the same.”

Parente is a scientist who went through the traditional academic channels, but then out of frustration with academia’s distant discourse, launched a very hands-on environmental education program in partnership with a public school. She said that rather than viewing work in favelas as a favor, academics should instead aim to build longstanding relationships with communities that are reciprocal and equitable. Her Green School Project, which involves public school teachers and workers such as cafeteria servers in environmental education initiatives, is a model of tailored, appropriate and responsive environmental education.